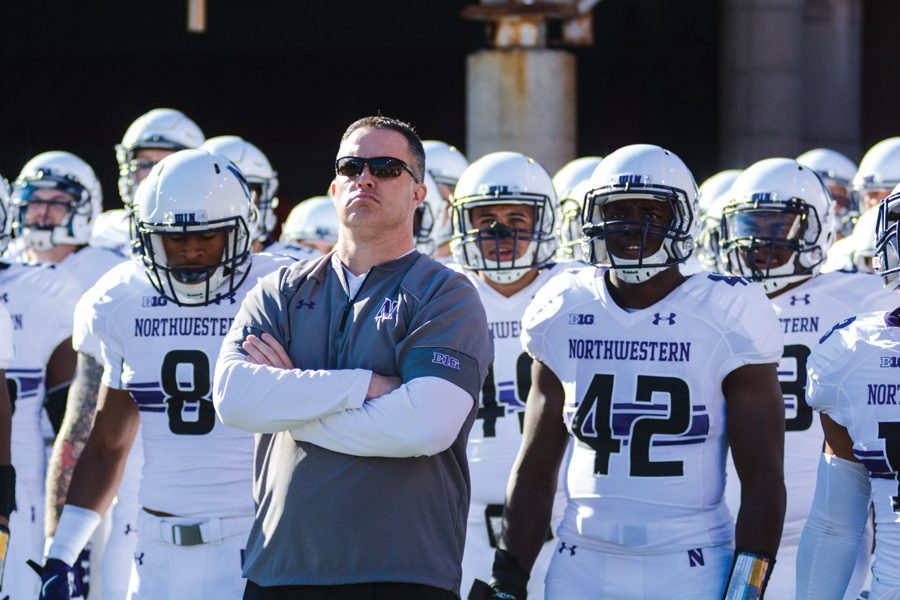 Pat Fitzgerald stands with the football team before a game. Tim McGarigle will join Fitzgerald’s staff as safeties coach in 2018.

McGarigle worked as a defensive quality-control coach for the Green Bay Packers in 2017. The Packers fired their defensive coordinator, but nonetheless wanted to retain McGarigle, according to the Chicago Tribune.

Instead, McGarigle will return to his alma mater. From 2002 to 2005, McGarigle racked up an FBS record 545 tackles for the Wildcats. Tackling statistics have only been recorded by the NCAA since 2000.

After his 156-tackle senior season, McGarigle was drafted in the seventh round of the NFL draft by the St. Louis Rams. McGarigle stuck on the practice squad in his first year before appearing in 12 games in 2007, his final season season in the league.

McGarigle began his coaching career in 2011 as a graduate assistant at NU, moving to Western Michigan University to work as a linebackers coach from 2012 to 2015. He took his talents to the Illinois Fighting Illini in 2016 before moving onto the Packers the next year.

He will take over the job from retiring defensive backs coach Jerry Brown. Brown was the longest tenured member of the coaching staff before retiring at the end of the season. His job has since been split in half, with cornerbacks coach and special teams coordinator Matt MacPherson handling the other members of the defensive backfield.