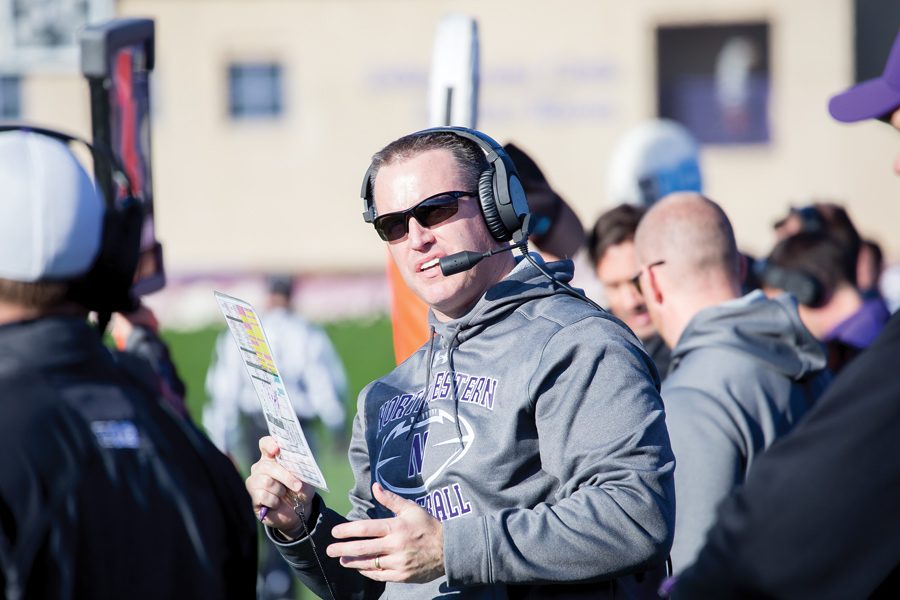 Pat Fitzgerald has a conversation on the sideline. Lou Ayeni is the newest addition to Fitzgerald’s staff and is set to serve as running backs coach.

Northwestern hired Lou Ayeni to be its running backs coach and recruiting coordinator, the athletic department announced Monday. Ayeni, a former running back and safety for the Wildcats from 2000 to 2003, will take over for Matt MacPherson, who will become NU’s special teams coordinator and cornerbacks coach.

Ayeni spent the last two years as associate head coach and running game coordinator at Iowa State. The Cyclones, however, were 116th in the country out of 129 FBS teams in rushing yards per game in 2017; Northwestern was 52nd. Ayeni spent four total years in Ames, Iowa on the Iowa State coaching staff.

After graduating, Ayeni played in the NFL for two seasons, spending one with the Indianapolis Colts and the second with the St. Louis Rams. He then began his coaching career as a graduate assistant at his alma mater before working as the run game coordinator for the University of Toledo.

MacPherson steps into part of a role vacated by former defensive backs coach Jerry Brown, who retired following the Music City Bowl. Brown was NU’s longest tenured assistant, spending 25 years in Evanston. Ayeni is the first addition to the staff in seven years.

Northwestern has not listed anyone on the football coaching staff as special teams coordinator in recent years.