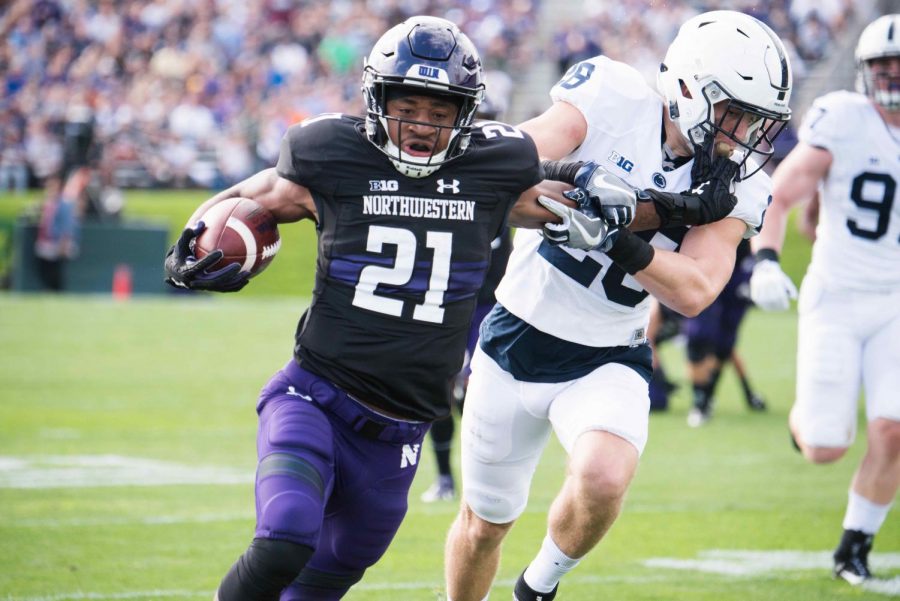 Justin Jackson runs with the football. The senior running back starred in Northwestern's win over Pittsburgh in the Pinstripe Bowl last December.

When the Wildcats take the field in Nashville on Friday, they’ll have an opportunity to make two kinds of history.

No. 21 Northwestern (9-3, 7-2 Big Ten) can win its eighth consecutive game — a feat accomplished just once in the same season since 1903, when the Cats counted victories against alumni and two high schools — and second straight bowl victory when it takes on the fellow Wildcats of Kentucky (7-5, 4-4 SEC) in the Music City Bowl.

For NU, the game marks an opportunity to complete a sweeping turnaround from a disappointing 2-3 start to the season that vaulted the Cats up the Big Ten standings and national rankings. A victory would also be just the fourth bowl triumph in program history, coming a year and a day after NU upset No. 23 Pittsburgh in the Pinstripe Bowl at Yankee Stadium.

That victory came after an up-and-down regular season and was widely considered to be the Cats’ finest win of the year.

“I thought when we took a big step was when we got to New York last year,” coach Pat Fitzgerald said in an interview this month with The Daily. He said postseason preparations have been just as strong this time around.

“I would say we’re right in line with where we were at this point (last year),” Fitzgerald said. “We’re where we need to be.”

The game will also be a swan song for a handful of decorated seniors. Running back Justin Jackson, who tallied a career-high 224 yards in the Pinstripe Bowl, will leave Evanston as NU’s all-time leading rusher, defensive tackle Tyler Lancaster spearheaded a dominant run defense while wearing the vaunted No. 1 jersey, and safeties Godwin Igwebuike and Kyle Queiro have been longtime standouts in the defensive backfield.

The Cats have a decided statistical advantage defensively, and Kentucky had a middling season — the Lexington-based Wildcats lost three of their last four games, allowed at least 37 points in each and compiled only 10 passing touchdowns — making NU a firm favorite among bettors and pundits.

The Cats will, however, have to contend with Kentucky running back Benny Snell, who rushed for over 1,300 yards and 18 touchdowns — both numbers superior to Jackson’s. Snell ran for a career-high 211 yards in the regular season finale against Louisville, and Fitzgerald said he will present multiple challenges for NU.

“He’s got great power. He’s got great speed. They run a Wildcat package with him where he’s got to then make some reads and do some different things,” Fitzgerald said. “Then just his toughness and his will on a lot of runs, when he’s running through contact, (he) has the ability to make you miss and go the distance.”

Before taking the field, the Cats will partake in several events organized by the bowl, including a welcome party and professional wrestling event. NU already participated in several celebratory events before departing for Nashville on Saturday, including a Jay-Z concert and a performance by the Second City improv group, Fitzgerald said.

The program will “enjoy the bowl experience,” the coach said, much as they did a season ago in New York. And if final game preparations mimic that enjoyment, NU could be primed to set some new milestones.