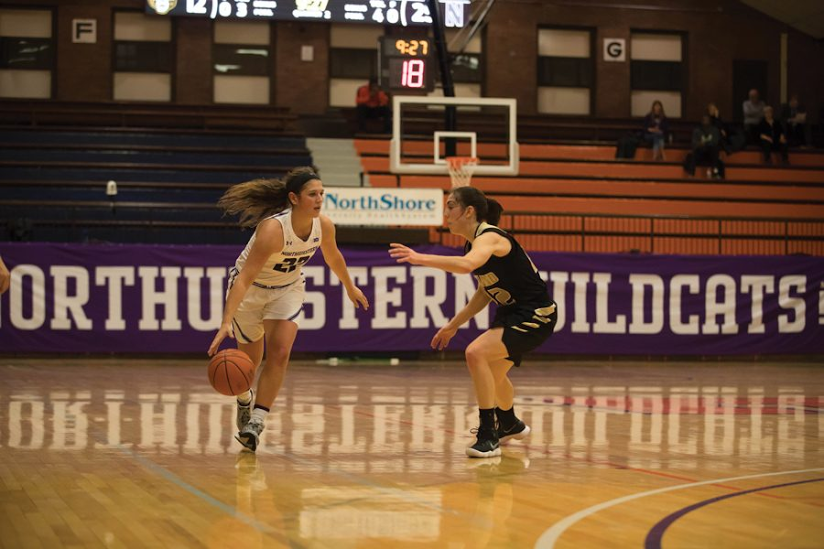 Byrdy Galernik sets up the offense. The sophomore guard had 8 points and four assists against the Panthers on Friday.

Northwestern had lost six of its last seven games, including its last three coming into Friday. Desperately in need of a victory, the Wildcats had the perfect opponent lined up in Eastern Illinois who they easily dispatched in a blowout 74-40 victory at Beardsley Gym.

The Panthers (1-10) were woeful from the tip, falling into a 24-5 hole at the end of the first quarter. NU (7-7) shot over 50 percent from the field in the opening period, while Eastern Illinois had more turnovers — seven — than points — 5.

“It was a game we needed, after (Tuesday’s loss to) Green Bay, to play well, and I thought we did,” coach Joe McKeown said. “We worked hard on switching everything, and they struggled to get the shots they wanted.”

The Cats never let up, finishing the game shooting 52 percent from the field. The offensive effort was led by freshman guard Lindsey Pulliam, who finished with 15 points on 6-for-11 shooting.

It was a balanced offensive effort for the hosts, who had four players finish in double figures, including a career high 13 points from sophomore forward Bryana Hopkins.

NU dominated on the defensive end as well, forcing 21 turnovers and scoring 20 points off those Eastern Illinois mistakes. The Cats held the Panthers to 30 percent shooting from the field. Eastern Illinois was bad all over the court, shooting 29 percent from 3-point range while making only 8-of 26 2-point attempts and hitting only 50 percent of its free throws.