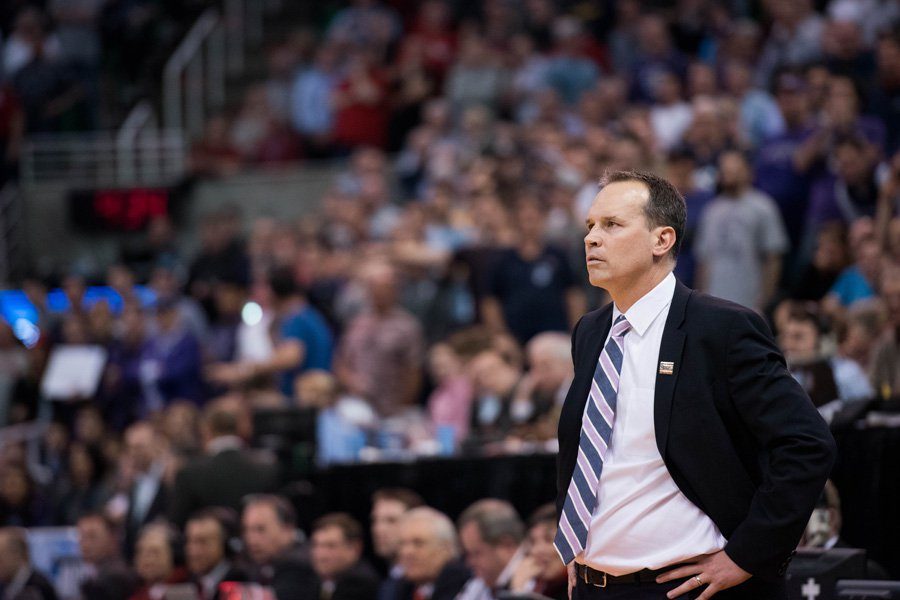 Chris Collins looks on in frustration. The coach had a lot to be concerned about Friday as his team was routed by Oklahoma.

It took one shot by Oklahoma freshman star Trae Young — an effortless floater in the lane, while drawing a foul, just 48 seconds in — for Northwestern’s night to start going downhill.

Then it fell off a cliff.

With top defender Vic Law missing his second consecutive game with a concussion, Young consistently exploited the Wildcats’ shorthanded defense with pinpoint passes, deep 3-pointers and everything in between, powering the No. 17 Sooners (10-1) to a dominant 104-78 win on Friday night.

Young finished with 31 points and 12 assists, easily overshadowing the team leaders for NU (9-5) in both those categories — junior center Dererk Pardon with 17 points and senior guard Scottie Lindsey with three assists.

Oklahoma’s eruption marked the first time the Cats have conceded triple-digit points since 1995, and the 26-point final margin of victory understated the lopsidedness of the game.

Junior guard Jordan Ash filled Law’s place in the starting lineup and made his team’s first two shots of the game, but that was the only bright spot for the Cats in the opening minutes. The Sooners made their first six 3-point tries and jumped out to a big edge, then continued to milk that lead as the frame moved along, eventually leading 68-38 at the break.

Although Pardon found success inside early on, his layups weren’t enough to allow the Cats to keep pace with the run-and-gun hosts. Oklahoma scored more points in the first half alone than NU had allowed in each of its last four games.

The Cats managed to keep pace in the second half, but were unable to cut significantly into the deficit. Sophomore forward Aaron Falzon found a bit of a rhythm from deep, but Lindsey failed to escape another disastrous outing, making just 1-of-12 shots on the night.

Every statistic in the final box score heavily favored the hosts, but none more so than 3-pointers: NU made just 8-of-28, while Oklahoma drained 17-of-28. The lack of Law’s length and athleticism on the exterior, coupled with Young’s seemingly near-limitless range, doomed the Cats in that regard.

Falzon, Ash and senior guard Bryant McIntosh each added 12 points, while Christian James tallied 19 points — all in the first half — to rank second on the Sooners in scoring.

The Cats will close out their non-conference schedule, after a weeklong break, on Dec. 30 at home against Brown.