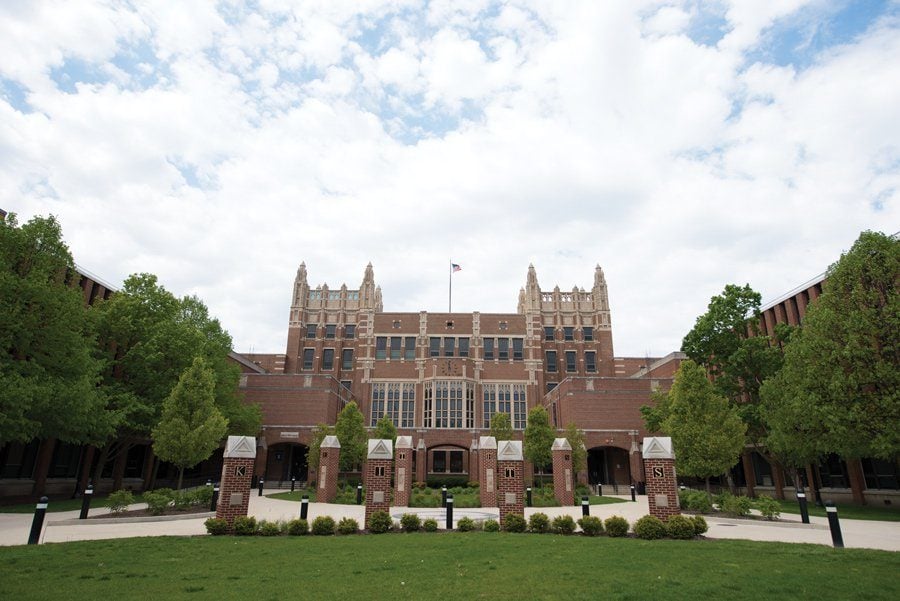 Evanston Township High School, 1600 Dodge Ave. On Nov. 21, Daniel Romain brought forth his own lawsuit against former teacher Bruce Siewerth, ETHS and the District 202 Board of Education.

In light of allegations that a former Evanston Township High School drama teacher sexually abused students, Daniel Romain — one of the claimants — wanted to put a name and face to the legal complaints.

Romain graduated from ETHS in 1985 and had been a part of the theatre department for each of his four years at school. On Nov. 2, roughly a month after the first two lawsuits were filed against former teacher Bruce Siewerth, ETHS and the District 202 Board of Education by “John Doe” graduates — Romain brought forth his own lawsuit in the Cook County Circuit Court.

“I have no reason to not put my name out there. I haven’t done anything wrong. I was the victim,” the Evanston resident said. “If I can be part of helping stop the cycle, I am happy to put my face on it.”

Siewerth, who retired from ETHS in the 1990s, denied the allegations and has not been charged with any crime in connection with the claims.

“I’m moving them around on stage and showing them what to do and stuff but not, not groping,” Siewerth said in an interview that aired on WGN on Oct. 25. “I’m not Trump. I don’t understand it. So … I don’t get what’s going on or why it’s going on now.”

Claims of abuse first emerged around Oct. 10 when former ETHS students — inspired by those speaking out against Hollywood producer Harvey Weinstein — began sharing their stories on social media. Many alleged they had been sexually abused by Siewerth, which prompted an investigation by the Evanston Police Department.

Evanston police Cmdr. Joseph Dugan confirmed the police investigation was still ongoing. Dugan told The Daily in an email that officers are working to narrow down timeframes for the allegations to compare with what the statute of limitations was at that time.

ETHS graduate and screenwriter Jeffrey Lieber told The Daily in October he was the first to share his story in a closed Facebook group for alumni of a popular school show, YAMO, after learning the teacher bought a ticket to attend the show’s 60th reunion on Oct. 15. Within 24 hours, Lieber said his post had nearly 300 comments, a third of which were from people detailing their own experiences.

Prompted by the post, Romain spoke with other ETHS graduates and Evanston police, and he was later connected to Evan Smola, one of the lawyers for the “John Doe” lawsuits.

In his lawsuit, Romain seeks more than $50,000 from the defendants. Romain alleges Siewerth made unwanted, physical contact with his genitals during the fall of his freshman year at a rehearsal for “Hamlet.”

Romain told The Daily that a group of students were wearing tights as part of the costume with a dance belt that wrapped between the legs and around the waist. He claimed Siewerth inspected whether students had worn the costume correctly.

“He pointed at my crotch and then said, ‘Hey you’re pointing the wrong way,’” Romain said. “And before I could figure out what that really meant, his hand was down the front of my tights and he was adjusting the direction of my penis.”

Romain, who was 14 at the time, said the advance felt wrong, but he “put the incident away” and believed — because Romain didn’t object to the touch — he would now be “accepted” into the theatre community.

Following that rehearsal, Romain alleged, there were no other physical incidents, just conversations in which Siewerth would verbally taunt him or use sexual innuendos.

The lawsuit also alleges ETHS and district officials did not properly investigate claims regarding Siewerth and holds them accountable, despite not naming specific individuals.

Although Smola did not respond to multiple requests for comment, he told The Daily in October that the firm can’t get Siewerth’s personnel documents until the case is filed, so the attorneys do not know exactly who knew what and when. However, Smola said, they know a female student reported the conduct she observed to the administration at the time.

ETHS could not be immediately reached for comment, but in an Oct. 18 statement, superintendent Eric Witherspoon said the district had initiated its own internal review, is cooperating fully with the EPD investigation and reported the allegations to the Illinois Department of Children and Family Services as well as the Illinois State Board of Education.

Romain said any compensation he may receive will either go toward a group working to educate communities about abuse, or toward creating his own foundation to do the same. He said he would like for more people to publicly talk about the “open secret,” and he knows others are considering filing lawsuits too.

“It’s a difficult topic true, but not difficult to talk about it,” he said. “I’m understanding better each time I talk about it what really happened, and I’m working through how that may have affected me then as well as now.”