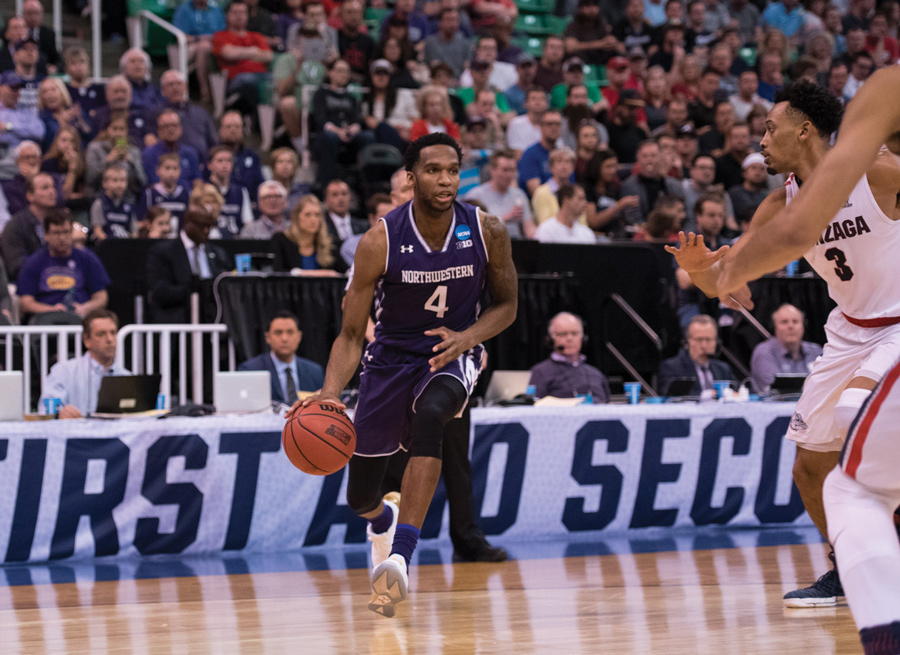 Vic Law takes a dribble. The junior led the Wildcats with 18 points against Valparaiso on Thursday.

Northwestern cruised to its second consecutive dominant nonconference victory on Thursday, blitzing Valparaiso from the start and never letting up in the 84-50 rout.

The Wildcats (7-4) made their first six 3-pointers of the game, jumping out to a 27-10 lead less than eight minutes into the game, and the Crusaders never caught up thanks to stifling defense from the hosts.

That explosion was led by Vic Law, who made his first four attempts from beyond the arc, drawing a foul on the final one for a four-point play. Just six minutes into the game, the junior forward already had 13 points. Law finished with 18 points to lead all scorers.

“The offense is a lot better when we’re moving the ball around,” Law said. “We’re getting easy shots, a lot from inside out.”

The Cats cooled after their scorching 7-for-8 start from deep, but still finished the game shooting 55 percent from 3-point range.

NU took full advantage of the Valparaiso’s (8-3) aggressive, trapping zone defense. Multiple late rotations by the visitors gave the Cats open 3-pointers, and NU’s cadre of shooters knocked them down.

“When you face a lot of zone, you’re going to get more threes,” Collins said. “The 3-point shot is what we do, and I think we have good shooters… It’s a big part of our attack.”

On the other end, the Cats shut down the Crusaders all over the floor, and Valparaiso struggled mightily on the offensive end while missing its leading scorer, Tevonn Walker, who sat out with mononucleosis.

The Crusaders shot 39 percent from the field and committed 21 turnovers. NU jumped on the opportunities, scoring 30 points off turnovers and attempting 22 more shots than the visitors. Valparaiso had only eight assists. Senior guard Bryant McIntosh had five.

“We have length and we have quickness,” Collins said. “Our guys, I just feel like they’re getting more instinctive. We’re reading passing lanes a little bit better… our instincts defensively our really picking up which has led to a lot of turnovers.”

On the other side, the Cats took excellent care of the ball. NU, which has had double digit turnovers in seven games this season, committed only seven against Valparaiso despite that aggressive defense.

The Cats repeated their scorching first half start in the second frame, coming out of halftime on a 19-2 run to expand the lead to 62-28 behind a balanced offensive attack and continued strong defensive play.

Once again, Chris Collins was able to turn to the bench to close out the second half, with senior forward Gavin Skelly leading the reserves with 12 points and pulling down 10 rebounds as well. The backups poured in 30 points combined against Valparaiso.

“For me, coming off the bench, the first four minutes when I don’t play I kind of see how everything goes down,” Skelly said. “I see how Aaron plays his man, how his man plays Aaron, so for me that’s kind of nice.”

NU is back in action when it visits DePaul on Saturday.