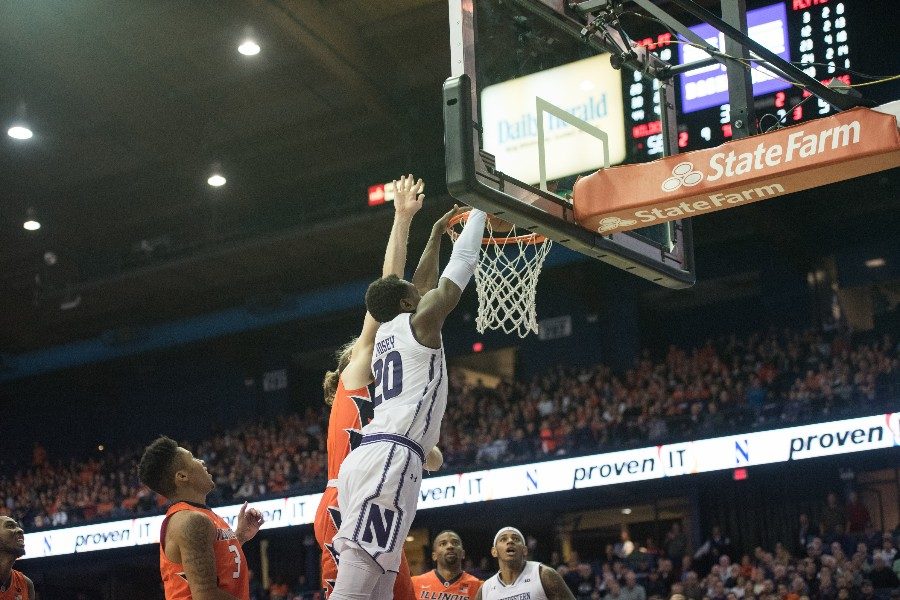 Scottie Lindsey dunks over a defender. The senior guard overcame a slow start to score 22 points in Northwestern's overtime win.

Fresh off a trying last-second loss to Georgia Tech in which he failed to score a bucket, senior guard Scottie Lindsey started Friday’s contest on the bench.

“I knew that I played a really bad game,” said Lindsey of Tuesday’s matchup. “That was just motivation itself to come out and play.”

Lindsey did not let it spiral into a second straight sour performance, instead leading NU (5-3, 1-0 Big Ten) to a 72-68 overtime victory over the Fighting Illini (6-2, 0-1) as he poured in 22 points against an aggressive Illinois defense.

“Everyone knows (Lindsey) had a tough night the other night in Atlanta,” coach Chris Collins said. “He responded. He made some big-time plays, big-time shots.”

Lindsey entered the game with barely two minutes elapsed, but struggled for much of the first half and entered the break 1-of-7 from the field. Junior forward Vic Law said he noticed that Lindsey seemed to come up short on some of his first-half attempts as the senior looked to establish himself.

With Lindsey in a funk and foul trouble nagging the Cats, Illinois took a 36-32 advantage into halftime. Facing down an announced crowd of 10,017 largely filled with Illinois faithful, the Cats struggled to find answers against the Fighting Illini’s defensive pressure.

“We haven’t had a team really deny us all the way out there this season,” Lindsey said. “Illinois ramped it up on defense.”

Illinois coach Brad Underwood said that the team entered the game looking to make the guard’s touches difficult. But Lindsey did to get the free throw line seven times in the first half, and he said he found a rhythm that translated to an explosive second half.

“He stayed aggressive,” said Law, who scored 16 before fouling out. “And he did a great job talking to me, telling me to stay aggressive, keep looking for my shots.”

In the second frame, Lindsey posted 10 points on 4-of-7 shooting as NU found the offensive groove it lacked in Tuesday’s 1-point loss to Georgia Tech.

Lindsey’s strong second-half helped push the game into overtime. The extra session proved chippy and physical, and an Illinois free throw represented its only score through two minutes. When Lindsey found himself free on the wing following a rebound, he didn’t waste the chance, nailing a 3-pointer to give NU a 66-64 lead. The Cats never trailed again.

Illinois managed to tie the game at 68, but Lindsey responded with a perfect trip to the stripe to cap his impressive night.

After a block from junior center Dererk Pardon and a pair of free throws from sophomore guard Isiah Brown, NU escaped with the win to avoid starting Big Ten play .500 overall.

“It was a must-win for us and definitely a program game,” Lindsey said. “We just said … that we weren’t going to lose this game. We have the experience, we’ve been here before.”