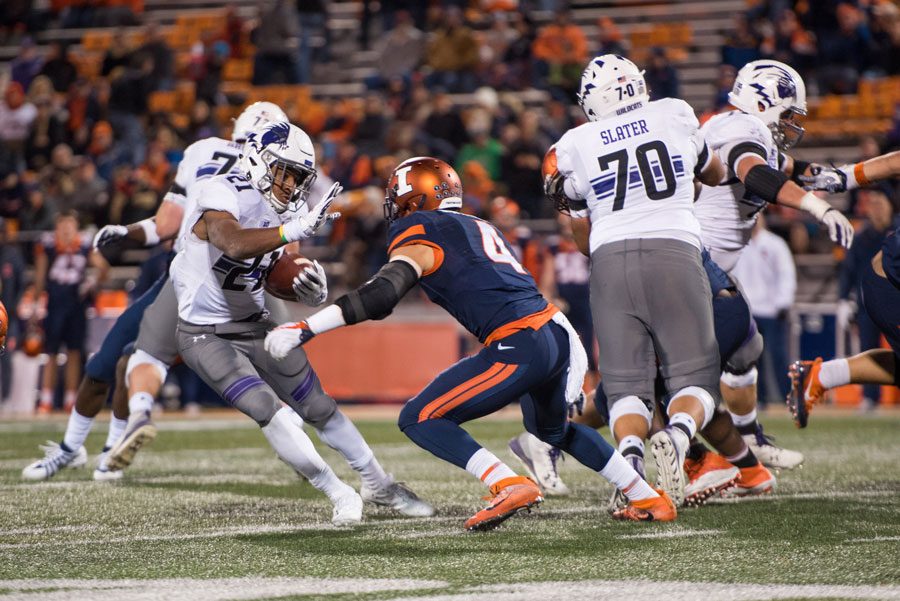 Justin Jackson jukes. The senior running back picked up 144 rushing yards against Illinois on Saturday.

CHAMPAIGN — As a freshman in 2014, Justin Jackson experienced a season-ending loss to Illinois that kept Northwestern out of a bowl.

Three seasons and three decisive wins in the rivalry series later, the Wildcats’ senior running back had the final word after an authoritative 42-7 victory Saturday in Champaign.

“I’m glad we can go out beating them like that,” Jackson said. “They’re a team that (is) going to try and talk trash, whatever, even if they’re down by 40. … We go out there and do our job, win big and get out of here.”

Jackson’s 144 yards and another dominant defensive performance helped No. 22 NU (9-3, 7-2 Big Ten) pull away after a tight first half to win its seventh consecutive game overall and retain the Land of Lincoln Trophy for another year.

Offensively, the Cats rolled up 306 yards on the ground with Jackson, redshirt freshman running backs Jeremy Larkin and Jesse Brown, and senior receiver Jelani Roberts all the finding the end zone. After the game, coach Pat Fitzgerald credited strong offensive-line play for his team’s rushing success against a defense that predominantly plays man-to-man defense.

The Fighting Illini (2-10, 0-9) and their freshman quarterback, Cam Thomas, marched to a touchdown on their first possession of the game, but could not find any rhythm after the score. NU’s defense allowed just 170 yards the remainder of the game.

“We went off to the sideline (after the first drive) and got some stuff figured out, and just tried calming everyone down,” said redshirt freshman linebacker Paddy Fisher, who made his first career interception later on. “Everyone was freaking out a little bit, and no one had anything to freak out about. I knew the outcome of this game was going to happen.”

In the second quarter, junior quarterback Clayton Thorson — who finished 13-of-21 for 140 yards passing — found senior superback Garrett Dickerson for a game-tying touchdown and then sophomore receiver Ben Skowronek for a 52-yard bomb that set up a go-ahead touchdown. The Cats took that 14-7 advantage into the locker room at halftime.

The game quickly devolved from competitive to lopsided in the second half.

Five minutes after the break, NU stretched the lead to two scores with its first defensive touchdown of the season — a sack and forced fumble by sophomore end Joe Gaziano that led to a scoop-and-score by freshman end Sam Miller.

“I didn’t know the ball even came out,” Gaziano said. “Then I saw Sam run in front of me with the ball and I said, ‘Oh shoot, I’ve got to go make a block for him!’”

Jackson broke free for a career-long 79-yard run on the Cats’ ensuing offensive series, and then punched it in on the next play to extend his team’s advantage to 28-7 and essentially put the game away.

Chippy play took over as the score grew further out of hand, with numerous personal fouls committed by both teams and one Illinois player ejected for throwing a flag at a referee. The vast majority of the announced crowd of 30,456 — a seemingly generous estimate to begin with — left Memorial Stadium long before the final whistle.

“We knew we were going to get a pretty big flurry from them early,” Fitzgerald said. “We weathered that, and then when we settled down and started to play our style of ball, 42 unanswered is a statement.”

The Cats won’t know their bowl destination for several more weeks, but Fitzgerald didn’t hold back from promoting his team’s resume Saturday night, less than an hour after they finished up a two-week period of outscoring Minnesota and Illinois by a combined 81-7 score.

“The narrative of our football team has all been based on one game, and that was that loss down at Duke when we were a little bit shorthanded. I would prefer if that narrative gets changed,” Fitzgerald said. “This is one of the hottest teams in the country, a team that’s dominated back-to-back weeks and a team that has improved more than anybody else.”