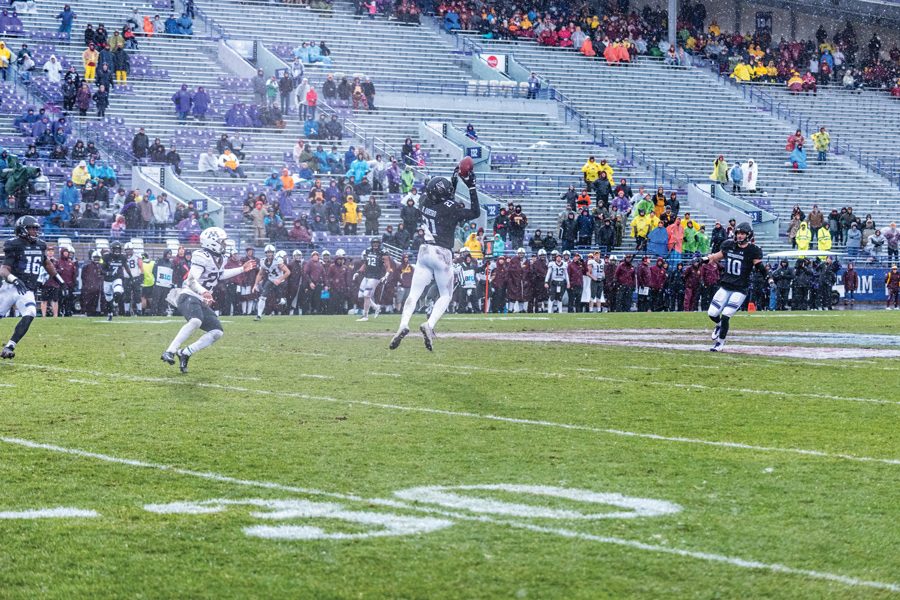 Facing down Northwestern’s stout defensive front, which sits in 13th in the nation in rushing yards allowed, many opponents this year have given up on the running game.

Instead, foes have tried to take advantage of the team’s secondary, a typically strong unit that has become a relative weakness due to youth and injuries. In Big Ten play, the No. 23 Wildcats (8-3, 6-2 Big Ten) have defended an average of more than 37 passes per game. Two teams, Michigan State and Purdue, aired it out well over 50 times.

Through the onslaught, the team’s two starting senior safeties have led the way, forcing turnovers and dishing out hits as NU has rolled up six straight wins.

Those two seniors are Kyle Queiro and Godwin Igwebuike.

“You’ve been seeing it all year,” coach Pat Fitzgerald said Monday. “We’ve had a lot of different substitutions and different guys playing in the back end, and I think the two constants have been Kyle and Godwin.”

Igwebuike is the more animated of the pair, a long-time starter who passed on the 2017 NFL Draft to return this fall. He brings heavy doses of swagger and confidence to the squad and stepped up as a leader in the defensive backfield amid injuries a year ago.

The more low-key Queiro took longer to blossom into a starting role for the Cats, but emerged as another key cog in the defense last fall. In one of that season’s highlights, he made a leaping one-handed interception against Indiana with a cast on his other hand. This fall, he has taken his game to new heights and leads the team with four interceptions.

“He has improved so much,” Igwebuike said after the team’s win over Minnesota on Saturday. “He’s putting a lot more into the season, and I think it’s paying off for him. It’s been a great blessing playing with him.”

In the sloppy Senior Day rout of the Golden Gophers, the defensive backfield turned in its finest performance. With an assist from the conditions, the Cats allowed two completions the whole game and intercepted quarterback Demry Croft three times. Queiro pulled down one of those picks, returning it 36 yards to set up a quick NU touchdown drive.

In addition to his pilfers, Queiro has filled a variety of columns on the stat sheet this season, racking up 3.5 tackles for loss and 53 tackles.

Meanwhile, Igwebuike has continued to build on his reputation as a hard-hitter and carries 68 tackles into the team’s season finale against Illinois on Saturday. He has a pair of interceptions too and has cleared the 300-tackle mark for his career.

“They both have come a long way from a standpoint of learning to be the leaders that they’re capable of,” Fitzgerald said. “Both I think were very well prepared in high school, but more lead-by-example guys. And now, as they’ve gotten older, they’ve seen they have to be more than that for us to be consistent in the back end.”

The entire unit has displayed that consistency lately, racking up seven interceptions in the last three games and allowing just two of the past six opponents to complete more than 60 percent of their passes.

And facing an Illinois team that has struggled to find a consistent passing attack this fall, the two seniors may have one more impressive regular season showing left in them.

“They’re great leaders on our team and great playmakers,” senior linebacker Brett Walsh said Monday. “Those are guys that I think a lot of offenses fear, and they’re gonna make you pay if you make a mistake.”