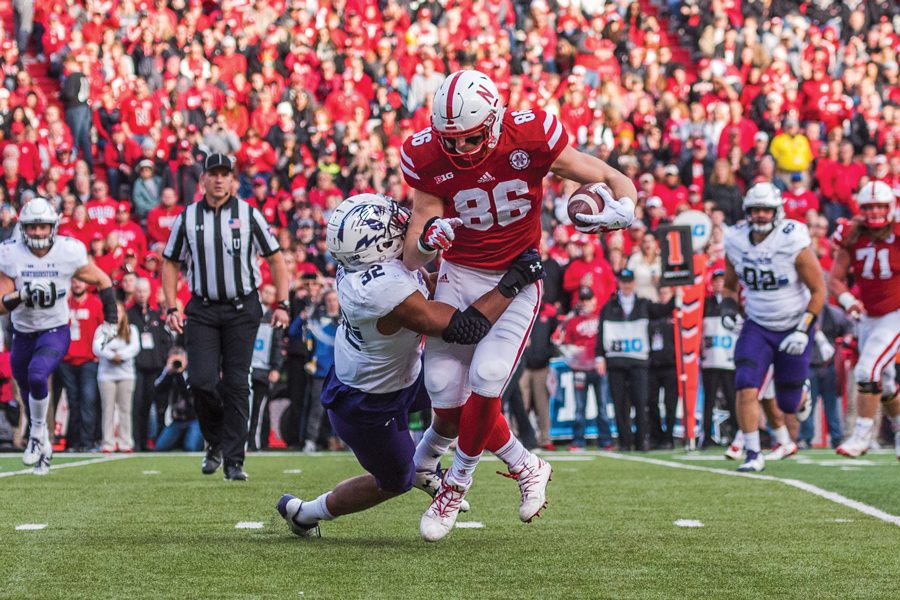 Nate Hall makes a tackle. The junior linebacker was named Big Ten Defensive Player of the Week on Monday.

A seven-tackle performance against Minnesota highlighted by an interception and a recovered fumble earned junior linebacker Nate Hall Big Ten Defensive Player of the Week honors, the conference announced Monday.

Hall also wreaked havoc in the backfield during No. 23 Northwestern’s 39-0 rout of Minnesota on Saturday, totaling 2.5 sacks. The Wildcats’ defense dominated the Golden Gophers throughout the afternoon, holding them to 182 yards in the shutout.

Coach Pat Fitzgerald said Monday that Hall was “very active” in the contest. He also joked that the linebacker was “kind of a garbage man,” in the right place at the right time.

“No, he played great. He played real physical,” Fitzgerald said. “He’s having a great year.”

Hall is the second NU linebacker to win the award this season after redshirt freshman Paddy Fisher was recognized following his performance against Michigan State.

In 2016, Hall finished with 73 tackles. He passed that number with his performance Saturday and now has 74 on the season, good for second on the team behind Fisher. Hall also leads the team in tackles for loss with 14.

“I’m just having more fun than I’ve ever playing this game,” Hall said Monday. “I improved in the offseason obviously with my technique, and then getting stronger physically, and then a lot of credit goes to the whole defense, especially those guys up front.”

The Cats will conclude their regular season Saturday at Illinois, looking to earn their ninth win of the season.