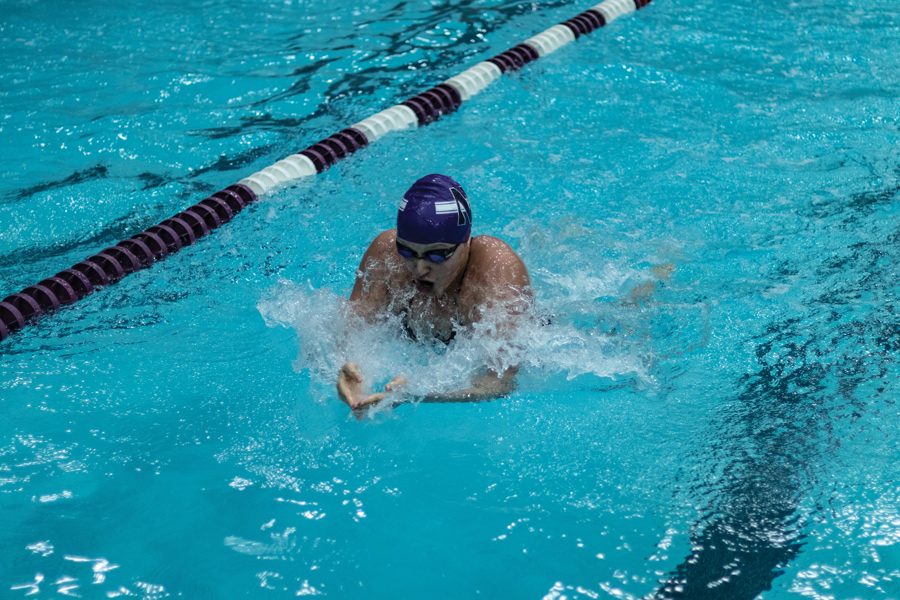 Sophie Angus swims. The freshman and the Wildcats won the TYR Invitational over the weekend.

Northwestern was a dominant force this weekend, besting seven teams in swimming and six in diving to win the annual TYR Invitational.

The Wildcats (4-3) ended the three-day meet with 1190 points, while Big Ten rival Michigan State (4-4) finished second with 705. NU maintained momentum across the board, breaking eight pool records and one school record while winning 16 of 22 swimming events and all three diving events.

“What we were going after was persistence and they were extremely persistent,” coach Abby Steketee said. “They were positive. They were persistent. They fought hard. I couldn’t be more proud.”

Warren followed Sheridan’s record-breaking swim with one of her own in the 50-yard freestyle, finishing first in 22.72 and breaking her own pool record from last year by .02 seconds.

“Being able to look at the side of the pool and look at all my teammates and give them a nice cat paw is my favorite thing in the world,” Warren said Friday. “The energy has been so exciting this meet. It’s only the first day and we’re already killing it.”

The day ended with a victorious 400-yard medley relay by Sheridan, freshman Sophie Angus, Lebl and Keane in 3:39.87, breaking the pool record set by Purdue in 2016. In diving, junior Olivia Rosendahl took the 3-meter title with a score of 333.25.

“This weekend has definitely been better than I could’ve imagined,” Sheridan said.

Sophomore Krystal Lara followed with wins in the 100-yard butterfly and 100-yard backstroke. Keane then took first in the 200 free before anchoring the winning 800 free relay with Lara, Lebl and Han, breaking NU’s 2010 pool record by nearly a second in 7:15.59.

Junior Eryn Scannell finished first in 1-meter diving with 291.65 points, and Rosendahl took second with 273.65. The Cats led by 100 team points at the end of the day.

In platform diving Sunday, NU was a definitive force, with Rosendahl taking first with 253.95 points, Scannell in second with 184.43, and freshman Sarah Gardner in fourth with 150.30.

“It’s always fun to compete platform when we can,” Scannell said. “We don’t get to compete in it often so it’s always entertaining and fun.”

To finish the weekend, Keane, Lara, Han and Warren put forth a first-place effort in the 400 free relay, finishing in 3:21.31 and breaking Minnesota’s 2016 pool record.

“Every year we want to have that record board new. As many things as we can pull down as possible the better,” Steketee said. “It’s always fun to know that the team is moving forward.”