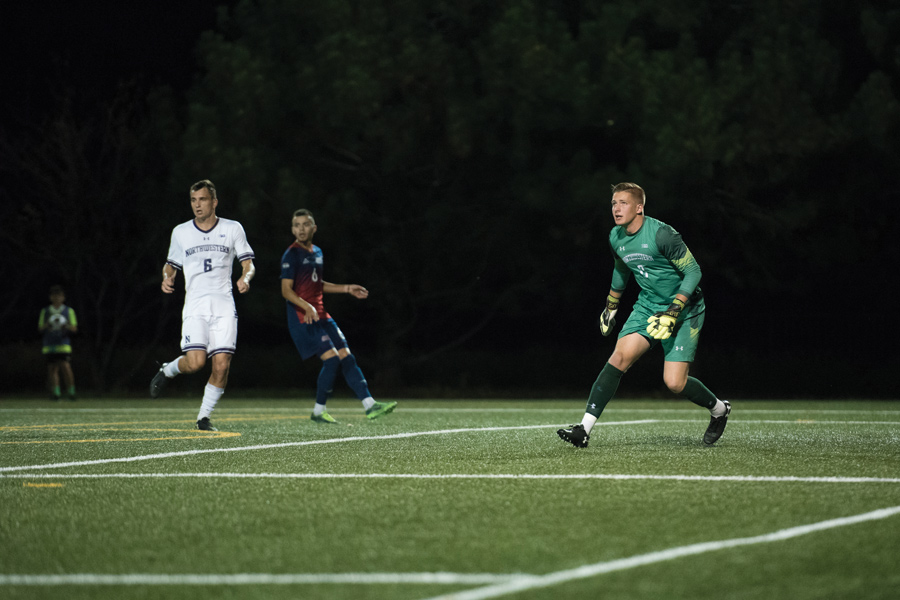 Robbie White went to his first Engage meeting with a plan to sit in the back and just listen.

It was February 2017. White, then a redshirt freshman goalkeeper on the Northwestern men’s soccer team, had played in two games during the 2016 season and was in the midst of grueling rehab for a broken foot. He had heard about Engage, a program launched in 2014 by Northwestern Athletics to give student-athletes a space to learn about building inclusivity in the athletics community, and decided to check it out.

He entered the room and saw a circle of 20 chairs, with no option to sit quietly in the back. So he took a chance and sat down, striking up a conversation with his academic adviser and another student-athlete.

Taking a seat in the circle was another step on his journey, one that had taken him from the fields of Glenbard West High School and the Chicago Fire Academy club program to a starting position between the posts for a Big Ten program. It was a journey that would eventually include a defining moment in the locker room after NU’s final spring practice in May.

His best friend, fellow junior goalkeeper Braden Thuraisingham, walked out of the locker room as White was on his way in, and told him the whole team was in the room. Thuraisingham was the first person at NU that White had told what he was about to share with the rest of the team.

White was hesitant at first, but he too knew that this was the best opportunity he’d have until the fall. So he walked in.

“Hey, I’ve got an announcement.”

White wasn’t expecting much of a reaction. There was a two-second pause. And then there were cheers.

“Literally, it was like a scene from a movie,” Thuraisingham said. “(There was) a round of applause, people came up to him and started hugging him. It was awesome.”

The Glen Ellyn, Illinois, native grew up with an idea of what he thought he wanted his future to look like. He said he put a lot of internal pressure on himself to have the same life as his parents. By Winter Quarter of their sophomore year, Thuraisingham said White’s teammates and friends were starting to witness that pressure have an effect on his demeanor.

Eventually, he decided to go to the Engage meeting.

“When I first joined (Engage), when I was starting to think about coming out … it felt great to see other athletes have that same experience,” White said. “We talked about difficult topics, and that’s the environment I wanted to be in. I started really thinking, ‘I want to join this. I want to help. Is there any way I can?’”

White said he told Thuraisingham before Easter. His teammate added that the change in White’s disposition was almost immediately noticeable.

“He’s definitely a different Robbie,” Thuraisingham said. “He’s more of himself now. He’s comfortable, and you get to see it now.”

Once he knew he had the support of his best friend, White felt ready to tell his parents. He came out to his family over Easter, and then told the other players in his recruiting class after the holiday.

When he told the rest of the team in May, he again felt reassured by the support and positivity he received.

“I started really nervous,” White said. “When I said it, the shoulders lifted, and then everyone’s response just felt great.”

After he knew he had the support of his teammates, he decided to share his story publicly. Following an interview with Outsports in October, White was recognized as the first known men’s soccer player from a Power Five conference to come out publicly during his college career.

Less than a year after he attended his first meeting, White is now one of five Northwestern athletes who comprise Engage’s executive board. He is also a member of Athlete Alliance, the community-building extension of Engage focused on bringing students, staff and coaches together to create an inclusive sports community.

Maria Sanchez, assistant athletic director for academic services and student development/diversity and inclusion, said programs like Engage and Athlete Alliance offer valuable opportunities for student-athletes to explore their identities and how those identities play out in different settings.

“We want our students to be their authentic selves because in doing so, we believe they will be the best versions of themselves,” Sanchez said. “They’ll be able to accomplish their goals academically, athletically and socially if they can be truly who they are. We want our students to have a world-class experience, and a critical piece to that is making sure we are inclusive.”

To raise awareness for their mission and promote a climate of inclusivity, Athlete Alliance hosted a coaches-versus-athletes kickball game in spring 2017 and brought former USA Volleyball player Stacy Sykora to campus in October to speak about life as an LGBTQ athlete. White noted that the University’s efforts helped create an environment in which he was comfortable publicly sharing his story.

“We’re a very progressive, open-minded, ‘anyone’s welcome’ kind of a university,” White said. “Creating those environments is essential … and not just for LGBT (people). We’re moving in the right direction.”

In 2016, NU was one of the first three universities to partner
with the LGBT SportSafe Inclusion Program, an initiative that trains coaches, administrators and staff at institutions to create an LGBTQ-inclusive athletic community, according to the program’s website.

White said there is still work to be done to make college athletics more inclusive. He encouraged other athletes to be sensitive in their use of language and be more aware of their teammates’ personal experiences to create a stronger community.

Athletic director Jim Phillips said maintaining such an environment is a priority of the athletic department.

Felicia Gowanlock, an academic adviser in the athletic department, was sitting in the circle of chairs when White came to his first Engage meeting. As White’s adviser, she said she has watched him grow as a student, athlete and person.

“I have seen him, within the past year, and even the last couple months, just fully develop who he is, and (be) 10 times more comfortable or confident with who he is,” Gowanlock said. “He’s just one of the most remarkable people I’ve ever met.”

White’s enhanced confidence translated to on-field play this season. The junior finished with 55 saves and two shutouts in 10 games, and tallied a career-high 10 saves in a 3-0 loss to Maryland in September.

After splitting time in the net with senior Francisco Tomasino and freshman Miha Miskovic, White will compete for the starting job next fall as the Wildcats look to make another push in the Big Ten.

His newfound confidence has carried over off the field as well, White said. A communication studies major, White spent the summer interning at a marketing startup in Miami, and returned home for a weekend in June to attend the annual Chicago Pride parade for the first time.

White said he hopes stories like his can help others in similar situations at different universities. University President Morton Schapiro told The Daily the positive response to White’s story “should be expected.”

“I’m looking forward to the day when it’s not a story, that people are accepted for announcing who they are,” Schapiro said. “But alas, it’s still a story, particularly in big-time athletics.”

Despite Schapiro’s hopes, the story of a Division I athlete publicly coming out during his college career remains a significant milestone. White said his experiences throughout the past few months have been freeing and positive, and that he’s telling his own story so others can, too.

“You don’t have to do a public thing like me, but just being yourself is what you need to be able to do,” White said. “If I can help one person, that’s all that matters.”