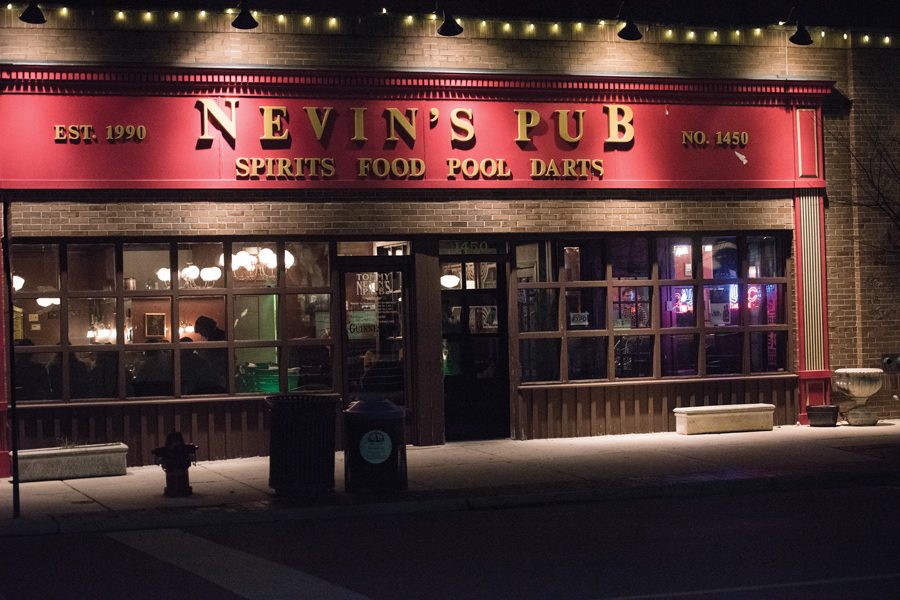 Tommy Nevin’s Pub, 1454 Sherman Ave, which was a popular bar for students. Evanston and University police are investigating students who stole items from the pub last month.

Northwestern students flooded Tommy Nevin’s Pub on Thursday, hoping to soak in one last night at the popular bar before it closes in late November.

The line outside the bar, located at 1454 Sherman Ave., stretched down the sidewalk for much of the evening as students eagerly awaited what they referred to as “the last Nevin’s.”

“I’m expecting sweaty, sweaty crowds,” Communication senior Devyn Johnson said as she waited to enter shortly before midnight. “Probably being stuck in one corner all night. And decent, cheap beer.”

Justin Deffenbacher, a Medill senior waiting in the queue minutes before Johnson, said he came to “pay homage to a spot that so many Wildcats have spent a lot of time at.”

But a night of revelry ended on a sour note, with the bar closing earlier than many expected as students attempted — some successfully — to take a part of the watering hole home with them.

In a Letter to the Editor published in The Daily, bar manager Brian Davenport said Nevin’s walls were rendered bare at the end of the night, with dart boards, photographs and mementos stolen.

He told The Daily on Sunday that some property was returned, including a dart board and a neon Guinness sign, but that much remained lost. Davenport, who has worked at Nevin’s for six years, said the bar expected a heavy turnout Thursday but frequently fills up without incident.

“I’m disappointed more than anything else,” Davenport said. “The guests were only Northwestern students. This is not an experience that we’ve had with the other communities that we serve.”

Davenport said he expects the bar will continue to have busy nights, including the Wednesday before Thanksgiving when he said the place is traditionally filled with college students who grew up in Evanston and are home from school. He said after Nevin’s closes on Nov. 30, the bar will auction off decorations.

By any standard, Thursday was particularly packed at Nevin’s. Weinberg senior Daniel Sanders said the tight quarters drove him to leave after three minutes.

Regarding students who stole items, some of whom he said he knew, Sanders said he imagined it became the “thing to do” and that “people didn’t stop to think, ‘Hey, maybe we shouldn’t steal stuff.’”

Megan Lubow, another Weinberg senior, said she saw on Snapchat the next morning that her friends had taken souvenirs. Lubow added that even though she didn’t take anything herself, reading Davenport’s letter in The Daily made her feel “pretty bad.”

Davenport said most of the attempted thefts were prevented before students could leave, but he was most saddened that students took mementos that can’t be replaced, including a picture of the three original managers of the bar.

“This is a cherished piece of the Evanston community,” Davenport said, “and so for undergraduates — most of whom were not born when those pictures were hung — to come in and take it because they think it’s funny, it hurts.”