Football: Wildcats embrace the muck in sloppy win over Minnesota 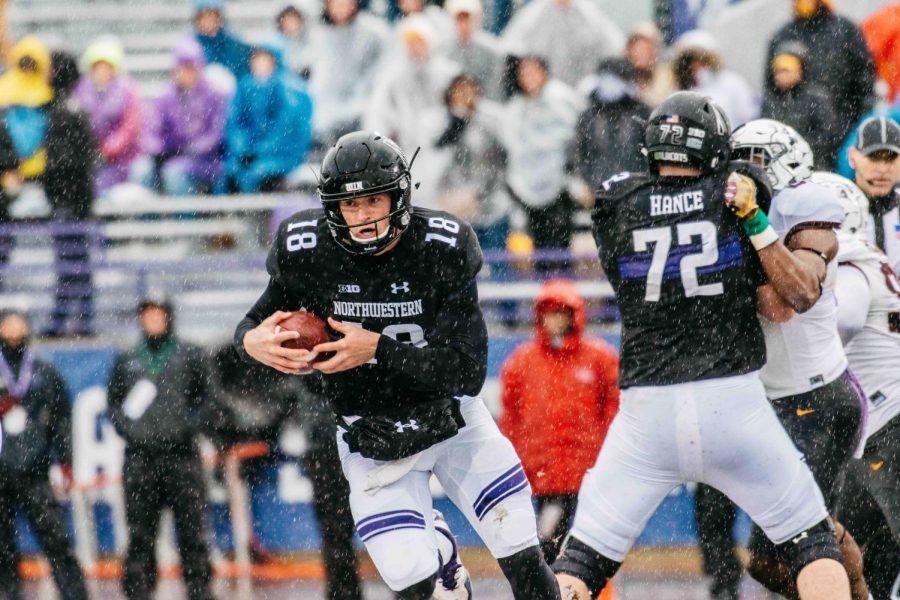 Nature seemed intent on making Northwestern’s Senior Day one to remember. Ryan Field saw heavy sheets of rain before kickoff, and the cold and soggy weather continued throughout most of the game.

The No. 23 Wildcats (8-3, 6-2 Big Ten) didn’t seem bothered by the elements, taking care of business against Minnesota (5-6, 2-6) easily in a 39-0 rout. But if the game had taken place earlier in the week, when NU practiced in similar conditions, coach Pat Fitzgerald said the final score could’ve been even more one-sided.

“If we could’ve played Wednesday, we would’ve put 80 on the board,” Fitzgerald said. “It was like a bunch of 8-year-olds out jumping in puddles at a youth football practice. Their attitude was phenomenal.”

When the real game came around, Fitzgerald said his Cats “embraced the suck” on a day when many NU fans stayed home. The sparse crowd that stuck with the game was treated to a dominant performance by a home squad unfazed by the conditions.

Forced to the ground, the Cats’ offense played a crisp game, running all over the Golden Gophers without a turnover. NU finished with 53 carries compared to just 15 dropbacks, but it didn’t stop the hosts from racking up 277 rushing yards and their highest regulation point total of the Big Ten season.

On the other side, the weather completely neutralized Minnesota’s passing attack, with quarterback Demry Croft completing just two passes and tossing three interceptions. The Cats added two fumble recoveries for good measure to set up the offense while dodging missteps on the soaked field that could’ve led to big opposing gains.

Fitzgerald said he was pleased with the way his team executed in the face of the difficult elements. NU evaded weather-related mishaps in the kicking game, avoided drops with the wet ball and completed the exchange between senior center Brad North and junior quarterback Clayton Thorson all day without issue. Against an overmatched Golden Gophers team, the conditions could’ve been an equalizer. Instead, the Cats rode their mistake-free performance to a resounding victory.

That’s not to say NU’s players didn’t notice the powerful gusts and the potpourri of precipitation it carried with it — Igwebuike said it was the coldest game he’d played in years. But rather than shy away from the wind and rain, the Cats drew from them to close out the 2017 home slate on a high note.

“Not a whole lot of people here. I understand. It’s cold and rainy,” senior running back Justin Jackson said. “But we just went out there and we made our own energy, and we had fun.”