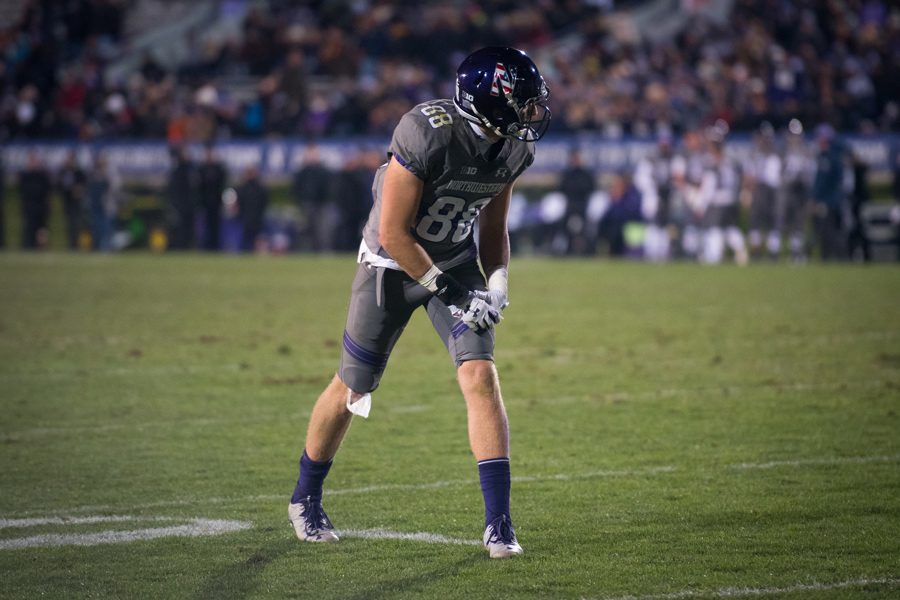 Ben Skowronek lines up for a play. The sophomore receiver has emerged as Northwestern’s top threat on the outside this season.

Thorson wasn’t kidding. Not only had the duo grown close on the field, working together four to five days a week this spring and summer, but just weeks earlier — having lost his room key after former teammate Austin Carr’s wedding — Thorson slept on Skowronek’s mattress.

Four months later, Thorson and Skowronek were 11 yards apart but still in sync, this time on a jump ball in the back corner of the end zone that gave the Wildcats a 14-0 halftime lead over Purdue last Saturday at Ryan Field.

“When the ball goes up in the air, I’m pretty confident he’s going to come down with it or get a call,” the junior quarterback said afterward. “It’s nice to have a guy like that. We haven’t had someone like that in a while.”

The receiving touchdown was Skowronek’s team-leading fourth of the season. His seven catches for 117 yards against the Boilermakers put him more than 100 receiving yards clear of fellow receiver Flynn Nagel for the lead in that category, too.

The 6-foot-4, 218-pound sophomore credited his tight relationship with his quarterback for his success.

“When the ball’s in the air, you have to have the confidence you’re going to catch it,” Skowronek said. “(And) when the quarterback trusts you as a receiver, you have a lot of confidence in your game.”

As a freshman last season, Skowronek was one of a few players the coaching staff selected in a preseason meeting to play immediately, receivers coach Dennis Springer said.

The Fort Wayne, Indiana, native — a hometown he shares with Springer, who said the connection helped him initially recruit Skowronek — didn’t tear up any box scores, finishing the 2016 season with just eight catches for 70 yards and struggling with drops. But the experience nonetheless made an impact.

“Last year, towards the end of the season, the games started to slow down a little bit for me,” Skowronek said. “I didn’t have the production I wanted to have as a freshman, but there was a lot of learning that took place … It also exposed my weaknesses, and I realized this offseason what I had to do to get better.”

That weakness was in the strength department, and so Skowronek said he went to work on bulking up. He added eight more pounds to his frame and, in the words of Springer, learned how to “create some space for himself, and not necessarily with speed.”

That offseason effort paid off with an eight-catch, 123-yard eruption in the opener against Nevada, then his first two career touchdowns two weeks later against Bowling Green. Skowronek’s box score numbers then fell off somewhat, but the week-to-week reliability remained, coach Pat Fitzgerald said.

The numbers finally came back last weekend, including the touchdown connection that Skowronek said he and Thorson had stayed after practice to perfect just a few days before. The receiver was far from open — Purdue cornerback Josh Okonye was, in fact, all over him — but Skowronek’s ability to high-point the ball led to a score anyway.

It’s that kind of vertical ability that has made, and will continue to make, Skowronek a critical aspect of the Cats’ offense, Springer said.

“He’s got an aggressive nature, and you have to in order to win those 50-50 balls,” Springer said. “That relationship with he and Clayton, knowing where the ball is, where to expect it and the timing of it all goes into that (skill) as well.”