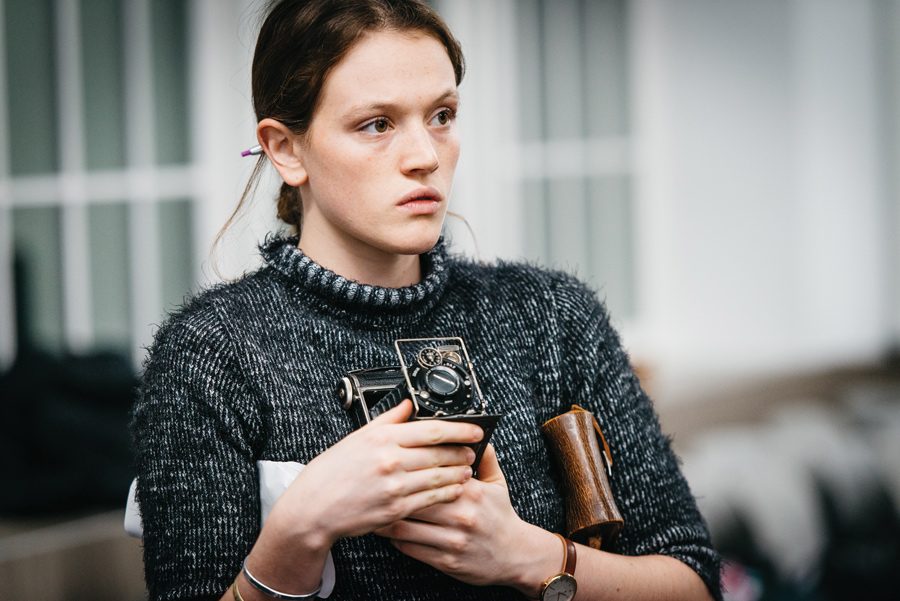 Communication freshman Delia Cunningham rehearses for the upcoming production of “FAIR GAME: A Chicago Spectacle.” Cunningham portrays a fictional photographer who serves as the narrative thread in the shows.

Audiences who come to Sit and Spin Productions’ fall show will choose their own adventure. Entering one room will immerse them into the story of an architect creating the greatest spectacle Chicago has seen. But turn the corner, and another room reveals a clever, disturbing murder mystery.

“FAIR GAME: A Chicago Spectacle” — set during the 1893 World’s Fair in Chicago — will make the entirety of Cahn Auditorium “fair game” for the audience to explore, co-producer Gracie Brakeman said.

“We really want people to poke around (because) that’s one of the most fun things about immersive theater. … You can poke around wherever you want and be a little bit nosy,” said Brakeman, a Communication junior.

In “Fair Game,” the audience is free to move through different rooms in Cahn and watch various scenes unfold. The scenes develop several different story arcs, all related to some aspect of the fair. The production opens Nov. 30 and runs through Dec. 2.

Shows produced in the late-fall Cahn slot are usually “risky” and use the space in an innovative way, co-producer Austin Manross said. In the case of “Fair Game,” this means audience members are free to view scenes in any order they wish, and may leave the theater with different impressions of the show.

Communication freshman Delia Cunningham portrays a fictional photographer who serves as the narrative thread in the performances through the snapshots she takes of the various scenes. Cunningham said immersive theater engages audience members in a unique way by putting them in an active role within a story.

“It shows how powerful fiction is and how powerful stories are that someone can leave and think of themselves as being complicit (with the actions),” she said. “You’re not even an actor; you’re not in the world (of the show), but you will be forced into the world.”

Writer and director Eli Newell said the universe he created in the play was inspired by the book “The Devil in the White City,” which tells the story of fair architect Daniel Burnham and a serial killer who terrorized the fair, H.H. Holmes.

During a summer spent researching periodicals and newspaper clippings in Deering Library, Newell wrote a script that features not only the fair’s major players, but also several figures who have been forgotten by history, he said. The play also contains two original, fictionalized characters, including Cunningham’s role.

Newell earned the Cahn slot before writing the play, so the pressure to create an immersive, original piece was in the back of his mind during the entire writing process, he said.

“I (was) very cognizant of what stories have to be environmental, interactive, immersive stories and what stories would function totally fine in a proscenium setting with an audience just sitting in chairs and watching them unfold,” he said.

Communication freshman Jake Anderson, one of the performers, said the rehearsal process would look “chaotic” to an outside observer because the actors rehearse different scenes simultaneously in the same classroom.

However, Cunningham said the actual performances will feel very different due to the element of audience immersion.

“The missing link everyday in rehearsal is the audience,” Cunningham said. “They are truly the final character in the show.”

Extensive research went into the production, as dramaturg Maddie Rostami — whose job focused on contextual research of the play — created a website and compiled documents about the time period for the cast to read, Cunningham said. Rostami also spoke to the team about the period etiquette for men and women, she said.

Cunningham said knowing details about the social norms of the time, such as the fact that men would often kiss a woman’s hand rather than shaking it, impacted the way she approached her character. This knowledge made her especially cognizant of her character’s rebellious decision to shake men’s hands.

“One of the really interesting themes that gets discussed in the play is what it is to be a woman in a man’s world,” she said. “I would say that’s really something that’s coming to life for me right now is just how ingrained in our structure, in these structures, in these buildings, misogyny is.”

The concept of structures has a major place within the show, as one of the main storylines is heavily tied to architecture. However, the play not only focuses on the literal construction of the fair, but also on the metaphorical creation of fake worlds, Cunningham said.