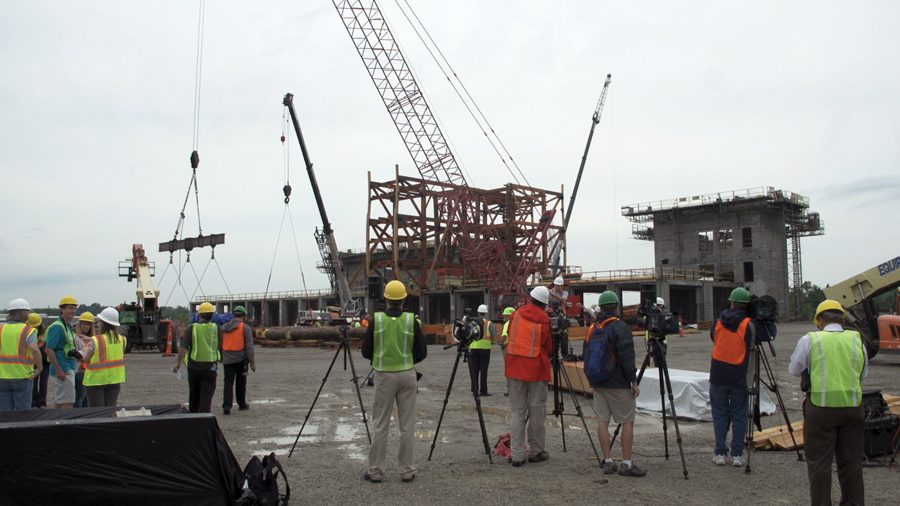 “We Believe in Dinosaurs” follows the creation of Ark Encounter, a life-size construction of Noah’s Ark. Communication lecturer Clayton Brown, co-director of the film, said the documentary explores the complex conflict between science and religion in America.

When the flood came, Noah loaded his animals into the ark, the biblical tale goes. There were cattle and lions, birds and fish and, according to creationists, dinosaurs.

“We Believe in Dinosaurs” follows the creation of Ark Encounter — a life-size construction of Noah’s Ark — by the Creation Museum in Kentucky over the course of three years, from initial concepts to opening day. The film is told through the eyes of three different people: an artist working on animal sculptures for the exhibit, a geologist who opposes creationism and a former creationist.

Communication lecturer Clayton Brown, co-director of the film, said the documentary explores the complex conflict between science and religion in America.

The project is the latest by 137 Films, a documentary production company started by Brown and Monica Ross (Communication ’03) in 2004. The Chicago-based nonprofit aims to create science films rooted in storytelling, breaking from the traditional archetype of a “science documentary.”

“You would normally think of a science documentary like an educational documentary where scientists point at and explain things,” Brown said. “We wanted to make documentaries about stories in the world of science and what the scientists are doing so they become characters in a story rather than just sources of information.”

Ross said she and Brown came up with the idea for “We Believe in Dinosaurs” while working on a previous documentary that dealt with “an alternate facts universe.”

While working on that film, the two heard about Kitzmiller v. Dover Area School District, a court case in which a group of parents and teachers sued the Pennsylvania district after teachers were required to discuss intelligent design as an alternative explanation to evolution.

“Clayton and I noted to each other that (creationism) was another world of alternative facts and another world of culture and science clashing,” said Ross, the other co-director of the film. “It really became one of the major divides in this country, of science versus belief.”

Ross and Brown, alongside producer Amy Ellison, set out to create the film in 2013 — the start of a more than four-year process involving extensive research on creationism and its roots, comprehensive interviews with various subjects and a couple dozen six-hour road trips to Kentucky to shoot footage and track the progress of Ark Encounter, Brown said.

Brown said raising money for the film has been “constantly a struggle,” and that the documentary is mostly a result of unpaid work. While the team raised over $120,000 — mostly through an Indiegogo campaign — the “real professional budget” is estimated to be about $350,000, Brown said.

Ross said the team entered the project wanting to listen to the creationist perspective rather than framing a certain narrative as right or wrong. The film, she said, will hopefully shine a light on a group of individuals who are often misunderstood or not taken completely seriously.

“We went on a journey into that world to find out, not mocking, not making fun of anyone, really looking seriously and telling them, ‘Please tell us what do you believe, what is creation science and why do you believe this?’” Ross said.

The documentary is unlike any of 137 Films’ past productions, Brown said, because it explores an “extremely personal” way of understanding the world.

Brown added that he was surprised to learn how widespread creationism beliefs are, citing a 2014 Gallup poll that found over 42 percent of Americans believe God created humans in their present form 10,000 years ago.

Brown said he didn’t know what to expect when meeting creationists, but he was surprised with how easily he connected with them.

“When there’s someone who believes something so different than you, it’s easy to assume that you’ll have nothing in common,” Brown said. “That’s going to be a surprise to a lot of people who see the film… (that) creationists are, for the most part, just normal people who happen to believe something very strange.”

David MacMillan, one of the subjects of the film, said he grew up as a “strident and committed” creationist before reconsidering these beliefs after studying science in college.

Now a writer who frequently discusses his experiences as a former creationist and blogs about his views, MacMillan said he hopes the film gives people a better understanding of the belief and helps them better respond to creationists and their claims.

“This is just an absolutely unprecedented time in terms of the number of areas in which science and reason are being challenged and replaced with ideology and fear,” MacMillan said. “It’s definitely a really, really good opportunity to explore these kinds of issues.”

Currently, the film is in its final stages of editing, Brown said, and will be finalized between now and January.

After the film is completed, he said the team hopes to enter festivals and show the film to as many audiences as possible. Specifically, he said, he hopes to do a tour in southern states — specifically Kentucky — to raise discussions about creationism in schools and churches where the subject matter resonates most.

“In some ways we hope to open this door so that people can see into this other bubble, (but) we’d also like to … hold up a mirror maybe or show them that their world view isn’t the only world view,” he said. “We’d like to open up both of those types of dialogues.”

While the documentary centers on the conflict between science and religion, Brown said the film is also about how the U.S. has grown more and more divided.

In the current political climate, it is more important now than ever to listen and learn from one another, he said.

“We watch our own news stories, we listen to our own facts, we listen to people that are like us,” Brown said. “What we wanted to do with this film was open a door into another bubble and start some dialogue … about why different ideology works, why do people believe this.”