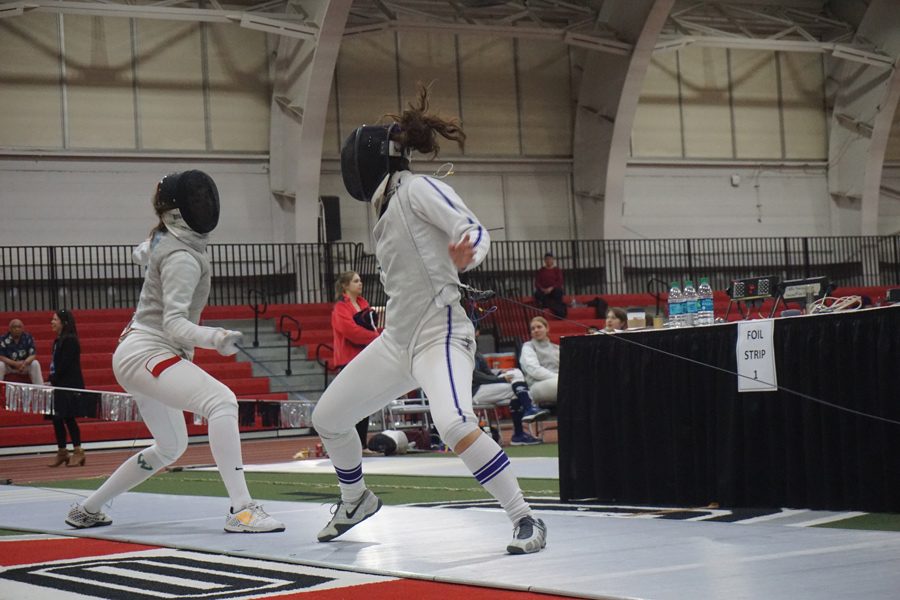 A Northwestern fencer dodges an attack. The Wildcats finished 8-0 at the Vassar Invitational last weekend.

Northwestern went into the Vassar Invitational with a clear goal: an 8-0 weekend sweep.

With only one bout coming down to the final few points, the Wildcats (13-3) achieved that goal.

“The team fought hard, ground out win after win after win, which isn’t easy,” coach Zach Moss said. “The team did a really good job handling that pressure and responding to it and going out and taking care of business.”

Facing off against eight northeast teams in an eight-hour span, NU finished with 171 individual wins while suffering only 45 losses.

Sacred Heart was the only team to put a scare into the Cats all weekend. Behind an 8-1 record from their epee squad, the Pioneers almost pulled off an upset. But NU came back to win 14-13.

“It was a good challenge for our team to run into something that was more challenging than expected, and they responded to that really well,” Moss said. “The match was close but they fought hard. They pushed each other. They made sure we came away with the ‘W.’”

Besides Sacred Heart, no other team came close to defeating the Cats. NU matched or exceeded 20 individual wins in its seven other matches. After struggling against the Pioneers, the epee team went 9-0 in its final three matches against Stevens, Queens and Wagner. The Cats concluded the tournament with their best performance, routing Wagner by a score of 26-1.

Of 18 Cats who fenced in the tournament, only two did not finish with winning records. For the sabre squad, freshman Ashley Gomerman led the team with an immaculate 14-0 record. Combined with her results at the Elite Invitational, Gomerman has yet to lose a bout during her first two collegiate tournaments.

“The most impressive result was Ashley going 14-0,” Moss said. “That is not easy do against any opponents, especially as a freshman.”

Van Riper said she was pleased with the team’s focus during the eight-hour tournament in Poughkeepsie.

“Having two collegiate meets back-to-back can be very taxing physically, emotionally,” Van Riper said. “Everyone came into this weekend with an incredible amount of energy and stayed focused the whole day even though we were there for eight hours.”

After the tournament, NU had a postgame meeting and discussed how the team worked to support each other throughout the day. Gomerman said that discussion was a “great way to build the team” and hopes to make it a tradition.

The Cats now have almost two months before they return to the strip Jan. 5 in Virginia Beach for the January North American Cup.

With two collegiate competitions out of the way, Moss said the team is well on its way to future success.

“We are in a really good place,” Moss said. “There is work to be done, but the team is coming together faster than I expected. I am excited to see what the next few months bring.”