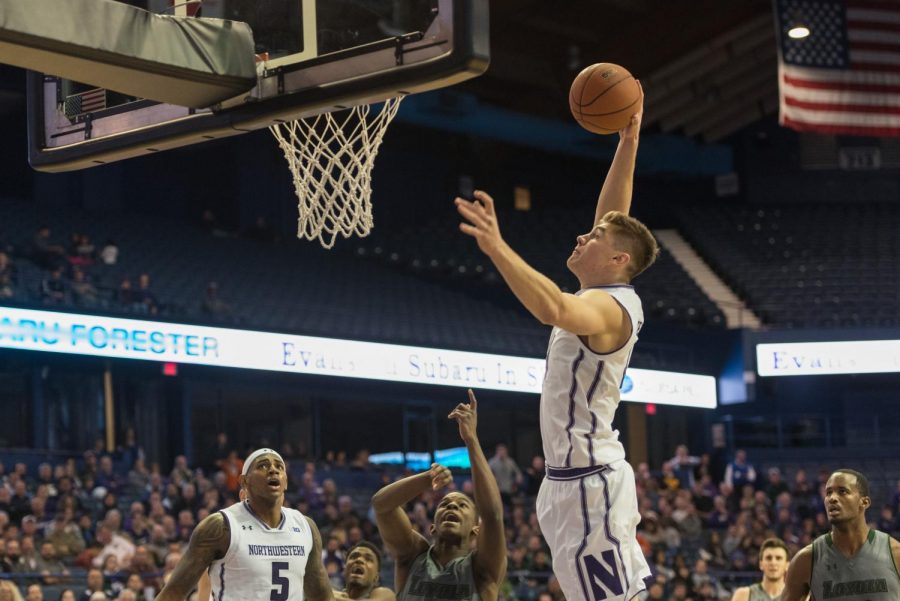 Gavin Skelly skies for a dunk. The senior forward had 14 points and six rebounds to help the Wildcats hold off St. Peter's on Monday.

ROSEMONT — After a too-close-for-comfort victory over Loyola Maryland in its season opener, Northwestern took care of business in a 75-66 win Monday against St. Peter’s.

The No. 20 Wildcats (2-0) forced a shot clock violation on their first defensive possession, and things did not get much better for the Peacocks offense from there. NU held the visitors to 38 percent shooting from the field in the first half.

That defensive effort was spearheaded by the experienced starting five, which allowed only 3 points while sharing the court for almost 10 minutes in the period.

“We’ve had two games in a row now where we’ve given up in the 20s in the first half defensively and in the 40s in the second half,” coach Chris Collins said. “In the first half, your defense is in front of the coaches, and the coaches are able to communicate and help guys through actions and screens.”

St. Peter’s (0-2) was forced into a number of contested 3-pointers throughout the game, but the Peacocks still managed to finish the game 10-for-26 from deep.

On the offensive end, senior guard Bryant McIntosh led the way with 17 points. McIntosh was efficient on the day, finishing 5-for-9 from the field and 6-for-6 at the foul line.

Overall, however, the Cats had a balanced scoring effort. All five starters chipped in at least 10 points, including senior forward Gavin Skelly, senior guard Scottie Lindsey, junior forward Vic Law and junior center Dererk Pardon. The veterans shined at the line, shooting 23-of-24 from the free throw stripe on the day.

“I came out looking more aggressive offensively,” Skelly said. “I told my team I would be better today than I was last game … and once I kind of made a couple baskets, everything kind of opened up for me.”

After an uneven first half that saw NU turn the ball over nine times yet still lead by 7 points at the break, the Cats emerged from the break on fire. The hosts pulled ahead on a barrage of 3-pointers from Skelly, Lindsey and Law and eventually opened up a 16-point lead almost eight minutes into the period.

Those shots, however, were outliers for the Cats, who took only 16 of their 47 shots from behind the arc and made six of those attempts.

“We got a couple wide open threes,” McIntosh said. “Gavin started it off with one of our special plays, and he was able to knock that down, so that gave us a lot of confidence after seeing that first one go down.”

That lead looked more tenuous later in the half, as St. Peter’s cut NU’s advantage down to nine with five minutes remaining. Those efforts largely came at the foul line. After not taking a free throw in the entire first half, the Peacocks made 12 of their 15 free throws in the second half.

The Cats once again struggled to get significant contributions from the bench, which scored only seven points, but the other 68 from the starters were enough to secure the victory.

“I want them to be confident. I want them to come in and feel like our level of play can stay the same,” Collins said. “There’s no question we’ve got to get better production out of the bench, and we as coaches, I have to do a better job getting lineups out there that can be effective when we’re resting our starters.”