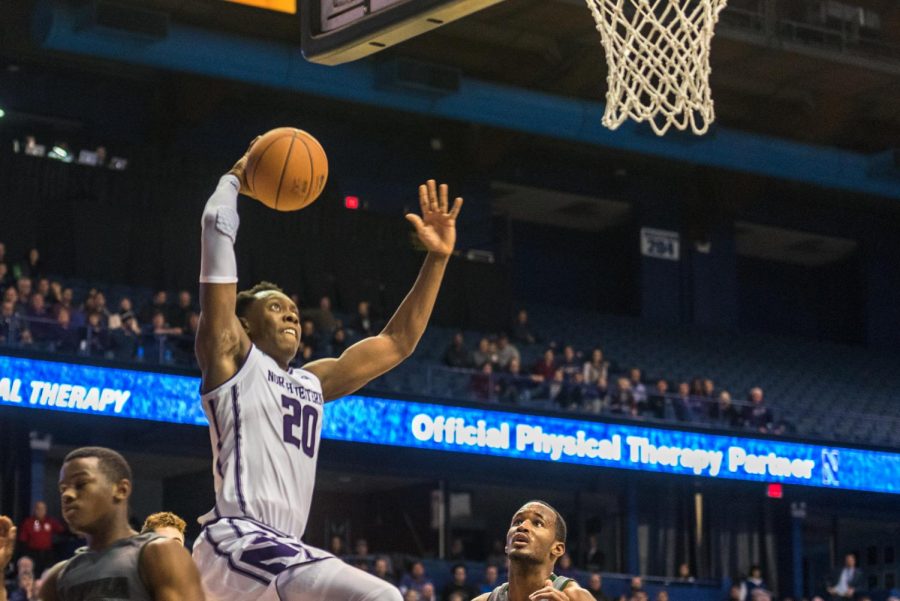 Scottie Lindsey rises for a dunk. The senior guard led all scorers with 26 points as the Wildcats survived Loyola Maryland on Friday.

ROSEMONT — Northwestern’s game against Loyola Maryland on Friday was likely the most anticipated season-opener in program history, a consequence of the Wildcats’ No. 19 ranking and first-ever NCAA Tournament appearance last season. Fans were given mini-towels commemorating the historic event, and there was a palpable buzz in Allstate Arena.

The Cats (1-0) made barely enough plays in crunch time, aided by a pair of Bryant McIntosh free throws and three empty Greyhounds (0-1) possessions in the final minute, to sneak out a 79-75 victory despite making no field goals in the last two minutes.

“We feel very fortunate to win the game. We had a lot of game pressure on us late,” coach Chris Collins said. “We’re happy we won.”

Junior center Dererk Pardon slammed home a dunk with 2:13 remaining to put NU up 74-68, seemingly giving the Cats enough breathing room to secure the victory. But two Loyola jumpers — one a 3-pointer — gave the Greyhounds the ball down 2, with a minute to play.

Then, after a series of turnovers and made free throws, senior guard Scottie Lindsey had an opportunity to secure the win at the free throw line with NU leading 77-75. He missed both, however, and only after another Loyola turnover and the ensuing McIntosh free throws could the Cats breathe a massive sigh of relief.

“We weren’t able to put our foot on the throat. That’s really frustrating,” Lindsey said. “That’s something we got to work on, is keeping our foot on the gas pedal and finishing games off.”

After taking command with a 16-0 run early in the first half and building a 17-point advantage in the first few minutes of the second, NU seemed well on its way to the easy victory most expected. Lindsey scored 14 points before the break, capped by a highlight-reel dunk seconds before the buzzer. He finished with 26 to lead all scorers despite returning to the locker room briefly in the first half with a balky ankle.

Three other Cats joined Lindsey in double figures — both McIntosh, a senior guard, and Pardon had 16 points — but NU made a woeful 5-of-21 3-pointers and missed 13 free throws.

Those offensive struggles kept the Cats from pulling away in the second half; NU led by no more than 6 after the Greyhounds had tied the game.

The win was uncomfortable in many ways. NU was plagued by severe foul trouble; all three of the Cats’ big men had four fouls midway through the second half, and the wings were not far behind. McIntosh said NU played without much energy, and the game was the Cats’ first at their home-away-from-home this season, nearly 15 miles from Evanston.

So while it was a win, it was a performance NU doesn’t hope to repeat Monday against St. Peter’s — a team that was picked by coaches to finish eighth in the MAAC and thus, in theory, shouldn’t pose much of a challenge to the Cats.

“It’s frustrating. We were up 17 and just never finished it,” McIntosh said. “Thankfully we’re able to walk out of here with a win, but certainly a lot we can learn from.”