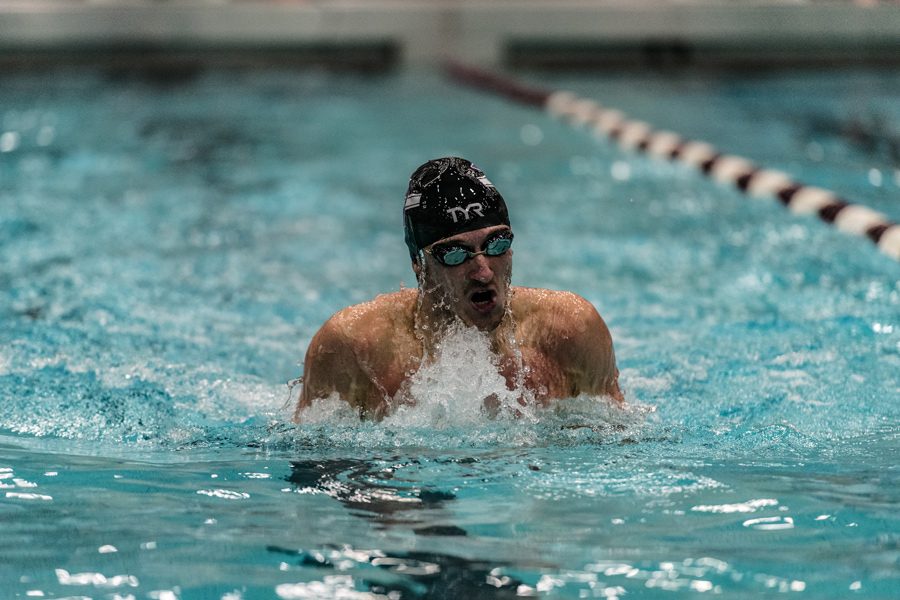 A Northwestern swimmer races. The Wildcats will take on Wisconsin on Saturday.

Northwestern has picked up three wins in the last two weeks against weaker opponents, but has struggled against stronger teams from power conferences.

The Wildcats (3-5) have an opportunity to change that Saturday in their Big Ten opener against Wisconsin. The Badgers (1-6) have already faced five ranked teams in No. 10 Auburn, No. 15 Tennessee, No. 12 Georgia, No. 5 North Carolina State and No. 4 Michigan.

Wisconsin will compete on the road for the second consecutive day. The Badgers swim at Green Bay on Friday before heading to Evanston. Still, the Cats are expecting a challenge from their Madison rivals.

“Wisconsin is a really strong team,” freshman Lyon Zhang said. “If we can just swim our best and hold up against them, I think that will be a success for us.”

Zhang has been a bright spot for NU recently, finishing fourth out of 17 swimmers in the 200-yard breaststroke last weekend at the SIU Invite against Missouri, Kentucky and Southern Illinois. His improvement is another encouraging sign for the team, which has benefited from its large freshman class.

For one of those freshmen, Saturday’s meet has a special significance. Peter Lewczyk was recruited by Wisconsin out of St. Ignatius in San Francisco, but chose NU due to its academic reputation and accepting team.

“(Wisconsin is) a Big Ten rival, so that’s always fun and a lot of the guys are excited for that,” Lewczyk said. “The fact that I know them makes it all the more exciting.”

For that to change Saturday, the Cats will need to reach their full potential, which freshman Keegan Bundy said hasn’t happened yet.

“We just need to get each other excited,” Bundy said. “We’re racing another Big Ten team, so I think that will do it. We’re just going to keep training hard, and eventually we’ll get there.”

The Cats are also looking forward to the return of junior Ben Magliato, NU’s lone diver. Magliato has missed the entire season so far due to a concussion, but Lewczyk said he has been practicing this week. It is unclear whether Magliato will compete against Wisconsin, but his return would boost the Cats’ morale and scoring.

Last weekend, NU had a six-hour bus ride downstate for a two-day meet. The environment Saturday will be much more controlled. The Cats will face just one opponent for one day at their home pool, and are finding motivation from recent defeats.

“It’s always good to get wins, but even the losses that we’ve had are also motivational,” Lewczyk said. “We match up better against Wisconsin than we did against Kentucky and Missouri last week. There’s a good opportunity to get some first-place swims.”