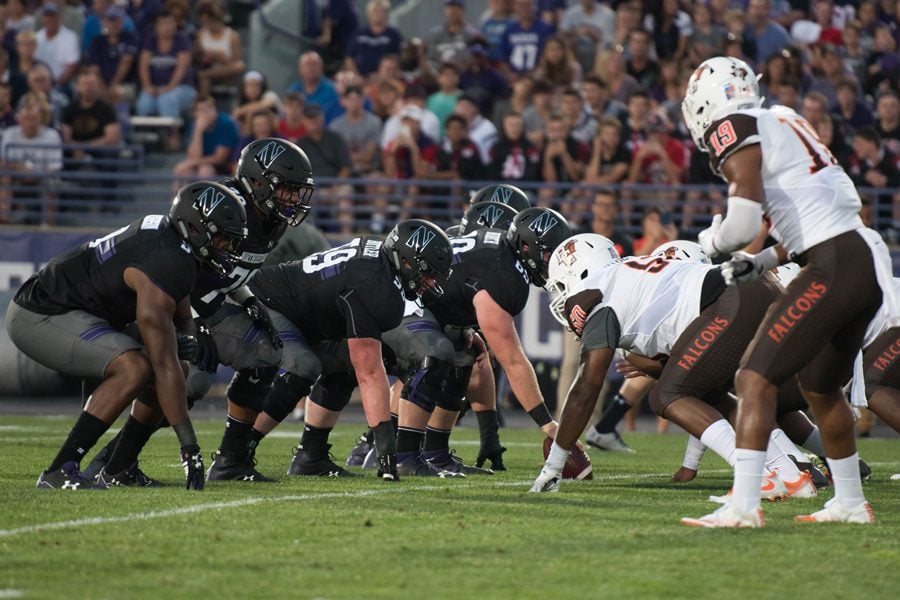 Northwestern's offensive front lines up. The team has seen improved play from its offensive line over the course of this season.

After a rocky early-October stretch, in which Northwestern conceded eight sacks to Wisconsin and didn’t score until late in the fourth quarter against Penn State, the Wildcats’ offensive line didn’t get a pep talk or take a “magic pill,” junior guard Tommy Doles said.

Instead, it simply started playing better.

In the team’s last four games, No. 25 NU (6-3, 4-2 Big Ten) has allowed just five sacks and put up two of its best rushing performances of the season, statistics demonstrating improved line play that parallels the Cats’ four consecutive wins.

“It’s a product of our work in the offseason, training camp, the work that we put in throughout the season,” Doles said. “It’s things starting to come together, getting our timing together, getting on the same page, (and) making our calls.”

Saturday’s win at Nebraska, a 31-24 triumph that marked the Cats’ third consecutive overtime victory, may have been the best recent performance for the line. NU averaged 5.2 yards per carry, scored all four of its touchdowns on the ground and did not allow a sack for the first time this season.

The line’s play was on full display during one of the game’s most important plays: junior quarterback Clayton Thorson’s touchdown sneak on fourth-and-goal in overtime. Behind a strong push, Thorson secured the eventual game-winning score.

The improved performances also correlate to a more clearly defined set of starters. After using a complicated rotation that involved up to eight regular players, lately NU has stuck with the same five players.

Junior Blake Hance has regained the left tackle spot he lost in training camp, while junior J.B. Butler has filled the left guard role vacated by Hance. On the other side of the line, true freshman right tackle Rashawn Slater has separated himself from redshirt freshman Gunnar Vogel, who fell off the two-deep depth chart this week.

Beyond personnel, the line’s veterans said the unit has embraced a new mentality.

“We’ve challenged ourselves, we’ve set a precedent now that we need to … finish every block possible,” senior center Brad North said. “We just changed our attitude and our culture over the last few weeks, and obviously it’s shown good results.”

Defensive linemen have taken notice of the shift, too. Sophomore defensive end Joe Gaziano even had high praise for the scout team offensive line, against whom defensive players practice at this point in the season, and said weekday practices are more taxing than Saturday games.

The Cats’ competition in recent weeks could also be a factor in the line’s improved results. Nebraska and Maryland — against whom NU racked up 238 rushing yards — sit near the bottom of the Big Ten in rush defense, while Wisconsin and Penn State are two of the conference’s top three teams in sacks.

But the competition won’t stiffen down the stretch. The Cats’ final three regular season opponents are all among the worst at recording sacks in the Big Ten; this week’s opponent, Purdue, had just 10 in eight games before tallying five against conference bottom-feeder Illinois last week.

For a rejuvenated line, games like Saturday’s present an opportunity for more fun.

“We love doing our job,” Doles said. “If we can give Clayton some more time or open up some holes, that’s gratifying to us.”