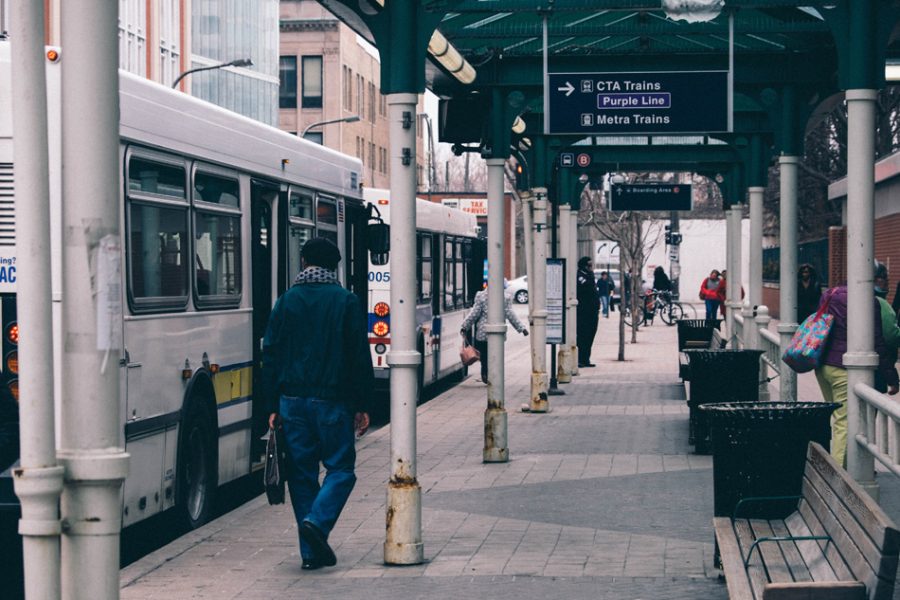 Buses wait at the Davis Street CTA station. The city proposed a program to improve bus stops and increase transit accessibility for seniors.

Evanston is looking to lower transportation barriers for the elderly by improving city bus stops as part of its proposal for the Bloomberg Philanthropies Mayors Challenge, a nationwide grant competition that encourages innovation in local government.

The competition, organized by Bloomberg Philanthropies, is currently in its fourth year. Evanston is one of hundreds of U.S. cities competing for grant funding.

According to Evanston’s grant proposal, the city believes easier access to transit would improve the quality of life and health for local seniors. The current plan emerged from a workshop, hosted by Bloomberg and attended by city officials, which was held in September.

Mayor Steve Hagerty said mobility is a major issue for older Evanston residents, and that the city is committed to helping them.

“It is important to us as a city, particularly as baby boomers age, that we want them to remain in Evanston and to have services that are acceptable to them,” Hagerty said.

Knapp said Evanston recognized the need for improved transit facilities in March, when a city study revealed that 23 percent of older residents experience barriers to transportation due to cost and inaccessible information.

Transportation barriers have a serious impact on seniors’ well-being, Knapp said. Many Evanston seniors exercise by walking to and from their local bus stops, Knapp said, and transportation access can also influence the mental health of the elderly.

“We heard from focus groups of older adults about items that are important health concerns,” Knapp said. “Of those, isolation is a big one.”

“Fixed-route transit provides an important backbone to transportation resources and other community centers,” Knapp said. “By supporting ridership and improving the conditions there at the stations we can benefit not only the individuals, but also the community.”

Hagerty said the new proposal ties in to recent city discussions about equity and empowerment.

In February, the city hired Patricia Efiom as its new equity and empowerment coordinator. Efiom presented a city-wide Equity and Empowerment Proposed Plan of Action in July, and city officials participated in their first equity training in October.

“We made a big effort towards equity and empowerment in the last year or two,” Hagerty said. “That means creating an equitable city across the board, and that includes age.”

If Evanston wins the first round of the Mayors Challenge this January, it will receive a $100,000 grant for a pilot program. After the initial pilot, Bloomberg Philanthropies will select five finalists, four of whom will receive $1 million. The top finalist will receive $5 million.

Knapp said regardless of the ultimate outcome, the workshop and development process itself are already helping the city grapple with important policy questions.

“This is a highly competitive program,” Knapp said. “While it would be great to get selected … the problem solving process (itself) is a huge asset that we will take forward as we look to solve other problems in our community.”