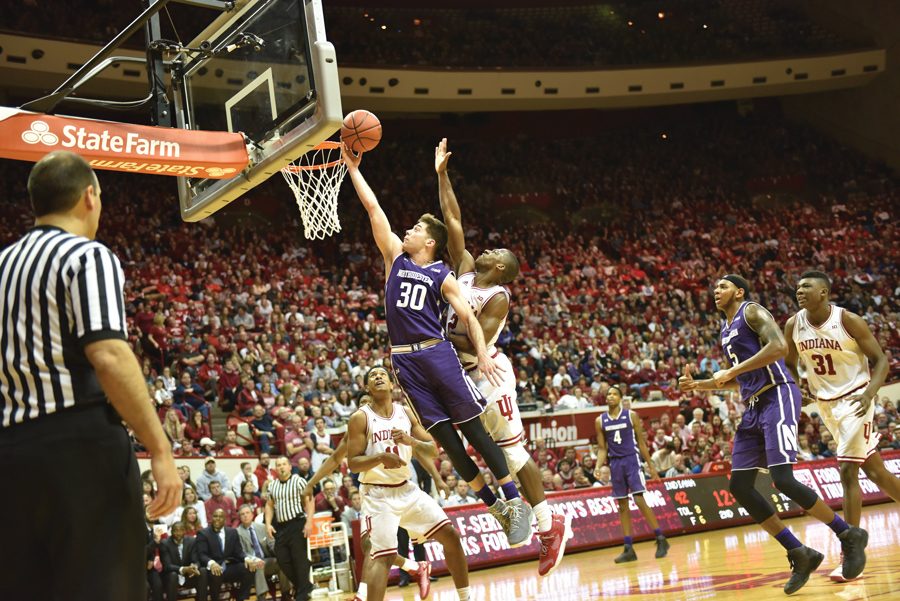 Bryant McIntosh lays the ball up. The senior guard is one of three seniors on Northwestern’s team this season.

When Northwestern takes the court Friday, it will do so without a familiar weight on its shoulders.

For the first time ever, the Wildcats will enter their new campaign on the heels of an NCAA Tournament appearance — an appearance 79 years in the making and the fruits of a historic journey that captivated a national audience.

But NU’s veterans aren’t celebrating; if anything, they’re preparing to shoulder an even bigger burden.

Now in the twilight of his time in Evanston, McIntosh has one final opportunity to define his legacy. The same goes for fellow seniors Scottie Lindsey and Gavin Skelly, whose careers saw the program enter a new era.

And though their names are already carved into the record books, the senior trio is ready to lead the Cats forward — wherever that may be.

“We can’t dwell on what we did last year,” Lindsey said. “We’ve got to try to do something bigger.”

It’s uncharted territory for NU, but the seniors are singing a familiar tune. When they joined the program, they devoted themselves to securing that first tournament bid. Every season built on the prior year’s foundation, and every accomplishment was merely a stepping stone to ending the drought.

What the next step includes, however, remains to be seen.

Ask McIntosh, and it features a banner hanging in the Welsh-Ryan Arena rafters.

“It’s my last year,” he said. “I want to win a championship. I come from a winning pedigree. In high school we won championships and that’s how I want to go out.”

It might seem strange, of course, for a team that went 78 years without an NCAA Tournament appearance to suddenly be contemplating a title run. But McIntosh isn’t one for moral victories. NU’s all-time assist leader has a checklist, and last season’s bid was only one component of it.

“Just making the tournament wasn’t winning a championship to me,” he said. “A championship is when you’re the last team standing and you get to cut down the net, celebrate as a team. You get a trophy, you get to hang a banner, you get championship rings. So I don’t think it’s out of the question or out of the realm of possibility.”

The Cats’ road to that title begins Friday against Loyola Maryland, and McIntosh, Lindsey and Skelly will be at the forefront of that charge.

In his second year as a captain, McIntosh’s role remains the same. Since his freshman year, the Greensburg, Indiana, native has been NU’s starting point guard, and in his final year, he’ll look to establish himself as one of the nation’s best.

His backcourt mate, however, enters his senior campaign as a household name for the first time in his career.

As McIntosh said, “America found out about Scott Lindsey” in 2016-17. Until he was sidelined toward the end of Big Ten play, Lindsey was the Cats’ leading scorer and best player as a junior. He was a consistent perimeter threat and dynamic finisher, and finally emerged as a defensive weapon for an NU team that made strides on that end of the floor.

Lindsey committed himself to a deeper tournament run, but the Cats will need him at his best from start to finish to emerge as a national contender.

“For us to be good, we need Scottie to be an all-league guy,” coach Chris Collins said. “I’ve just noticed, as a senior now, his maturity. He’s really embraced what it takes to be a guy that’s counted on, and we expect him to have a big season, and I know it’s something he’s hungry for as well.”

Skelly, meanwhile, will look to make strides in his final season after three years as a role player off the bench. As NU looks to maintain momentum from last year, it will need size and energy to replace graduated starting forward Sanjay Lumpkin.

Collins has yet to name the team’s fifth starter, but Skelly is among the names floating around to fill the void. And even if the 6-foot-8 Ohio native returns to his familiar spot on the bench, he’ll still be viewed as one of Lumpkin’s successors.

“Sanjay had some big shoes for me to fill,” Skelly said. “He’s a guy that’s solid, he’s consistent, he doesn’t make mistakes, he does everything the coaches ask him to do. I, on the other hand, I make a lot more mistakes. I take a lot more risks.”

But Skelly has proven himself in the past as an important rotation piece, and alongside Lindsey and McIntosh promises to provide leadership to a group swimming in unknown waters.

“I know we have lofty goals as a team,” Collins said. “A lot of veterans returning, we have really good leadership, a core group of guys that have been a part of winning and have tasted what winning is about.”

Much like his senior trio, the Cats’ coach isn’t going to get complacent with a tournament appearance. Though the elusive bid has dominated the narrative since Collins joined the fray in 2013, he said securing it was never his end goal.

He too wants a championship, whether that be in March, in Big Ten play or in November’s Hall of Fame Tip-Off.

The team may no longer have 78 years of futility driving it, but Collins and his veteran crew are dedicated to moving forward — even if the final destination is far less concrete. And for a group of seniors who have known nothing but uphill battles, the commitment to improvement remains unchanged.

“In my years, we’ve never had any expectations going into any season,” Lindsey said. “It was always ‘is it going to be this year?’ but not really knowing if we were going to make it or not. So it’s a little bit different, but we take it as a challenge.”