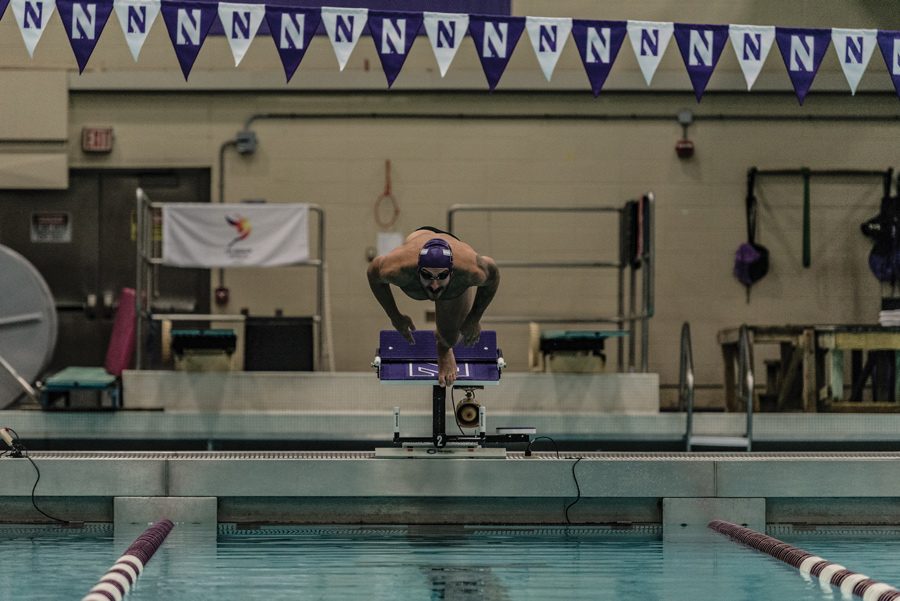 Nick Petersen dives into the pool. The senior and the Wildcats went 1-2 over the weekend.

The Wildcats (3-5) did not have a single first- or second-place finish when they competed against each of the three teams simultaneously at the two-day SIU Invite in Carbondale. Their best finish was third place in the 200-yard freestyle relay by senior Almog Olshtein, junior Will Hofstadter, freshman Keegan Bundy and junior Ryan Tate, who collectively completed the relay in 1:24.37.

“We’ve definitely had better meets,” Tate said, “but it was fun racing and especially pulling out a win over SIU.”

After competing at home the last two weekends, the Cats traveled nearly six hours by bus to Carbondale, a trip that can be taxing on the team both mentally and physically, Hofstadter said.

“It’s always difficult,” he said. “We got in the night before, so that made it better than it had been for other meets.”

The relays have been an area of relative strength for NU so far this season, and the Cats’ teams found themselves in the middle of the pack in several races Friday and Saturday. In addition to NU’s third-place finish in the 200 free relay, the 400-yard medley relay team of junior Jack Thorne, Hofstadter, Tate and freshman Peter Lewczyk took fifth with a time of 3:23.61.

The Cats also took fifth in the 400 free relay, with Tate, Lewczyk, Bundy and Olshtein finishing in 3:06.93.

The team swam on consecutive days for the second time this season, which Zhang said is good preparation for the annual TYR Invitational, a meet NU will host Nov. 17 to 19.

“We have our big meet coming up in two weeks,” Zhang said. “It was more than a one-day meet, so this was good training for it.”

Though Missouri (3-1) and Kentucky (4-2) dominated the Cats in just about every event, NU overwhelmed Southern Illinois (3-4) to nearly the same extent. In 13 of the 17 events in which the Cats competed, their top swimmer or relay team finished before the Salukis’ top finisher.

With just two home meets remaining in the fall season, NU is nearly finished with the busiest stretch of its campaign. The weekend’s meet was the fourth of six consecutive weeks NU will swim. After the upcoming stretch, the Cats will not compete again until January.

Despite the mixed success, NU was able to push itself against a pair of tough teams, which will prepare it to face similar quality programs within the Big Ten.

“The Big Ten has a lot of fast teams,” Zhang said. “We need to race teams like (Missouri and Kentucky) if we’re going to get to that level, so with every meet that we go to like this, we get more used to racing fast teams, and I think that’s good for our mentality.”