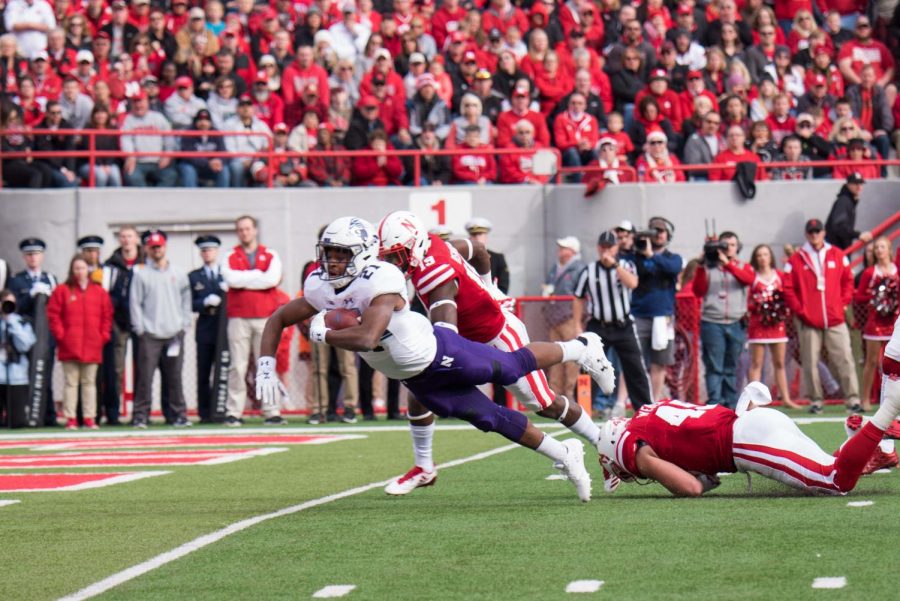 Justin Jackson dives into the end zone. The senior running back ran for 154 yards against Nebraska.

LINCOLN, Neb. — Northwestern football is not for the faint of heart.

That fact was displayed once again Saturday at Memorial Stadium, where the Wildcats (6-3, 4-2 Big Ten) went to overtime for the third consecutive week, topping Nebraska (4-5, 3-3) 31-24 and becoming the first team in FBS history to win three straight overtime games.

NU leapt out to leads of 7-0 and 14-7 early as it leaned on an explosive rushing attack. But the Cornhuskers made it a game in the second half and had a chance to pull out a win in regulation with a score in the final minute. Instead, Nebraska punted from the NU 40 with 45 seconds left in regulation, and the clock ran out on the Cats to send the contest to overtime.

NU lost the coin toss and then scored on a gutsy fourth-down quarterback sneak at the goal line to take a 31-24 lead. The defense then made the game-winning stop.

The Cats will return home for a game against Purdue under the lights at Ryan Field next weekend.

1. The Cats own overtime once again. The NU offense has been nothing short of phenomenal in extra time this season, and that trend continued against the Cornhuskers. After scoring a touchdown to open overtime against Iowa two weeks ago, the Cats defense then hung tough to deliver the win. Against Michigan State a week ago, it took three scores on three overtime possessions from the offense before the defense finally made an interception to seal the win. Yet another overtime score set the stage for the defense to finish things this Saturday, and it forced a four-and-out that gave the Cats their almost unthinkable third straight overtime win.

2. The Cats’ safeties saved the game. Though the NU defense struggled at times to get off the field and ceded 21 first downs, senior safeties Kyle Queiro and Godwin Igwebuike came up clutch. Queiro had a pair of interceptions to stop Nebraska drives, and he added a key pass breakup to keep the Cornhuskers from a go-ahead field goal attempt at the end of regulation. His partner in the defensive backfield, Igwebuike, had a crucial fourth-quarter interception in Cats’ territory to set up an NU scoring drive that tied the game at 24. Queiro’s pass breakup to end overtime was the cherry on top of a big playmaking day from the Cats’ senior secondary duo.

3. NU is going bowling. The victory gets the Cats to six on the year and ensures bowl eligibility for the third straight season. That streak began with a 30-28 win here in 2015 that put NU at 6-2 that season and continued last fall when the Cats crushed Illinois in their season finale. With three games still to play, all against thoroughly beatable opponents, NU has plenty of time to pad its resume and build a case for one of the Big Ten’s more prestigious bowl slots.