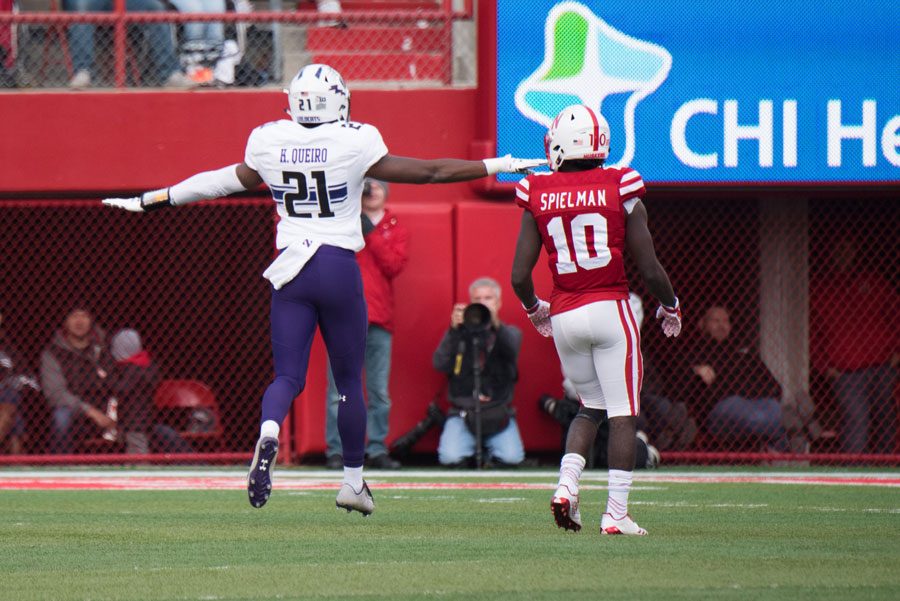 Kyle Queiro celebrates an incompletion. The senior safety intercepted a pair of passes against the Cornhuskers on Saturday.

LINCOLN, Neb. — While Northwestern’s offense prepared for a critical third-and-goal in overtime, Kyle Queiro stood anxiously on the sideline.

The senior safety wasn’t stressed about what had already been a career game for him: two interceptions, three additional pass breakups and six tackles. Nor did he feel bad about holding Nebraska receiver J.D. Spielman, who entered the game with 349 receiving yards over the past three weeks, to just three catches for 48 yards on the day.

Running through Queiro’s mind instead, he said, was his chance to end the game with a pick-six in the final minute of regulation — he had jumped a Nebraska out route and had nothing but grass between him and the end zone — that had slipped through his fingers.

“I was like, ‘If we lose this game, I had a chance to win it and I didn’t,’” Queiro said. “Thank goodness for Godwin (Igwebuike) and some of the other DBs (who said), ‘Just get that stuff out of your head.’ They just saw it on my face, I wasn’t even saying it.”

Igwebuike, Queiro and the rest of the Wildcats’ secondary had proven adept at reading faces all afternoon — particularly that of Nebraska quarterback Tanner Lee, who struggled against an NU pass defense that entered the weekend ranked an ugly 120th in the country.

Lee completed just over half of his 38 attempts and was picked off three times, the third and final of which squandered a golden opportunity for Nebraska to go up by two scores in the fourth quarter.

“They spent a good deal of time with different looks, kind of curveballs to the short side of the field,” Cornhuskers coach Mike Riley said of NU’s defensive schemes. “We got surprised with a couple of coverages.”

Queiro credited the work of the Cats’ scout team for helping the secondary prepare for the Nebraska receivers, none of whom topped 50 yards Saturday. He added that guarding junior receiver Jelani Roberts in practice was very similar to guarding Spielman during the game.

“Fitz challenged them this week in practice, and they accepted the challenge,” Fisher said. “I talked to Godwin earlier this week and I said, ‘I’m not worried about it. I know y’all are going to … get it fixed it up and get it right.’”

Fisher’s confidence in the unit behind him was justified for 60 minutes Saturday in Lincoln, as NU’s secondary held Lee — who had erupted for a career-high 431 yards against Purdue last week — to just 217 passing yards in regulation.

Then, come overtime, it was justified again.

Moments after the Cats punched in the go-ahead touchdown on that fourth-and-one, the Cornhuskers were backed into a fourth-and-12 hole, and Queiro found the game’s outcome in his hands yet again. Tracking Spielman man-on-man in the slot, Queiro read a curl route.

This time, Queiro didn’t even need an interception. He simply batted Lee’s pass away and closed the book on NU’s fourth consecutive victory.