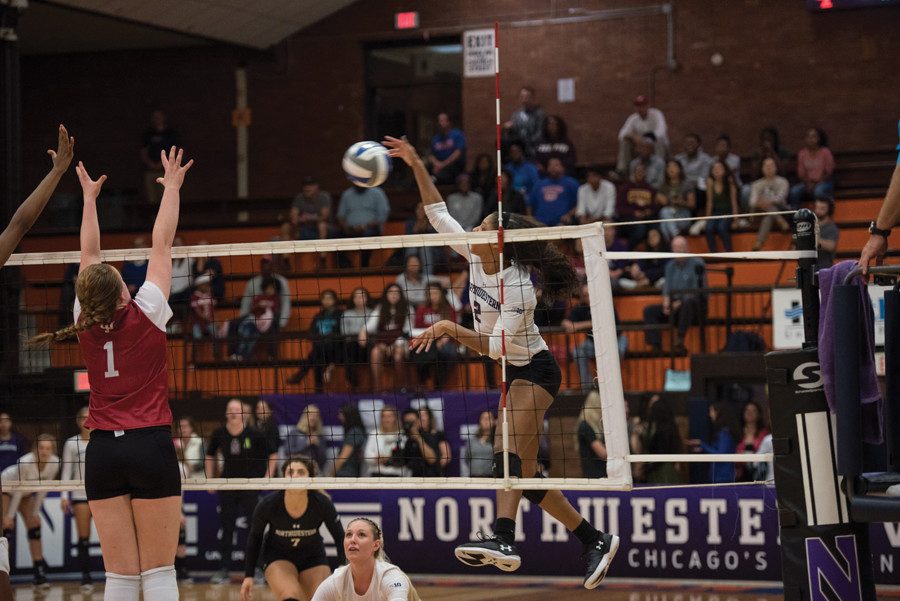 Symone Abbott spikes the ball. The senior had nine kills in the Wildcats’ loss to Illinois on Wednesday.

Well into the season, Northwestern is still struggling to pick up Big Ten wins despite improved play as of late.

NU opened strong and peaked in the second set. Throughout the frame, the Cats and the Fighting Illini fought neck and neck. Neither team led by more than three points at any time in the entire set, with NU opening up a 19-16 lead toward the end.

But Illinois ripped off a 6-0 run down the stretch to take a 22-19 lead and held on to claim the set.

“The second set was definitely a dog fight at times,” sophomore outside hitter Allie Lindroth said. “We had some really good extended rallies, and with each team getting tired out, it’s a really good mental and physical test to overcome the challenge. … We took it inch by inch, and we knew we were so close that we could taste it.”

But after falling short in the second set, NU struggled to gain ground in the third and final frame. Illinois opened with an early 11-6 lead, and though the Cats cut the deficit to 13-10, they faded in the closing moments. The Fighting Illini secured their sweep of NU with a 12-5 run.

Despite the loss, the Cats stayed focused on the silver linings. Coach Shane Davis said the team’s improvement from its last match was evident.

“In general, we knew we got better from our last match. … Our heads are still up,” Davis said. “We were able to stabilize our serve-receive a little bit better this time and (be) more balanced as an attack.”

NU’s offense was led by senior outside hitter Symone Abbott, who returned after missing the past two matches with a leg injury. The veteran logged nine kills, while freshman outside hitter Nia Robinson led with 13.

The two are among the Big Ten leaders in kills per set, with Abbott leading the conference with 4.29 and Robinson sitting sixth at 3.58. But Illinois’ staunch defense, which averages 2.99 blocks per set to lead the conference, picked up 12 more blocks against the Cats and limited the duo’s impact.

With the season winding down and only three Big Ten wins under NU’s belt, sophomore middle blocker Olivia Viscuso said the team will be motivated to reward the seniors for their contributions before their careers come to a close.

“When the season’s coming to an end that means the seniors have less time,” Viscuso said. “They’ve poured so much of their career and time into (volleyball). All of us should be working hard for them and for the rest of the team to make the most of the time we have left.”