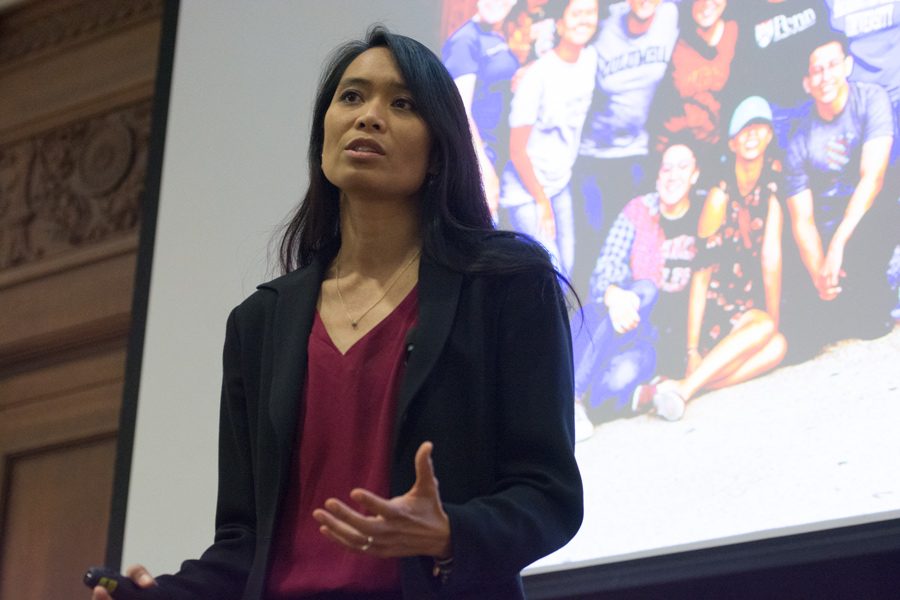 Ana Rowena McCullough, co-founder and CEO of QuestBridge, speaks at an event in Harris Hall on Wednesday. McCullough, who was a first-generation college student, emphasized the importance of higher education.

QuestBridge co-founder and CEO Ana Rowena McCullough said because her parents grew up in the Philippines in families with few resources, they could have been scholars in the program. Working with QuestBridge now feels like an opportunity to honor their hard work, she said.

McCullough spoke Wednesday about her work as the co-founder and CEO of QuestBridge, a nonprofit with modest beginnings that grew into a national organization. About 100 people attended the event in Harris Hall, hosted by the Quest Scholars Network and Student Enrichment Services.

McCullough said QuestBridge is important because it provides higher-level education opportunities to low-income, first-generation students, matching them to one of 39 participating universities — including Northwestern. She said the program is designed not only to provide financial opportunities for QuestBridge scholars, but also to encourage these students to take on leadership positions in the future.

“Our hope is that as QuestBridge scholars go out into the world, their skills, what they learned in college, but also their unique and authentic perspectives from where they grew up can actually infuse the ranks of leadership in America,” McCullough said.

McCullough said the program has grown because participating colleges seek out QuestBridge scholars.

“Our theory was right, that the colleges really do want these students and they are willing to pay the financial aid,” she said. “Also, that there are lots of students out there who meet that demand. We haven’t run out of students yet.”

There are now more than 7,000 students and alumni involved, McCullough said.

McCormick junior Yasmeen Wood, a QuestBridge scholar, told The Daily the program allowed her to achieve her goal of attending an out-of-state university. She said her high school peers applied to QuestBridge, which motivated her to take the same step.

McCullough said QuestBridge “allies” — non-scholars who support the program’s mission — also have a role in its
growth. She added that allies should listen with curiosity to the stories of QuestBridge scholars and use their voices to spread the organization’s message.

Weinberg freshman Caty DeBroux, who told The Daily she attended the event as an ally, said she recognizes that McCullough has impacted the lives of many students across the country, and has empowered them through the program.

“For some people, the Quest program is the reason that they’re going to be doctors or lawyers or other agents of social change,” DeBroux said.

Correction: A previous version of this story mischaracterized Ana Rowena McCullough’s upbringing and misstated Harvard University’s involvement with QuestBridge. McCullough said her parents could have been QuestBridge scholars, and Harvard participated in a summer program. The Daily regrets the errors.