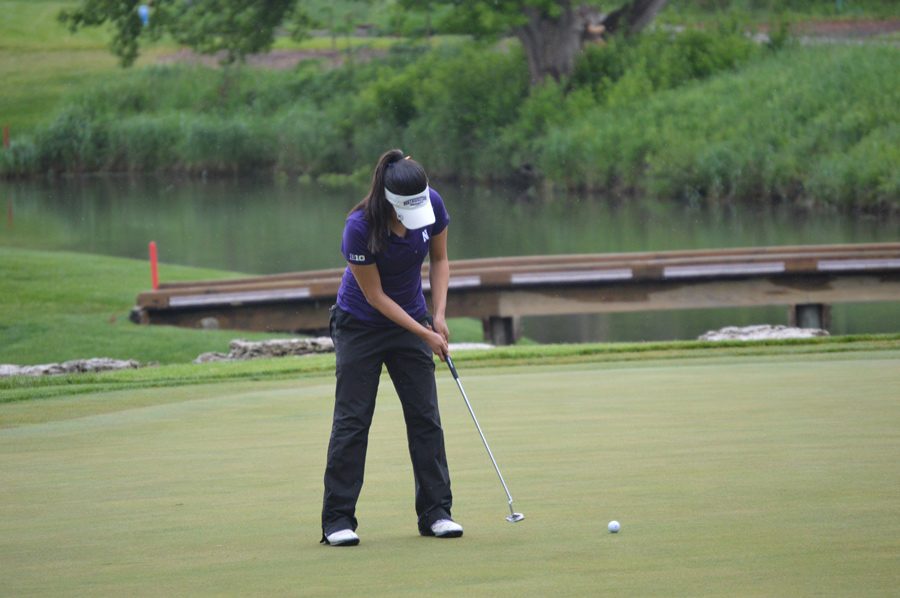 Hannah Kim strikes a putt. The senior won both of her match play matches at the East Lake Cup.

Last year, the Wildcats finished second, taking down the Trojans in the semifinals before dropping the championship match to the Sun Devils. This time, they lost their first matchup to USC before falling to Arizona State for the second time.

“It’s really the closest we’ve been to a championship-level environment since nationals,” coach Emily Fletcher said. “The match play competition and some of the best teams in the country is a pretty rare combination.”

The Trojans, who fell victim to a furious NU comeback in May, emerged victorious in the overall tournament, taking down the Cardinal in the final.

The Cats, meanwhile, struggled in their two matches, dropping their first rematch 4-1 while battling Arizona State much closer but still falling 2-1-2 to finish in fourth place.

“We didn’t get the result we wanted, but it was still a solid performance,” Fletcher said. “Brooke Riley was really impressive. She battled Linnea Strom, really one of the best women’s golfers in the world, all day and finished all square.”

Senior Hannah Kim was responsible for both NU victories, taking down USC’s Muni He 3&2 in the semifinals. Kim didn’t trail the entire match.

Wednesday’s match with Arizona State’s Madison Kerley was much closer, with Kim falling behind early and not taking the lead until the 14th hole, at which point she took two of the final three holes to win 3&1.

“Just being able to focus on my opponent, that was a big component for me,” Kim said. “I didn’t have to worry about anything else.”

The first round seeding was determined by a single round of stroke play Monday, in which the Cats finished third. Junior Janet Mao led the way, tying for second, only one stroke behind the leader.

In the 20-person field, however, senior Sarah Cho was the only other NU golfer to finish in the top half with a ninth-place finish, five strokes off the lead.

“This is a course where the rough is really punishing,” Mao said. “In that first round, I just did a really good job of striking the ball and staying in the fairways.”

The trip to Atlanta represented the end of the fall season for the Cats, who finished with three top-5 finishes in their four previous tournaments in addition to the East Lake Cup. Fletcher described the season as “above average” while adding they still haven’t had a complete team performance.

Even with the team’s impressive results, NU will look to emerge stronger in February.

“As a team, we’re going to work on getting stronger in the offseason,” Kim said. “My ball-striking and distance are going to be my own focus.”