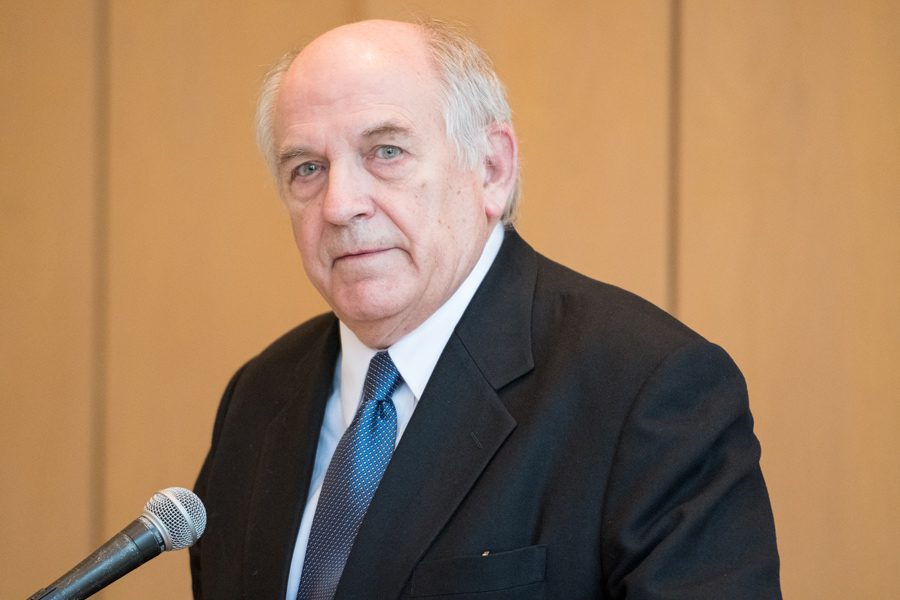 Political scientist Charles Murray, whose appearances have sparked rowdy protests on some college campuses, spoke Wednesday about the conditions that led to President Donald Trump’s election and criticized what he called “toxic” identity politics at an event hosted by College Republicans.

The author of “The Bell Curve,” a book that suggests a connection between race and intelligence, spoke to about 50 students in Parkes Hall.

During his remarks, Murray said deterioration in the status of working-class white men helped lead to the election of Trump, whom he opposed. He also fielded questions from the audience, some of which centered on his controversial views about race.

“Identity politics, in all the ways it is practiced, is toxic,” Murray said. “Now you’ve got … white guys who are saying, ‘If it’s OK for them, it’s OK for us.’ I do not see an optimistic way out of it.”

The event had a significant police presence. College Republicans president David Donnelly praised attendees for not interrupting or disrupting, and told The Daily that the lack of incidents at events hosted by College Republicans is his “proudest thing about Northwestern.”

During the Q&A, Murray was asked about the perception that he is racist. Murray responded by quoting from the text of “The Bell Curve” — co-authored with Richard Herrnstein — which claims it is likely that neither genetic nor environmental explanations exclusively account for racial differences in IQ but leaves open which is of greater importance.

“That is the sum total of Charles Murray and Dick Herrnstein’s racist diatribe,” Murray said.

In the final question, Communication freshman Delia Cunningham told Murray she disagreed with his notion of American exceptionalism. She asked him why he cares “so much more deeply about that tradition than about the rights and dignities and opportunities afforded to people of color and women?”

In response, Murray told her that she came across as “a very angry woman who is not going to care about anything I say.”

Elaborating on his position of American exceptionalism, Murray said there had never been a country that denied special rights and privileges to an aristocracy prior to the creation of the United States.

SESP freshman General Gashaw said she attended because she wanted to hear a different perspective. Gashaw added that opinions should be heard even if they are wrong.

However, Gashaw said she left the event believing that Murray is racist. She added that College Republicans could have brought someone to campus “able to articulate conservative ideas that aren’t necessarily in a way that is as oppressive as Dr. Charles Murray.”

Murray is labeled as a “white nationalist” by the Southern Poverty Law Center. His appearance at DePaul University later Wednesday drew protesters, and a protest at Murray’s Middlebury College talk last winter left a professor with a concussion.

Donnelly defended the decision to bring Murray and said that Murray’s views do not represent all members of College Republicans.

“I don’t think it’s actually productive at all to just kind of throw the label of white nationalist or racist on somebody and then work kind of backward from that,” the McCormick senior said. “We at Northwestern need to be a little more dynamic in our thinking.”

He said his group comprises a wide range of political views and wants to present as many conservative voices as possible on campus.

But Cunningham said she was disappointed by College Republicans’ decision to invite Murray.

“I’m really embarrassed to be at a university where the College Republicans are not actually attempting to redefine what ‘conservative’ is in this political climate,” Cunningham said, “and instead leaning into the bigotry and absolute white supremacy perpetrated by speakers and authors like (Murray).”