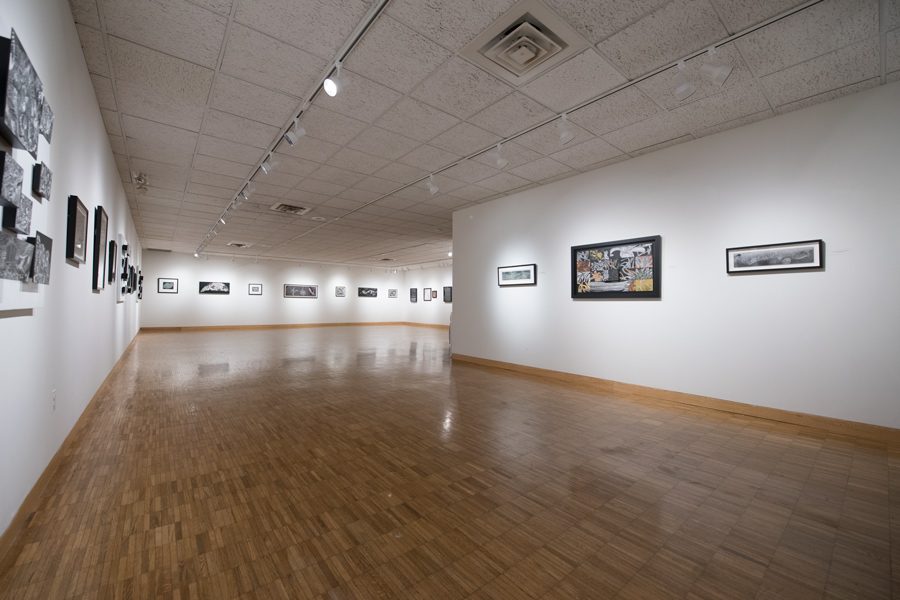 “Storylines,” an exhibition curated by Lisa Goesling, opened Oct. 20 at the Dittmar Memorial Gallery. It will run through Nov. 27.

Many expect the artistic process to be a series of drafts and redrafts, with frustration building after each failed attempt. For scratchboard artist Lisa Goesling, though, the process looks quite different. She creates all her work without drafting, and only gets one shot to get it right.

“We’re all taught not to fail and to be perfect, and it’s an interesting study when you think about how perfect these pieces might look, but they’re really very imperfect,” she said.

Goesling’s latest exhibition, “Storylines,” features her “Environmental Movement” series, which is inspired by ecopsychology –– the study of how humans feel when interacting with nature. The scratchboard display opened at the Dittmar Gallery on Oct. 20 and will run through Nov. 27.

Scratchboard is a medium where artists carve images into pieces of hardboard covered in kaolin clay and a layer of ink. The amount of pressure applied to the board determines how white the clay will be, as well as the depth of color if the artist applies colored ink.

Goesling said she first became interested in the art form while battling cancer. She found the “leap of faith” it required liberating, she said.

She has since attempted to help others attain this sense of escape through scratchboard workshops with cancer patients at the Swedish Covenant Hospital in Chicago, Goesling said. When she set scratchboards in front of the patients and urged them to begin, many were hesitant to start and afraid to fail, she said. Only after Goesling encouraged them to “jump right in” did they overcome their hesitation and begin drawing.

She said she witnessed the “magic” of scratchboards when a friend was rushed to the hospital after suffering a heart attack. The unresponsive friend refused to eat or move out of the fetal position until she was given a scratchboard by a social worker at the hospital. She spent the next hour and a half filling it completely and was discharged the very next day.

“I don’t think that scratchboards are magical, but they certainly serve as a means of escaping for some people and it’s a beautiful thing,” she said. “We can all use that.”

Alicia Forestall-Boehm, a Chicago artist and Goesling’s former colleague at the Illinois Artisans Program, said the intricacies of Goesling’s artwork are particularly apparent to those who see it in person.

“As somebody who’s seen a piece of her art maybe a number of times at different exhibitions, I find something different to see every time I look at the same piece because there’s so much detail,” Forestall-Boehm said.

While some of Goesling’s work depicts nature, her “Spontaneous Combustion” pieces at the “Storylines” exhibit are more abstract. Goesling said when she creates these abstract pieces, she doesn’t have a set plan but rather brings out designs that were “sitting within the board.” The title of this series comes from this spontaneity and the intense energy that results from the process, Goesling said.

Barb Blacharczyk, another Chicago artist and friend of Goesling, also noted the energy in Goesling’s works. She said the intensity and emotion within the pieces makes them appear larger than life.

“You have to see them in person because there’s almost a kind of vibration or movement to them that you can’t get in even a really good digital photo because of the texture she brings out of the scratchboard,” Blacharczyk said.

Goesling added that she hopes the gallery’s visitors embrace the same energy that she does in her art, and that they’re as excited to see it as she was to create it.

“I just hope that they can be taken away for just a short bit and have … that intimate moment with (the art),” she said. “It’s OK to be vulnerable and take chances.”