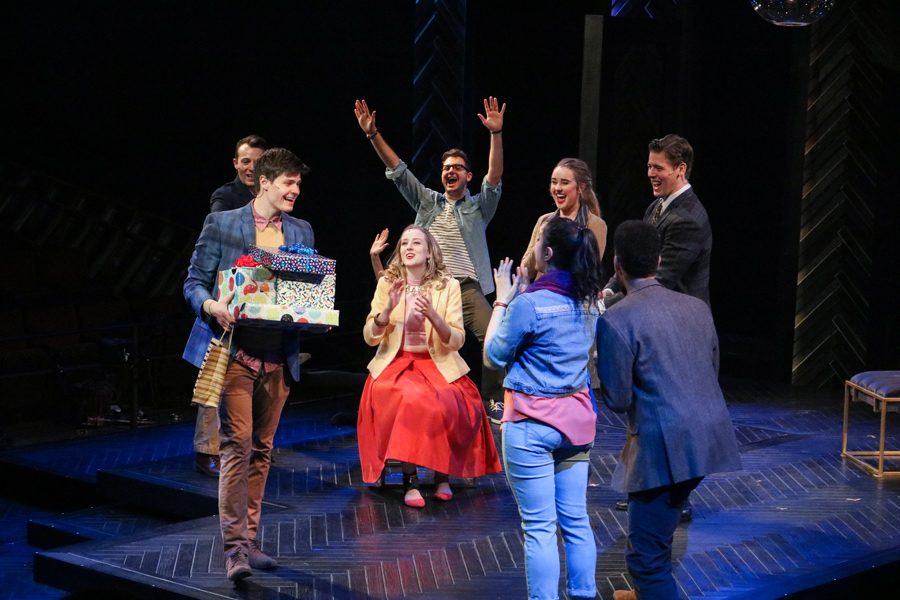 Students rehearse Stephen Sondheim’s “Company,” which will premiere as Northwestern’s fall mainstage Friday. The production will run at the Ethel M. Barber Theater for three weekends.

Stephen Sondheim’s music has been played across the globe — from Broadway to the West End, and from high school productions to professional theaters. This fall, his compositions are slated to appear on Northwestern’s mainstage.

“Company” hits the stage Friday at the Ethel M. Barber Theater, beginning its three-weekend long run as a mainstage production for the Virginia Wadsworth Wirtz Center for the Performing Arts.

The show revolves around Bobby, a bachelor celebrating his 35th birthday surrounded by his best friends — all of whom are married or engaged couples. During the course of the evening, Bobby reflects on his life and ponders whether he is ready for marriage.

Communication sophomore Eli Cohen, an assistant director for the production, said the show is told through a series of flashbacks that explore the intricate and unique relationships in Bobby’s life. Cohen said the show is “more than what meets the eye,” and it delves into Bobby’s ongoing struggle with navigating his future.

“A lot of people approach ‘Company’ like, ‘Oh it’s a show about marriage,’ but it’s about so much more than marriage,” Cohen said. “It’s about discovering who you are in the world, and about discovering that sometimes you may or may not be ready for certain things in life, and that’s OK, even though people may tell you it’s not.”

Brown, who directed another production of “Company” over a year ago at Writers Theatre in Glencoe, Illinois, said the show is “terribly modern” and unique among Sondheim musicals.

“It’s unlike any music (Sondheim) has done,” Brown said. “There’s almost kind of a pop feel, but a pop feel that’s kind of rooted in things like Bossa Nova and older forms of popular music.”

Bienen senior Noah Landis, the show’s music director and conductor, said the music is a “hit parade” of Sondheim’s greatest and most well-known songs. Sondheim, he said, is an incredibly inventive composer and lyricist whose work is “unlike anyone you’ll hear in the theater.”

The cast is comprised of 17 actors, all of whom are Northwestern students. Though the actors are several years younger than their roles, Brown said it has been an incredible experience witnessing the “surprising vulnerability” of the cast and seeing how the show is different from his prior production.

Above all else, Brown said he wants the show to bring to life characters that people understand and empathize with. Though the play was written decades ago, the musical’s themes still resonate with audiences today, he said.

“Each of those couples, they really are loving friends, but sometimes even the best-intentioned people don’t really understand what their friends need,” Brown said. “We all do that, we all get in the way of … people we love because we can’t help but think there’s a way they should be.”

Landis said the show strikes the perfect balance of humor and intrigue. He said the musical paints a “very full picture” of relationships in the world of these characters and will allow audience members to leave the theater thinking about their own lives, and where they’re hoping to go.

“It’s definitely that kind of a show where you will laugh and you will think,” Landis said. “That is some of the best of what theater can be.”