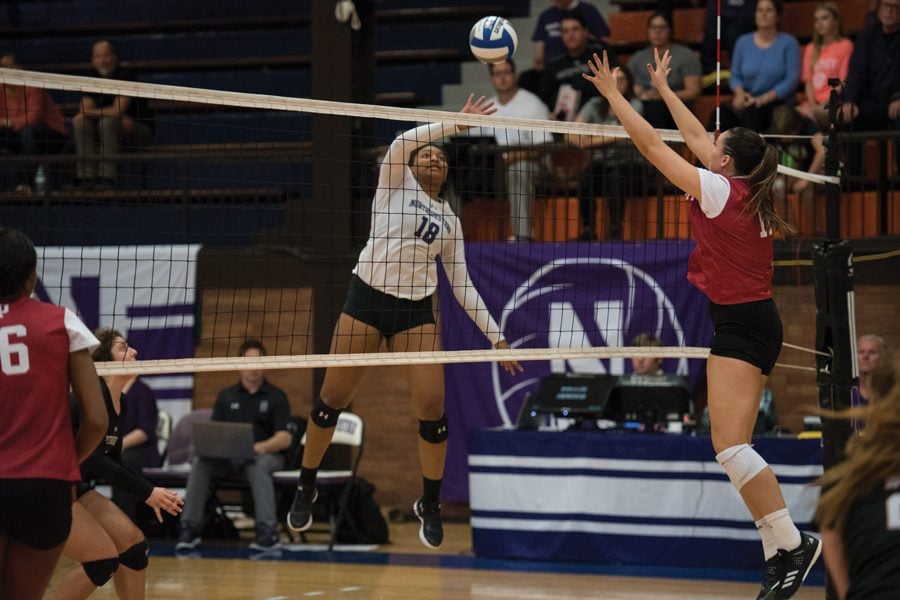 Nia Robinson goes up for the ball. The freshman outside hitter and the Wildcats will battle Illinois on Wednesday.

After an impressive start to the 2017 season, Symone Abbott missed two matches with a recent leg injury. But the potential return of the Big Ten’s leader in kills per set could provide a boost to Northwestern’s upset chances.

The Wildcats (13-11, 3-9) will head south to Illinois (16-7, 7-5) on Wednesday with a familiar goal: to pull off an upset over a highly regarded Big Ten team. The Fighting Illini received votes in the coaches poll, while six other conference opponents appeared in the top 25.

Those matchups have been challenging for NU; most recently it lost 3-0 against No. 8 Wisconsin, and the Cats have yet to win a set in any of their five contests against ranked teams this season. They were previously swept by Illinois at home.

“Against Wisconsin I think it showed that we’re gonna have to work hard through the Big Ten,” senior middle blocker Gabrielle Hazen said. “We can’t just go into these matches and expect to just kind of play Northwestern volleyball. We have to show up every day and be ready to work.”

Though the losses can take a toll on the team’s confidence, Hazen said the Cats have to put mistakes behind them to prevent them from compounding and giving the other team momentum.

Against the Badgers, NU put together a strong first set but did poorly in the second, losing 25-9. In the third set, the Cats played better, losing by a closer score of 25-16. Freshman outside hitter Nia Robinson said the lessons learned could help them in Champaign.

“There’s a lot of growth that happened throughout the sets,” Robinson said. “That fight that we had going into the third set, we are going to start off with that and carry that through the entire match this weekend.”

Robinson, who has stepped up while Abbott has been sidelined, helped lead NU in the Wisconsin match and recorded a team-high 13 kills — 10 more than the next-highest player.

She shined in the first match Abbott missed against Rutgers, notching 24 kills on a superb .526 hitting percentage in three sets against the Big Ten bottom-dwellers. Coach Shane Davis said he was impressed with Robinson’s ability to play in every spot, even on the back line.

“She’s done a great job filling in the role since Symone’s injury playing all the way around, getting very comfortable back there, so that’s been great to see,” Davis said.

Even with the freshman taking a bigger role, the Cats distributed the hitting load more evenly to prevent opponents from keying in on Robinson while the team’s leading hitter was out.

After a two-game hiatus, Abbott is “back and healthy and feeling good,” Davis said. With a return possible, her presence in Illinois could provide a boost to NU’s upset chances as the gauntlet of Big Ten play continues.

“We’re feeling good about where we are,” Davis said. “We’re staying positive and we just got to get over the hump here.”