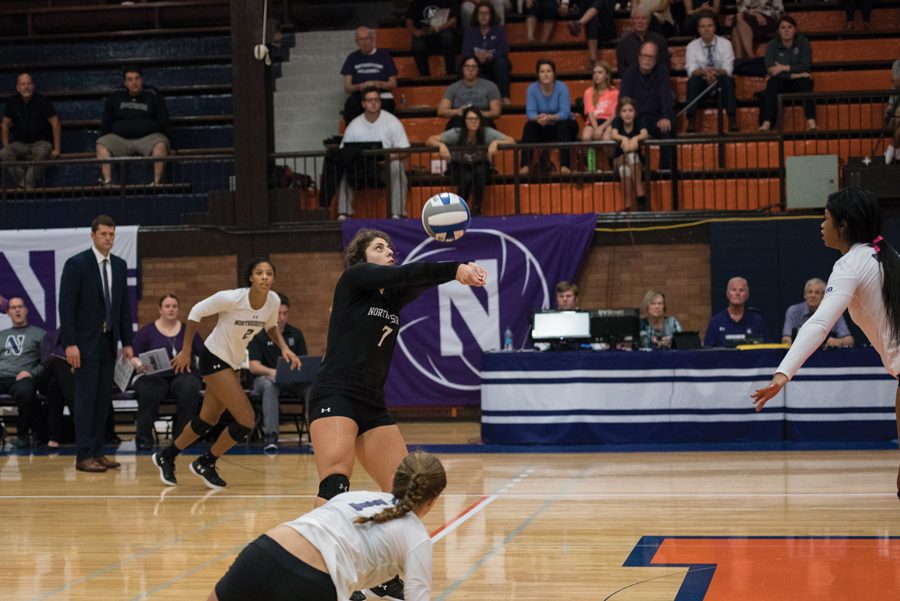 Lexi Pitsas digs a ball. The freshman libero and the Wildcats fell at Wisconsin in straight sets on Saturday.

NU has yet to claim a set in five matches against ranked teams this Big Ten season.

“The Big Ten is really tough right now,” senior setter Taylor Tashima said. “Last week the Big Ten had five of the top ten teams ranked in the nation. … We just can’t let these (losses) get us down.”

A strong start from freshman outside hitter Nia Robinson — who filled in for the injured Symone Abbott for the second-straight match — helped keep things close for the Cats. Wisconsin held a 15-14 edge to start the first set, but sophomore libero Sarah Johnson’s service error sparked a 6-0 run for the Badgers.

“Still learning, and still trying to be my best,” Robinson said. “I look up to Symone a lot so I’m trying to do what she does and add my own to eventually be as good as she is one day.”

The second set was initially knotted at 4 before Wisconsin pulled away behind a 10-0 run.

The Cats again got off to a 5-4 lead to start the third set, but the Badgers slowly pulled away in the frame to secure the sweep.

Robinson tallied a match-high 13 kills, while sophomore outside hitter Allie Lindroth and sophomore middle blocker Olivia Viscuso each chipped in three. Tashima recorded all 23 of NU’s assists, while freshman libero Lexi Pitsas led the way with 10 digs. The Cats did not record an individual block in the loss.

Despite the rough result, coach Shane Davis said he knows he has a relatively young squad going through growing pains. Three of NU’s seven starters are freshmen, and his young players’ effort gives him hope moving forward.

“All the freshmen are great,” Davis said. “There’s seven of them, and even when they’re not on the floor, they’re doing a heck of a job in the gym and pushing each other. They’re all leaders in their own way, they’re doing an outstanding job for us.”

Though the Cats have lost six of their last seven matches, Robinson said she’s not hanging her head, and the team is finding silver linings in their losses to elite opponents.

“We are doing good things, and we need to take the good things and build on them rather than dwelling on the negatives,” Robinson said.