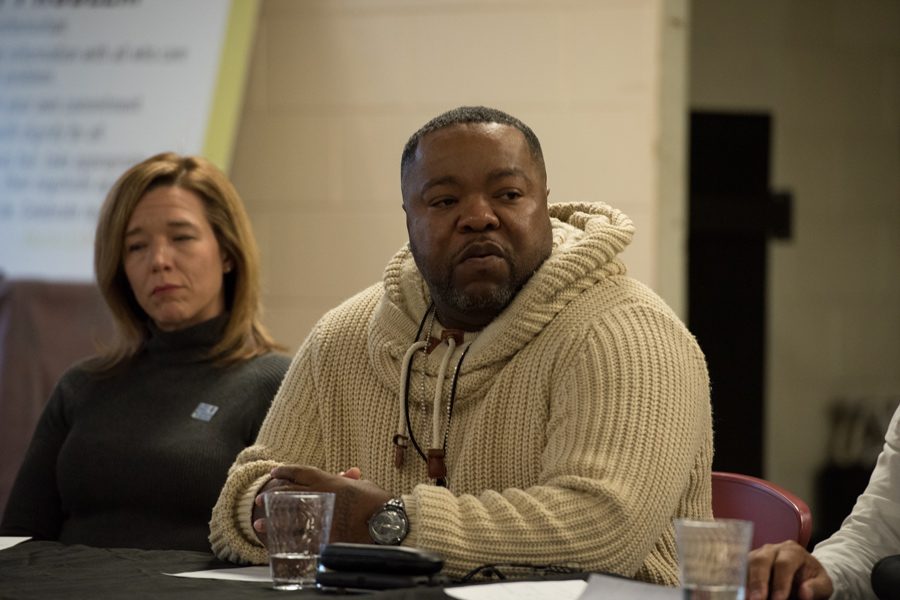 Chicago community organizer Deon Patrick at a Saturday panel on gun violence. The event was sponsored by Action for a Better Tomorrow’s Evanston chapter and Dear Evanston, a Facebook group that examines race, inequality and youth gun violence.

In 1992, Deon Patrick was convicted in a double murder that he did not commit. Two decades later, he walked free.

Patrick said because he was shot around the age of 17, he grew up with a false sense of “invincibility” that made him make irrational decisions. This mindset, he said at a Saturday panel on gun violence, put him in a position that eventually led him to be wrongly convicted.

“I had a lot of time to sit down and think about who I was as a person, who I was raised to be, and it changed my outlook on life,” Patrick said. “I made a conscious decision that if I ever got the opportunity to come home … I was going to be a part of the solution and not a part of the problem anymore.”

Patrick, a community organizer in the Chicago neighborhood of Austin, was one of six panelists who discussed gun violence in the Chicago area at the Grace Lutheran Church on Saturday. The event was sponsored by Action for a Better Tomorrow’s Evanston chapter and Dear Evanston, a Facebook group that examines race, inequality and youth gun violence.

“Gun violence is a problem for all of us,” Knizhnik said. “Anyone who thinks they’re safe from it is fooling themselves. We must come together because if we don’t, it will be more of the same.”

At the Institute for Nonviolence Chicago, Patterson helps train communities — specifically young people — in “Kingsian nonviolence,” which is a system of concepts and strategies to reduce violence and foster peace. Patterson said he has been “directly affected” by the issue — he was shot and also lost two brothers to gun violence.

Patterson said he used to keep track of all his friends who had been shot and killed, but stopped once the number reached the 20s years ago.

“It’s countless young people who we’re working with who are shot and killed,” he said. “It’s gotten to the point where I think I’ve recovered a little bit, but I’ve stopped going to funerals because it was so much.”

Knizhnik said most of the guns in the Chicago area are actually bought in states with weaker gun restrictions like Wisconsin and Indiana, calling Chicago an “island” surrounded by a “sea of very bad gun laws.”

She added that she has been lobbying for the Gun Dealers Licensing Act — a bill that would help fill the gaps left by the underfunded federal Bureau of Alcohol, Tobacco, Firearms and Explosives — to pass through Illinois state government.

“It’s a proactive bill,” Knizhnik said. “We’re not trying to stop a bad gun bill, we’re trying to pass a good one.”

Nina Kavin, co-founder of Dear Evanston, said she helped organize the panel to show the many ways of addressing gun violence and to highlight people’s experiences with the issue.

“Because the topic is so overwhelming, and there’s so many angles to come at it from, you can’t get nearly enough experts in the room to address it,” Kavin told The Daily. “But what I loved about this panel is we had people who had real, first-hand experience with gun violence.”

Bobby Burns, president of Evanston Collective — which empowers and supports African-American ideas and families — attended the event and told The Daily that minority groups need economic and political power to establish themselves outside of their marginalization.

To have healthy interactions about gun violence in Evanston, he said, people must continue to be receptive to other points of view.

“As long as the conversation is open and we’re willing to be wrong, we’re willing to walk into a place with one set of beliefs and … maybe leave with a different perspective and a different opinion,” Burns said, “then we can have healthy interactions in the community.”

This story was updated to clarify Nina Kavin helped organize the panel.