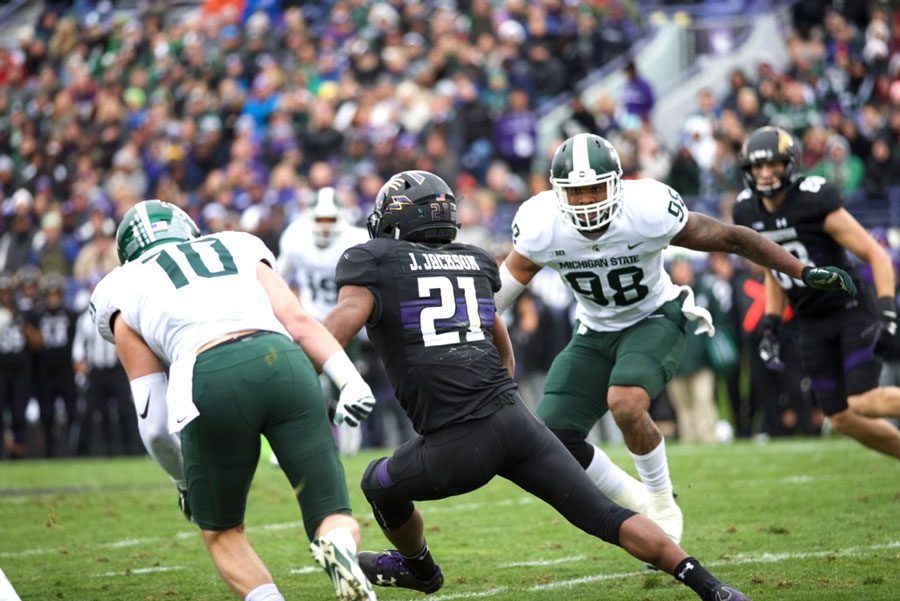 Justin Jackson darts upfield. The senior running back contributed to Northwestern's win over Michigan State on Saturday in a variety of ways.

Justin Jackson wasn’t exactly “The Ball Carrier” on Saturday, but he still found ways to get the job done in Northwestern’s 39-31 triple-overtime win over No. 16 Michigan State.

The senior running back rushed for only 41 yards on 17 carries against a stout Spartans (6-2, 4-1 Big Ten) defense, so the Wildcats (5-3, 3-2) utilized Jackson more creatively than normal. Jackson caught seven passes for 51 receiving yards Saturday, his highest totals in both categories since a Nov. 19, 2016 loss to Minnesota.

Jackson even threw — and completed — his first career pass, connecting with sophomore receiver Ben Skowronek for a 12-yard touchdown on a trick play in the fourth quarter.

“We actually didn’t work on that this week, but we’ve been working on it since training camp,” Jackson said. “(Skowronek) always says, ‘Just throw it up,’ so I tried to do that. It didn’t look great, but it accomplished the goal.”

Michigan State seemingly came into Saturday prepared to stop Jackson on the ground, repeatedly stacking the box with seven and eight defensive players. The Spartans allowed an average of 93.4 rushing yards per game entering the contest, good for second in the Big Ten and eighth in the FBS.

But Jackson continued to be involved, especially early in the game. Six of Jackson’s seven receptions occurred before halftime, as he remained a pivotal element in the Wildcats’ offense after they fell behind 10-0.

“Most of them were check-downs, so I think (junior quarterback Clayton Thorson) is just looking for me a little bit more,” Jackson said. “There was another one that was a screen we had just put in this week, but other than that I’m just trying to be available for Clayton.”

Those check-downs helped NU break through against Michigan State’s front seven. One week after Jackson set up a game-winning touchdown in overtime against Iowa with impressive open-field elusiveness, Thorson targeted Jackson nine times against the Spartans.

Despite successfully utilizing Jackson’s versatility this week, the Cats will likely stick with a more run-focused approach for the running back. Coach Pat Fitzgerald shot down the possibility of future Jackson touchdown passes almost immediately.

But with four regular-season games left in Jackson’s career, Fitzgerald wants him to go out strong.

“Today we were able to get some positive matchups,” Fitzgerald said, “but obviously Justin in space is something we want to try to get accomplished as much as we can.”