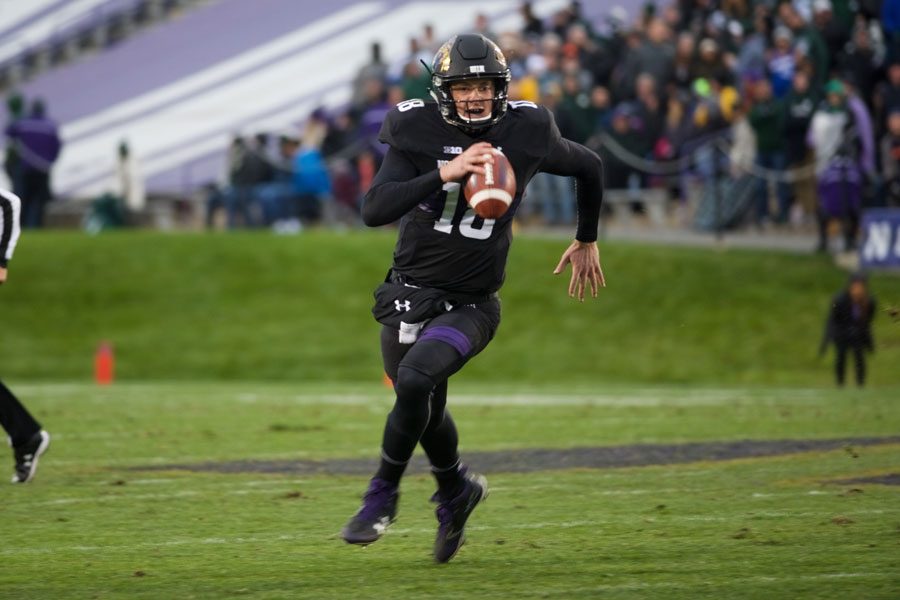 Clayton Thorson runs with the ball. The junior quarterback tossed for 356 yards against Michigan State.

The ball hung in the air Saturday in the final moment of Northwestern’s battle with No. 16 Michigan State, as the outcome dangled in the balance. Spartans quarterback Brian Lewerke had just been stripped before recovering and heaving a high-arcing pass toward the end zone.

“Everyone was just holding their breath,” said running back Justin Jackson, who watched from the sideline.

On the other end of the throw waited junior linebacker Nate Hall.

Hall said he “just played the ball,” fighting for position and then making a game-ending interception that sealed a 39-31 triple-overtime upset victory for the Wildcats (5-3, 3-2 Big Ten) and launched a gleeful student section onto the field in celebration.

A week after topping Iowa at home in an overtime thriller, the Cats made the drama against the Hawkeyes look quaint. The contest in front of an announced crowd of 39,369 was the first at Ryan Field to require three overtimes since 2013 and the first triple-overtime victory in school history.

“What a heck of a ball game,” coach Pat Fitzgerald said. “If you look at the regulation aspect, it was a really hard-fought defensive game, and I think that’ll get lost in the final stats. … It was tough to gain any inches on either side.”

It was also a game dictated by each team’s quarterback. As each defense stiffened along the line and each rushing attack struggled to find holes, the two squads aired the ball out aggressively.

Jackson ran for just 41 yards, making a larger mark in other areas. The senior threw his first career pass, hitting sophomore Ben Skowronek for a touchdown on a trick play, and also hauled in seven catches. And LJ Scott, Michigan State’s starting tailback, ran for just 16 yards as Lewerke tossed for 445 yards on 57 passing attempts.

Against that backdrop, junior quarterback Clayton Thorson stepped up and matched Lewerke pass-for-pass in what developed into a shootout late. Thorson torched the Spartans secondary for 356 yards and a pair of touchdowns and came up clutch time and time again in the overtime periods.

The performance in the air came at the expense of a vaunted Michigan State defense that entered the afternoon allowing a conference-best 262 yards of offense per game.

“As a quarterback now, you’re the hero or you’re the zero, that’s just the way that it works out,” Fitzgerald said. “When you win, and we complete more balls than we don’t and we don’t throw picks, that’s a special day. And he had, I thought, a great game. I really thought he took what the defense gave him.”

Thorson’s performance helped the Cats come back in a game they trailed 10-0 in the second quarter. Equally key was a largely stout performance from the NU defense.

For much of the game, the Cats managed to limit the damage from Lewerke’s downfield fireworks. But after holding tough for the bulk of the day, NU surrendered a Michigan State touchdown with 25 seconds remaining in regulation, setting the stage for extra periods.

Both teams scored in the first two overtimes. In the third, Thorson hit junior receiver Flynn Nagel for a 22-yard touchdown that set up the defense to make the final stop.

Sophomore defensive end Joe Gaziano came after Lewerke from behind on the game’s final play and stripped the ball. Lewerke recovered momentarily, but then tossed the pick.

Exhausted, Gaziano said he kneeled and watched as his teammates swarmed Hall at the goal line and as the floodgates opened at the student section.

The victory represented NU’s first over a top-20 team since it snuck past Notre Dame in overtime on the road in 2014. And with early-season disappointments fading in the rearview mirror, the Cats seem to be hitting their stride heading into November.

“These are the games that we live for,” Thorson said. “This is a big game for us. These past two, three weeks — three Big Ten wins is really tough to do, against three really good teams. This is a win that we need to catapult us for the rest of the season.”