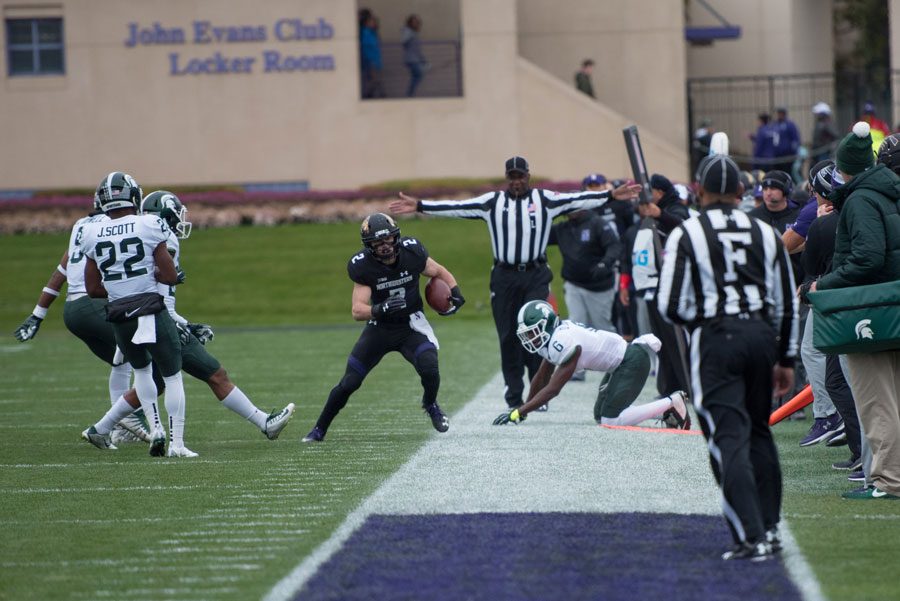 Flynn Nagel steps out of bounds. The junior receiver caught the final go-ahead touchdown in Northwestern's win over Michigan State on Saturday.

After 60 minutes of regulation couldn’t break the deadlock between Northwestern and Michigan State and two overtimes were similarly unhelpful in determining a victor, the Wildcats finally separated themselves.

The interception, which came after Lewerke picked up the loose ball and lofted a toss toward the end zone, led to a rush of students storming the field to celebrate the Cats’ second overtime win in as many weeks.

“It’s kind of like playing backyard football with your brothers,” coach Pat Fitzgerald said. “It went into a scramble drill. … Just a great play by Nate.”

Redshirt freshman linebacker Paddy Fisher, who chased Lewerke as he scrambled, then turned around to watch the final sequence.

“I saw Nate come down with it,” Fisher said. “And after that it was surreal.”

NU’s standout defense in the third overtime marked a turnaround from the first two extra periods, in which the Spartans moved the ball crisply. Lewerke completed three passes on Michigan State’s touchdown drive in the first overtime, and the visitors needed just two plays to score in the second additional period.

But in the third overtime, Fisher hurried Lewerke into an incompletion on first down,
setting up the game-winning work by Gaziano and Hall on the next play.

“We had confidence in our offense, and obviously they got the job done,” Hall said. “That inspired us to keep battling as well.”

Despite its eventual success, the Cats’ offense found itself in a tough spot in the third extra period. An incomplete pass and short rush gave NU third-and-seven at the 22-yard line, the Cats’ only third down play of the additional sessions.

Junior quarterback Clayton Thorson had enough time to find Nagel underneath, and the receiver went untouched until roughly the 10-yard line. There, he was slowed by a would-be tackler, but Nagel continued to stumble forward as he approached the goal line, finally diving into the end zone to put the Cats up for good.

“That was a huge drive for us. (I was thinking), ‘just catch the ball, get upfield and get as many yards as I could,’” Nagel said. “Everything developed nicely.”

Thorson then connected with sophomore superback Cam Green to convert the ensuing two-point conversion — which is mandatory from the third overtime on — to give NU some breathing room defensively.

Gaziano and Hall rendered that point moot, however, as the Cats danced off the Ryan Field grass with another dramatic victory and their first triple-overtime win ever.

“I think back to playing NCAA Football (video games) and going into triple overtime with my brothers,” Thorson said. “This is something I’ve always wanted to do. It’s awesome.”