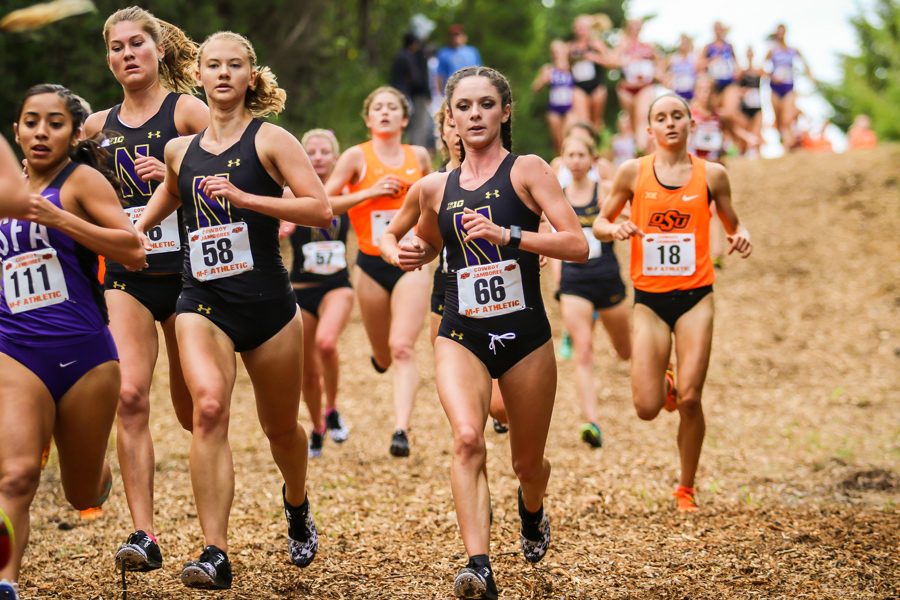 Amanda Davis (right) runs next to two teammates. The freshman and the Wildcats will head to Indiana this weekend for the Big Ten Championships.

Through three meets this season, Northwestern’s sophomore duo of Aubrey Roberts and Sarah Nicholson have led the pack. But as the Wildcats prepare for familiar foes at Sunday’s Big Ten Championships, depth promises to be essential.

NU will race on Indiana’s home course Sunday against a field that includes No. 9 Penn State, No. 10 Michigan and No. 17 Wisconsin. The race marks the beginning of championship season for NU and will see the Cats compete in their third 6K of the season.

Nicholson — who finished 70th at NCAA Pre-Nationals in Louisville, Kentucky, two weekends ago — described the Big Ten as very competitive, with six of the 14 teams ranking in the top 30 nationally.

“This is going to be a lot smaller of a meet and I’m actually looking forward to it,” Nicholson said. “It’s going to be a race where you’re with a pack, you’re trying to make moves and race with strategy in mind.”

Nicholson added that she’ll look to runners from Indiana and Penn State to gauge her performance.

Senior Andrea Ostenso, who placed 12th at NU’s opening race this season, said she is looking forward to the smaller number of competitors and the team’s depth for this race.

“We have Sarah and Aubrey who are extremely talented,” Ostenso said. “But we also have a pack of girls who are working really well together and are not too far behind our top two girls. I’m excited to see what we can do.”

In NU’s previous races, Haynes stressed the need for the team’s secondary pack to finish closer to Roberts and Nicholson. Sunday, against a talented field, she again said the Cats need to close the gap.

With NCAA Regionals on the horizon, the team’s finish will impact its end-of-season schedule.

“The expectations are to … finish somewhere between the seventh and ninth range,” Haynes said. “It is a race of about 90 people, so there is no hiding. Everybody matters in this race.”