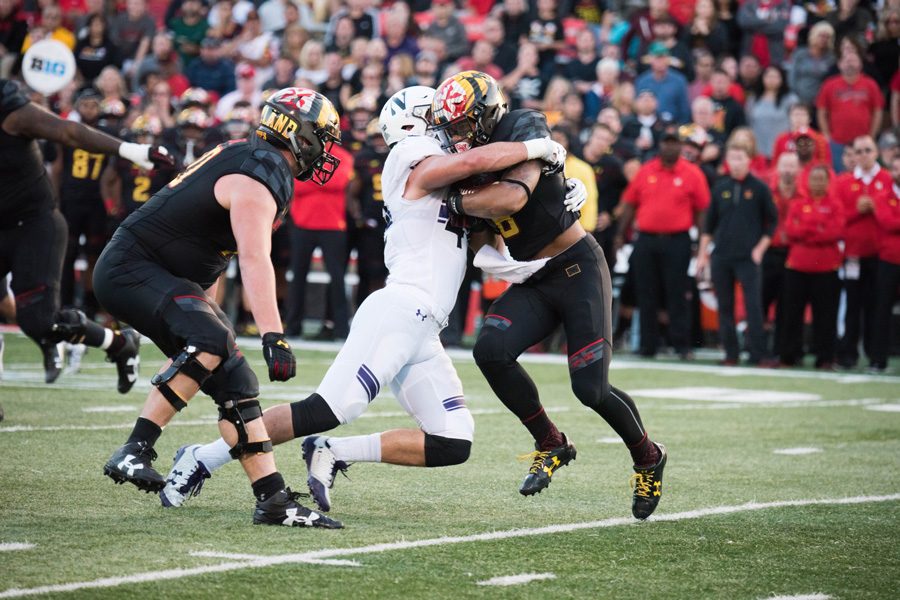 Paddy Fisher tackles a Maryland player in Northwestern’s game against the Terrapins earlier this month. The redshirt freshman linebacker has stepped up this season.

He’s no Anthony Walker, at least not yet. But redshirt freshman linebacker Paddy Fisher is doing his best impression of the graduated All-American through Northwestern’s first seven games.

Fisher has appeared in every game so far this season and leads the Wildcats with 56 tackles. That’s an impressive total, especially given that veteran linebackers Nate Hall and Brett Walsh trail by five and 16 tackles, respectively.

For Fisher, it’s all about seizing the opportunity presented to him.

“I’m just trying to stay on top of my game and not get complacent with anything that happens,” Fisher said. “Trying to lead this group of guys that I would give my heart for on the football field and just help them get better.”

Walker departed with one of the most prolific careers in NU history. The first Wildcat to leave for the NFL Draft before his senior season since running back Darnell Autry in 1997, Walker headed a prolific front seven in 2015 and 2016 before bouncing to the NFL. The Indianapolis Colts selected him in the fifth round in April.

Fisher said he spent extra time going over tape and doing extra reps with sophomore linebacker Nathan Fox, one of his close friends on the team. Having a teammate like Walker, even if only for one season, was a huge benefit for Fisher, the redshirt freshman added.

“I learned a lot from Anthony, as a person and as a football player,” Fisher said. “He taught me a lot with fundamentals and just a lot of formation and gameplan stuff, what to do in certain situations and how to take on blocks. Just little stuff like that with fundamentals.”

Fisher’s hot start has impressed his teammates. Hall, who has appeared in every game for the Cats since the start of 2015, said Fisher does a good job staying focused and “in the moment.”

“He came along real fast,” Hall said. “He’s just got natural instincts as a linebacker, you could kind of see it in his tape as a high school senior, but that’s obviously translating to the college level. … I love the way he’s coming along and he’s starting to play well consistently.”

Fisher appears to have locked down the middle linebacker spot, at least for the time being. True freshman Blake Gallagher has started amassing playing time, but only to give Fisher a breather.

But looking ahead, Fisher said he only wants to improve.

“When I’m on the field, and I see guys around me making plays, and my D-line is playing their tails off, and the secondary is making plays, that’s what keeps me going,” Fisher said. “It makes me want to play for these guys even more and help them get better, too.”