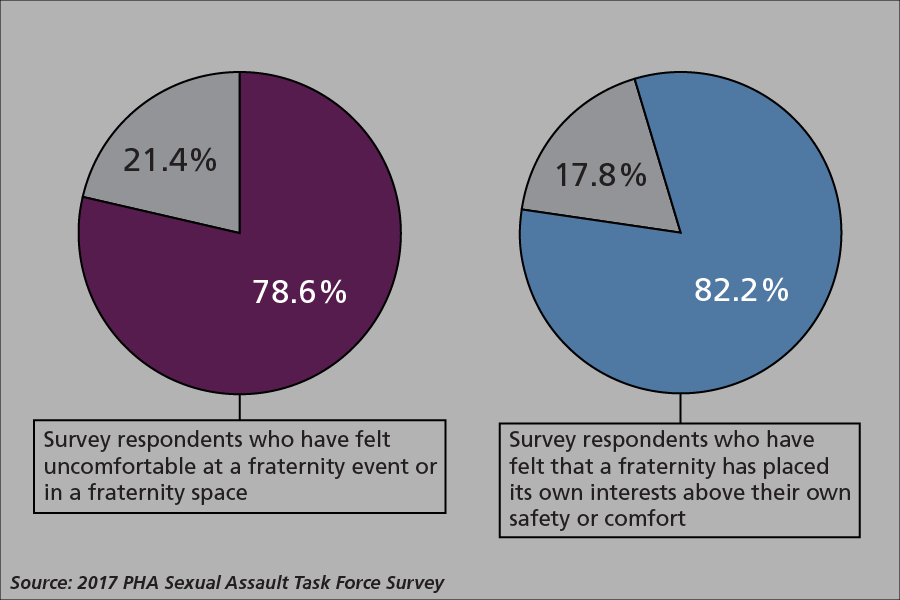 A Panhellenic Association survey found that more than three-quarters of respondents have felt “uncomfortable” in a fraternity space, or that a fraternity has placed its own interests above their safety.

The survey included multiple choice questions and free-response sections for women to write about their experiences.

Medill junior Juliette Johnson, who has worked for The Daily, said the survey helped illustrate how the PHA community was feeling after the conclusion of an investigation into allegations of druggings and sexual assaults. The University ended its investigation of Sigma Alpha Epsilon fraternity and another, unnamed fraternity in March.

“In some way, this survey was a way for the women in our community to be able to make some action after feeling powerless in a situation where it felt like the University wasn’t responding in way that we thought they should,” Johnson said.

She added that the data wasn’t meant to shame anyone, but instead spur conversations about improving safety in Greek life. She said the data didn’t particularly shock her, which was sad.

Berman said the anonymous survey showed that issues are widespread across many fraternities.

“Having all of these responses and data in one place has made it much easier for us to bring this information to fraternity men without having to ask as many women to be vulnerable,” Berman, a Weinberg senior, said. “But it does allow us to communicate and really drive home in a way that is both quantitative and qualitative.”

The Weinberg senior added that the survey results are a compelling way to talk about a difficult subject.

“We’ve had so many conversations about the general topic of sexual conduct and about gender dynamics in Greek spaces,” Kullavanijaya said. “Until this survey came out, they had been either hypothetical or they had been with one or a few voices in a room. … But (with the survey) at least we can kind of see that this is a community-wide problem.”

Changing the culture of Greek life is difficult, said Men Against Rape and Sexual Assault president Shan Chen Pu. The Weinberg senior added that analyzing and responding to the survey data can help.

Pu said he wasn’t surprised by the data, and hoped it would lead to empathetic dialogue.

“We should recognize the amount of emotional, and not just logistical, but emotional work that went into creating the survey, and conducting the survey and then analyzing the results,” Pu said. “That’s an incredibly difficult thing to do.”

Berman said before the survey, there seemed to be an increased interest from fraternities to understand the experiences of sorority women.

Moving forward, she urged fraternities to acknowledge that rape culture affects all chapters.

“To men, I would ask that they keep an open mind … and be aware of their own impulse to be defensive,” Berman said. “Those are some of the most important and fundamental pieces we will need from the people seeing the data.”