Volleyball: Wildcats hope for bounce back against Rutgers 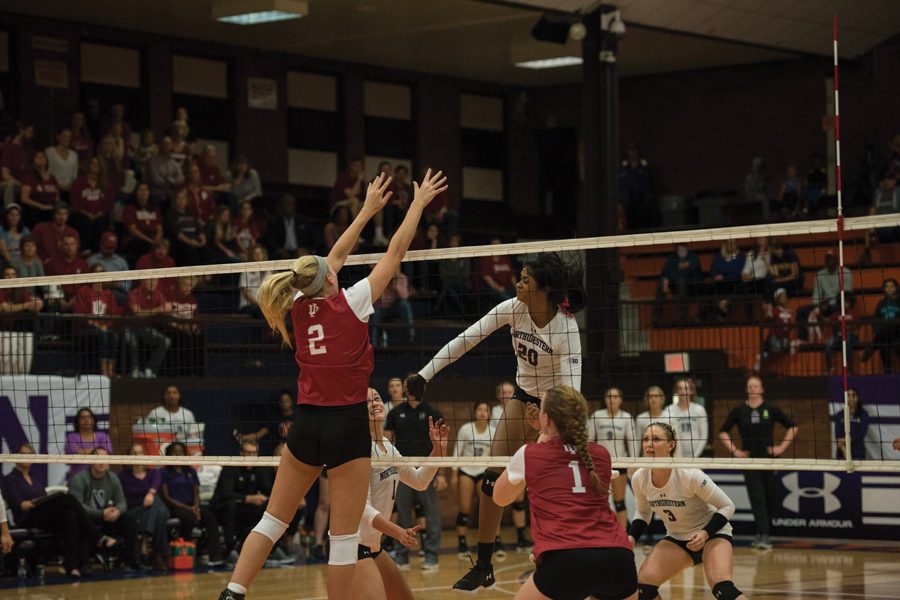 Alana Walker takes a swing. The freshman middle hitter the the Wildcats will face Rutgers on Wednesday.

Northwestern is starting to fall back into a familiar pattern.

This will be the second meeting this season between the Cats and the Scarlet Knights. On Sept. 29, NU stormed into Piscataway, New Jersey, and easily dispatched Rutgers with a 3-0 sweep. Abbott led the way with 13 kills on just 23 attempts, freshman middle hitter Alana Walker added seven kills on 10 attempts and senior setter Taylor Tashima had 32 assists.

Since that win, NU has won just five sets in seven matches and now sits third to last in the Big Ten, ahead of only Indiana and the Scarlet Knights. The Cats bested the Hoosiers on Oct. 6 for their only other conference win of the season.

Going into Wednesday’s match, Walker said NU is still confident in its abilities.

“Rutgers is a team we have seen before and we won, but we definitely need to capitalize on the fact that we have seen them before,” she said. “This would be a good win for us, going into it with a full set of confidence but also playing to our abilities and taking advantage of knowing that we are the better team.”

The Cats will need to lean on Abbott, who leads the Big Ten with 4.34 kills per set, and freshman outside hitter Nia Robinson, who sits at 12th in the conference with 3.35 kills per set. NU is one of only two Big Ten teams with multiple players in the top 12.

NU is coming off a pair of particularly tough weekend matches, where the Cats were swept by both No. 7 Nebraska and Iowa. But Abbott said the team is still looking forward to the rest of the season.

“You need a short memory in this conference,” she said. “We need to improve upon things we did well and not think about things we didn’t do well and keep getting better at our own game.”

Coach Shane Davis, looking for improvement in his second season at the helm of the program, said NU needs to focus on learning how to play with leads.

“We have done a great job, it has been a little bit of a theme, of getting a lead against really good teams and then giving up an easy run,” Davis said. “This week and this next few matches we got to figure out how to not only get a lead, which we have been doing a good job with, but keep that lead and allow ourselves to finish off those sets.”