Field Hockey: Wildcats take on Rutgers in first round of Big Ten Tournament 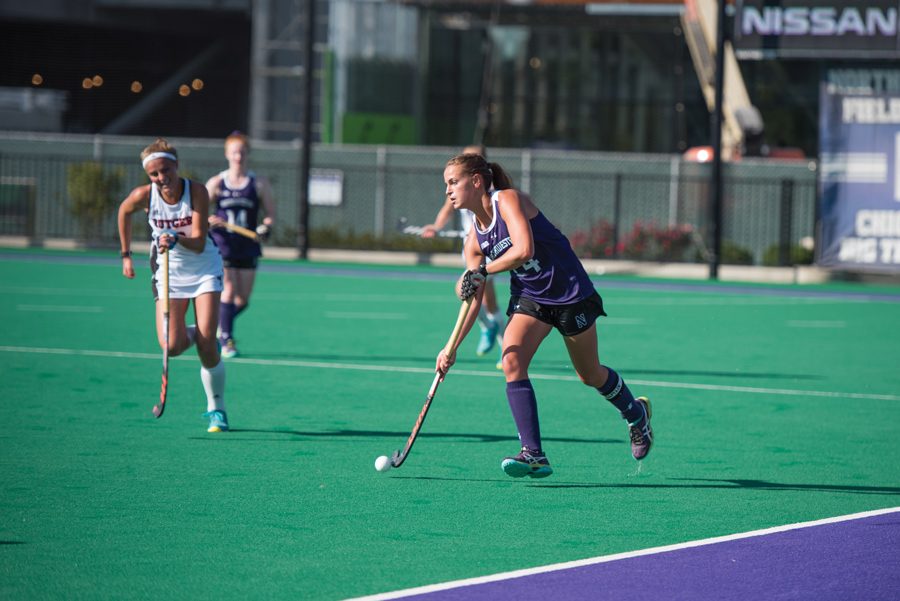 Sophia Miller looks up field. The senior will look to prolong her career this postseason starting with Sunday’s Big Ten Tournament opener against Rutgers.

There’s only one way for Northwestern to guarantee itself a spot in the NCAA Tournament this season — win the Big Ten Tournament.

That quest starts Sunday at home against fifth-seeded Rutgers. The fourth-seeded Wildcats (13-5, 6-2 Big Ten) took down the Scarlet Knights (9-8, 3-5) 3-2 at home earlier this season and will look to repeat that performance in the postseason.

“We definitely can’t take them for granted this time around,” senior defender Sophia Miller said. “We have to come out on the front foot if we want to beat them again. It’s hard to beat a team twice.”

The first time around, NU made sure to take the visitors seriously, coming out and firing seven shots in the first half while allowing only one in return. In the second half, however, the Cats let up a little bit, allowing Rutgers to get off six shots and score two goals.

In that 3-2 victory, NU got significant contributions from its seniors. Miller dished two assists, with her second coming on midfielder and fellow senior Elena Curley’s game-winning goal. Now, they’re both staring down the final postseason of their careers.

“It’s sad. I’m really not ready for it, but our team definitely is,” Curley said. “I wish I could play four more, but we’re coming into this one so much stronger than we did last year. Our team hasn’t peaked yet, which is fantastic.”

On the opposing side will be a Rutgers attack headlined by midfielder Daphne Groothuis, who leads the team in shots, shots on goal and assists. She also is tied for the team lead in goals.

Groothuis was held off the score sheet against the Cats in September, but other key contributors stepped up for the Scarlet Knights.

Fellow midfielder Linde van Schaik — who’s tied with Groothuis atop the Rutgers scoring leaderboard — opened the scoring for the visitors while defender Austyn Cuneo, third on the team in points, recorded both Rutgers assists.

“It was a real battle,” coach Tracey Fuchs said. “They’re a tough team. They have a lot of kids who can really hit the ball hard, so we need to really work on intercepts and playing in lanes this week.”

Recently, however, the Scarlet Knights have hit a rough patch. In their past three matches, they’ve lost by a combined score of 12-1, with their only goal coming in a 4-1 loss to third-seeded Penn State.

NU, on the other hand, comes into the match having won seven of its past eight matches, with the only loss being a slim 1-0 defeat in Ann Arbor against No. 3 Michigan. Rutgers lost 5-0 in Ann Arbor on Oct. 6.

The bad news for both teams is that the winner of their quarterfinal match will likely have to face the top-seeded Wolverines again. Michigan will take on either Ohio State or Indiana — the eighth and ninth seeds — in its quarterfinal matchup. The Wolverines already shut out both those teams in victories during the regular season.

As they near the postseason, the Cats aren’t looking too far ahead just yet, instead opting to focus on their final home match of the year.

“We know our field; we love our field,” Fuchs said. “We’re going to have the home crowd advantage, so we’re looking forward to it. The kids are comfortable. Nothing much will change, and we’ll be ready to play on Sunday.