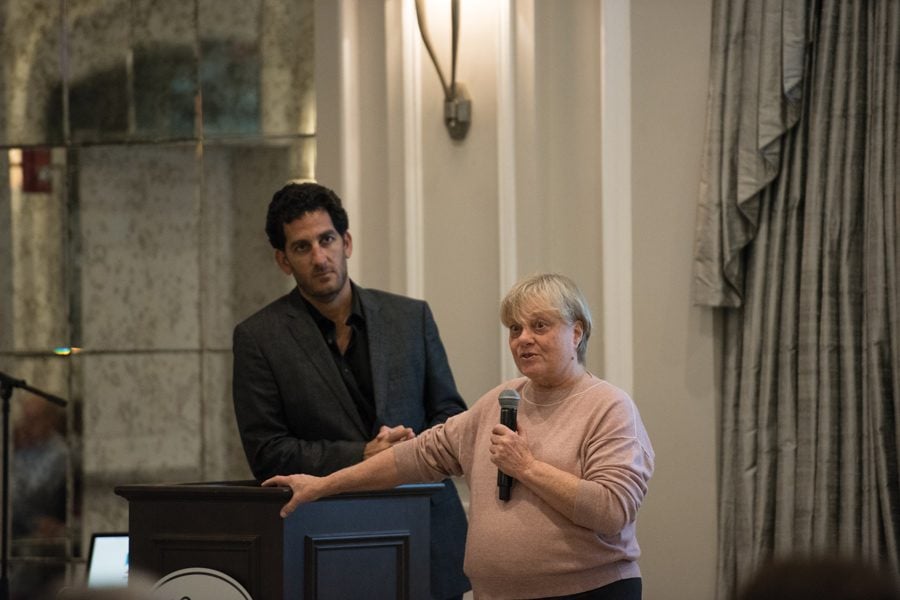 Ald. Judy Fiske (1st) addresses residents who expressed concern about a proposed tower on Chicago Ave. Fiske invited the building’s developer to a meeting to discuss the proposal.

Developers for the building presented their plans to an audience of about 80 people at The Merion, a luxury senior living home across the street from the planned development. The proposed building would include 215 residential units and surpass Park Evanston as the highest building on the block by about 25 feet, said Tim Kent, a partner at the architectural firm that developed the plans.

Jeff Michael, owner of The Merion and the site of the proposed development, said the luxury residential complex would target higher-income and “empty-nested” residents. However, he added that he is open to considering other resident populations. Michael said he hopes to change the current “tired” retail center at 1621 Chicago Ave. and fill the “missing tooth on an otherwise beautiful block.”

“Our vision is to build the most beautiful and most luxurious residential tower that has ever existed in Evanston,” he said. “It will change the complexion of this block for the better and provide a level of living experience and services that simply do not exist anywhere else in Evanston.”

Kate Poole, an Evanston resident who attended the event, said she disapproved of the building’s height and the shadows it would create.

“You are changing the nature of our downtown and our community,” Poole said. “The farther you go, the more opposition you will get.”

After receiving applause for her comments, Poole urged Michael to explore alternatives that would lower the building’s height.

Michael, however, said the building would fit with the rest of the Evanston skyline. He said he is “all for … preserving the charm and the history of this community.”

Though some residents supported the luxury tower — which includes amenities such as a fitness center, outdoor grilling area, swimming pool and valet parking service — others expressed concerns about traffic and interference with the existing bike lane.

A porte cochère would allow cars going to the tower to avoid stopping in the bike lane when pulling off the main road, Michael said.

However, Evanston resident Carl Klein said, cars would still have to cross the already dangerous bike lane, which is located on a busy street.

Evanston resident Michael Poulos said towers like this one do not belong in Evanston.

“I don’t think Evanston should be a city of skylines,” Poulos said. “If you want high-rises, we have a place for it –– downtown Chicago.”

Fiske spoke directly to meeting attendees and said she called the meeting to confirm the sentiment she suspected from 1st Ward residents.

“We need our downtown to keep renewing itself but in a way that doesn’t destroy the character of Evanston,” Fiske said. “We can’t say no to a developer … but hopefully they’ve listened to us.”

Once Michael submits a formal application, the plans will go to a project review committee before recommendations are made to City Council.