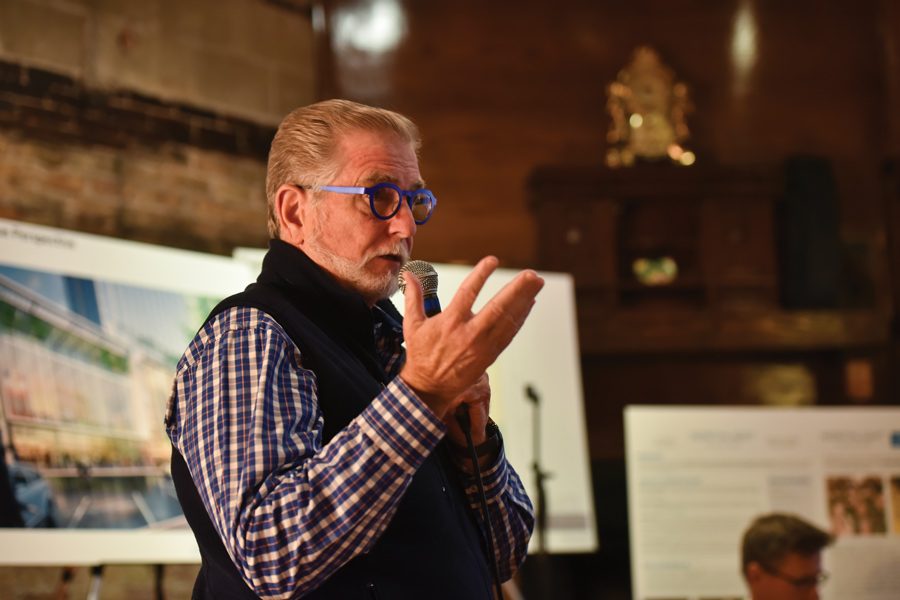 BJ Jones, Northlight Theatre’s artistic director, talks about the the proposed project in downtown Evanston. He said the Evanston location would allow the company to experiment with new work without worrying about its financial implications.

Evanston residents voiced approval for the return of Northlight Theatre to the city, but expressed concerns over the mixed-use development and its potential impact on the downtown area at a Tuesday discussion.

The community dialogue, organized by Mayor Steve Hagerty and hosted at Bourbon ‘N Brass Speakeasy, allowed residents to engage with both Northlight directors and building developers. Hagerty said the discussion was meant to give developers feedback before they formally introduce it to the Design and Project Review Committee.

The proposed mixed-use development — located in the 1700 block of Sherman Avenue between Clark Street and Church Street — would include two theaters, a street-level restaurant, a boutique hotel, residential units and a parking garage.

The project would bring back the nonprofit theater company — originally founded in Evanston — from Skokie, where it has been for the last 20 years. However, it would also force several businesses like Campus Gear, The Gap Inc. and Bookends & Beginnings to either relocate or close.

Constance Porteous, an Evanston resident who attended the discussion, told The Daily that while she “loved” Northlight and supported its return to the city, the current project raised some issues.

“My major concern is the change of the look of Evanston,” Porteous said. “As someone pointed out, (the project) comes to look more like LA or downtown Chicago than the quality town that it has been in my years living here.”

BJ Jones, Northlight’s artistic director, said moving to a location in Evanston with smaller “laboratory” spaces would allow the company to do more new, experimental work.

“We’re looking for the opportunity … to do that work in a smaller space where the economic impact and pressure is not so heavy on our bottom line,” Jones said. “We need a theater lab and a couple of rehearsal spaces to be able to do stuff in development without disturbing our regular five-play season.”

He added that the proposed location, which is more accessible by public transit than the current Skokie location, would increase inclusivity by attracting people without cars.

The project — spearheaded by Farpoint Developers, Skidmore Owings & Merrill and RATIO Design — would generate about 200 full or part-time jobs per year and more than $100 million in spending over a 10-year period, according to a 2015 economic impact study conducted by Hunden Strategic Partners.

Despite this, several residents voiced concern about the project’s size and its impact on Evanston rent prices, echoing similar criticism of other major development projects.

Susan Barrett-Kelly (SESP ’11), an Evanston resident who attended the event, told The Daily she worried that developers might not adequately support the businesses that would have to close or relocate.

Still, Barrett-Kelly said she supported the project in light of future challenges the city may face, like declining retail sales. She said though she enjoys the shops at the proposed site, the project would create a more robust downtown area “for years to come.”

“One of the things you can’t get in a box from Amazon is live theater and a dinner out,” Barrett-Kelly said. “I want us to be vibrant for the next 25 years.”

Correction: A previous version of this story misstated the location of the community dialogue. It was held at Bourbon ‘N Brass Speakeasy. The Daily regrets the error.