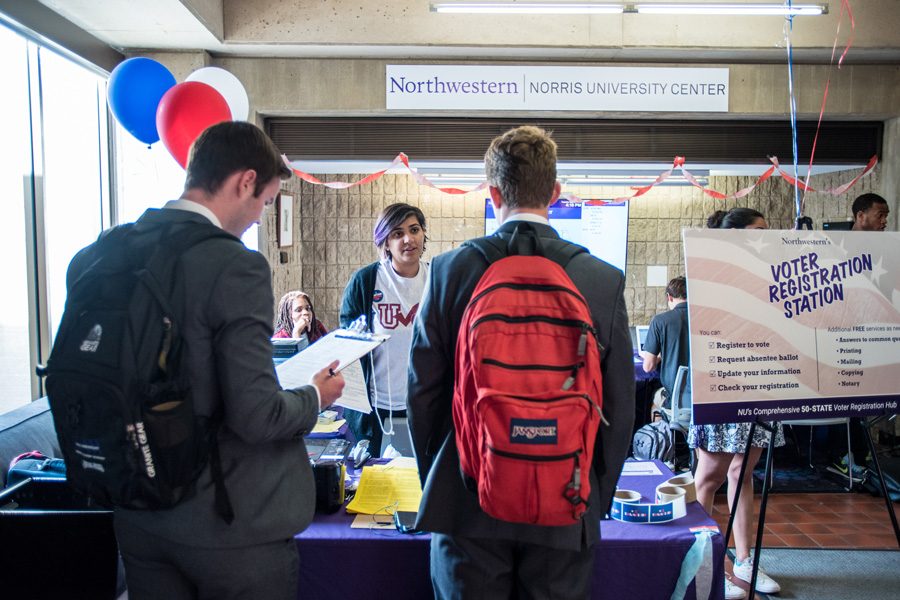 NU Votes volunteers speak to students at a voter registration booth in September 2016. Northwestern won five awards for civic engagement at a ceremony Thursday, including the highest increase in voter registration among all U.S. universities.

Northwestern won five awards for civic participation Oct. 19, including one for the highest increase in voter registration among U.S. universities, according to a news release.

NU also won the awards for the highest voting rate among large, private four-year institutions and the standout administrator award. The accolade recognized work done by Rob Donahue, associate director of the Center for Civic Engagement, according to the release.

“We’ve worked with colleagues across campus — students, faculty, staff, administrators and community partners — to try to make responsible civic engagement a cultural norm at Northwestern,” Donahue said in the release.

“Folks often dismiss young people as apathetic,” Donahue said. “But this work demonstrates that when young people are given a consistent, accessible and understandable opportunity to register to vote, the vast majority will choose to do so. And that, in turn, has a substantial impact on the youth vote.”

Donahue attributed the University’s success to the Center for Civic Engagement’s NU Votes program. The program, created in 2011, hosts student registration stations and events throughout the year to create “awareness and enthusiasm” for civic engagement, according to the release. The center also runs “Voter Vans,” which shuttle students to polling stations during elections.

This year, NU Votes representatives held voter registration stations throughout campus on move-in day. By the end of the day, more than 96 percent of eligible freshmen were registered to vote.

Steffany Bahamon (McCormick ’17), a former Center for Civic Engagement fellow, told The Daily that NU Votes not only promotes the importance of voting, but also makes the process easy.

Bahamon, who volunteered with the voter registration stations and “Voter Vans,” said the awards mean a lot to her personally and to the University as a whole.

“It means that the Center for Civic Engagement has made a pretty big difference on campus,” Bahamon said. “It shows that Northwestern students are also becoming more civically minded and more engaged with the world at large.”