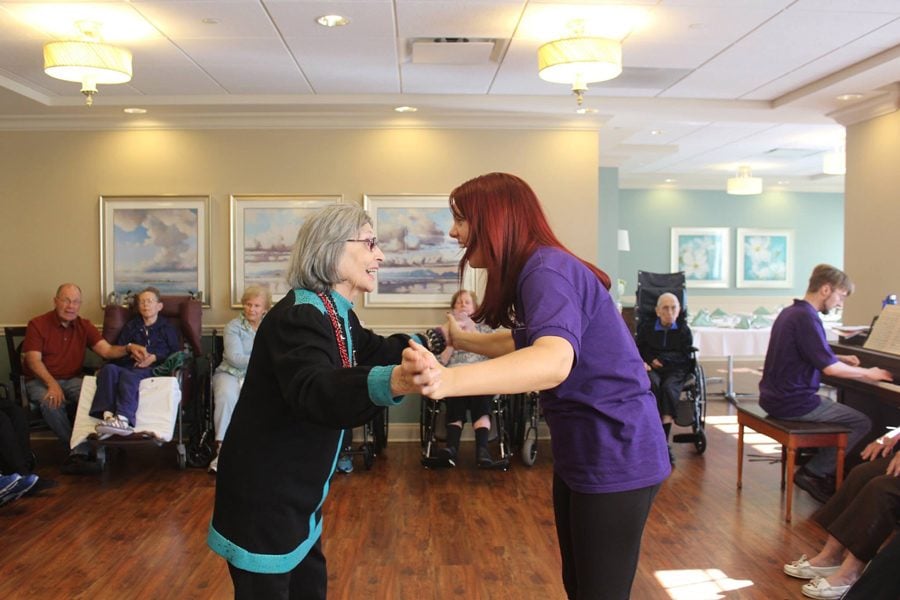 Singer Caitlyn Glennon (Bienen ’11) holds hands with a Songs by Heart Foundation resident. Since the inception of the program in 2015, the organization has grown from three locations to over 30 nationwide.

While music is typically said to heal the soul, the Songs by Heart Foundation is using music to restore what medicine can’t for millions of people with dementia.

Songs by Heart, launched in 2015, is a nonprofit organization that brings professional musicians to memory care facilities in hopes of improving the quality of life for people with dementia.

Bienen artist-in-residence Nancy Gustafson, the organization’s founder, said she was inspired to create the nonprofit after witnessing music’s extraordinary effects on her mother, who struggled with advanced dementia.

After her mother was diagnosed and later moved to a memory care facility, she gradually became less responsive as the disease progressed, Gustafson said. Her mother lost the ability to connect with other people and recognize her own family.

“I found it absolutely devastatingly heartbreaking to see my mother looking so sad and so lonely and so confused,” Gustafson said. “It was so difficult because I couldn’t connect to her on any level. … I would talk and she would just kind of stare.”

After several visits with no progress made, Gustafson turned to music, a love that she shared with her mother. She pulled her mother’s wheelchair next to the piano and tried to play and sing along to songs from an episcopal hymnal she knew her mother would recognize.

While Gustafson was playing, she said she soon realized her mother was singing along. After about 15 minutes at the piano, Gustafson turned to her mother, who criticized her piano ability commenting, “You know, that’s not very good.”

“Not only did she talk and put two words together, but she also responded and said something she would’ve said to me when I was practicing the piano,” Gustafson said. “I couldn’t believe it because all of a sudden there was my mom.”

When Gustafson came back the next month and saw repeated success, she knew she had found something special, she said. With the help of Emily Becker (Bienen ’09), Gustafson began a research project at three Presbyterian retirement homes in Evanston, Lake Forest and Arlington Heights. From the research gathered at these sites, Songs By Heart was born.

In the two years since the program’s inception, the organization has grown from serving these three locations in the Chicago area to over 30 sites across the United States, said Becker, the group’s artistic administrator.

Gustafson said the organization frequently receives requests to expand to other locations across the country, and the nonprofit is currently trying to fulfill those needs. Ideally, Gustafson said she envisions the program being offered for every person with Alzheimer’s or dementia at least five days a week.

Becker added that one of the nonprofit’s main goals is to expand its support staff in various regions so Songs by Heart can reach even more people who have dementia. The organization has seen tremendous success in getting residents to engage with the program, she said.

“I’ve seen people who are not able to speak or to form coherent sentences before a session and then throughout the session, they sing words and then after you can ask them a question and they can form an actual answer,” Becker said. “Their thoughts seem to be a little bit more organized than before we did the music.”

The program’s sessions are typically 45 minutes, in which one singer and one pianist lead a sing-along with audience members. Each singer develops a unique song list each day, choosing the favorite songs of the community — ranging from Disney classics to Frank Sinatra ballads.

Bienen junior Anna Piparo, a singer in the program, said she joined the organization with the hopes of putting her musical background to a good cause. Seeing how much music impacts residents is something that is “super special” to be a part of, she said.

“You’re singing songs they know from when they were growing up … and their faces just light up and they’re singing the words and they’re holding your hands when you’re dancing with them,” Piparo said. “You bring this familiar music into their lives and their world changes for that (session).”

Gustafson said she recruits singers who have “a beautiful voice, a wonderful smile and a huge heart.” All singers are trained by the organization’s certified music therapist, who teaches singers how to interact with residents and connect with them through music and physical contact.

Songs by Heart takes music therapy “one step further,” Gustafson said. Unlike most music programs, which are non-interactive or less regular, the organization allows residents to directly engage with singers and form intimate connections with them, she said.

Gustafson added that until there is a cure for dementia and Alzheimer’s, the way to improve the lives of people with these diseases is “just a song away.”

“If singing songs makes their lives that much better, then let’s get them all singing,” she said.