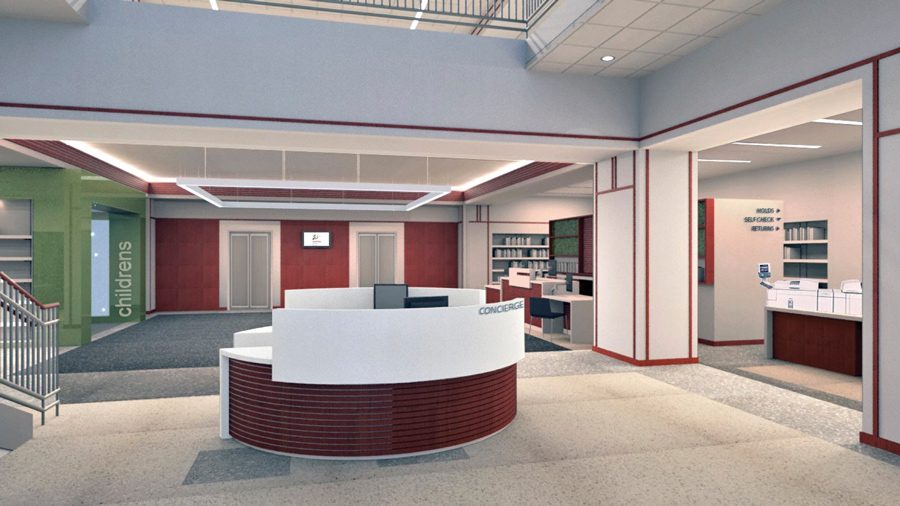 A rendering of the proposed renovation for the main branch of Evanston Public Library. EPL’s director, Karen Danzcak Lyons, said at the meeting that the renovation is estimated to take about 18 months and will likely start in 2018 pending City Council’s approval of the budget.

Danczak Lyons said at the meeting that the renovation is estimated to take about 18 months, and will likely start in 2018 pending City Council’s approval of the budget. She added that the library will remain open during construction, though certain sections will be closed for renovation.

The redesigned space will include private and semi-private workspaces, community meeting spaces and new seating areas. Additionally, the renovation will help the library create a new teen center, a space for providing social services and an art gallery.

Additional features will include a DVD vending machine, a permanent space for book sales and self-check desks for patrons to check out materials with greater ease.

EPL was last renovated in 1994, before widespread internet and technology use, according to a staff presentation. Danczak Lyons said it had been awhile since electrical and internet renovations were made, and that the building needs more meeting and collaborative spaces.

She added that in 2016, roughly 1,600 people visited the library every day, and staff were struggling to meet the needs of all patrons in the existing building.

Danczak Lyons said many of the library’s collections will be consolidated to the second floor, with the third reserved for meeting rooms. The library plans to add a cafe to its downstairs level and foster stronger integration of technology throughout the building, she told The Daily earlier this month.

During a library board meeting on Oct. 18, Danczak Lyons said the current renovation plan is the most cost-effective and efficient option, as it can be funded fully through general obligation bonds — bonds issued with the belief that the city will repay its debt obligation through taxation or revenue from projects.

Danczak Lyons said that the renovation would be covered by new bonds in Evanston’s proposed 2018 budget.

Assistant city manager and chief financial officer Marty Lyons told The Daily after Monday’s meeting that aldermen will vote on the renovation as part of budget discussions scheduled over the next month.

EPL board member Shawn Iles told The Daily he hopes the city will authorize the renovations and help the library meet its growing needs for programming and resources.

“We like to see the library as a sort of third space,” Iles said. “It’s not home, it’s not work. It’s a third space where people can meet and collaborate and share ideas.”